Paul Otellini opened up the Fall IDF in San Francisco with a keynote focusing on all upcoming technologies including the 65nm to 45nm process, Penryn and Nehalem, power efficiencies, WiMAX, Havok benefits and more.

Intel’s Developer Forum turns 10 this year, and we are reminded many times as we walk throughout the Moscone Center in downtown San Francisco. This particular IDF is special for a few different reasons. We are at a point in time when the hardware landscape is changing drastically and new technologies are constantly being improved. We learned much about the Penryn and Nahalem microarchitecture at IDF Beijing this past April, but things have progressed very well since then, as we are discovering through various keynotes.

One of the more exciting events was an interview with Intel Chairman Emeritus Gordon Moore, who was a co-founder of the company in 1968. Greg will be covering the event in better detail, but it was quite something to hear opinions from one of the biggest innovators in the industry.

Day one kicked off with a packed auditorium and an hour-long keynote by Paul Otellini, President and CEO of Intel. Prior to the keynote, we were shown a quick video showcasing IDF from 1997 to 2006, which of course was quite a trip down memory lane. Once Paul took the stage however, he touched on Intel’s innovations over the years, including processors and their architectures, connectivity, memory and power. Of course most know the current situation of Intel’s products and the state of connectivity/power, but the slide gave us a clear glance at how much we’ve progressed since the original 4004 microprocessor.

Not surprisingly, one of the main focuses for the keynote and the entire conference in general is the move from 65nm to 45nm. By now, most everyone knows that Penryn is much more than a die shrink, but he really stressed that their High-K Metal Gate transistors is one of the reasons they are ahead of the competition. MG transistors have been were stressed as not being a simple upgrade, but a revolutionary new technique, one that they would not disclose in great detail. At this time however, they’ve already made tweaks to the process, and Nahalem and beyond will reap the rewards from that. 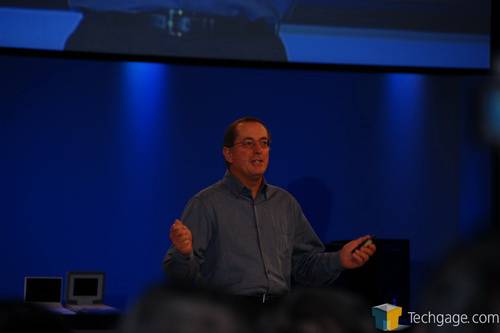 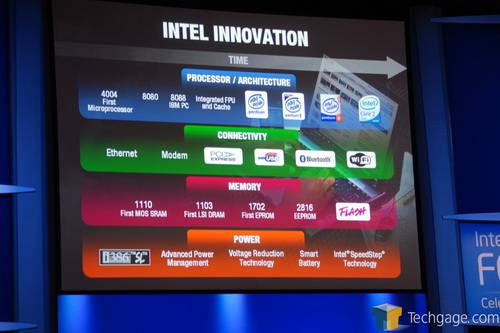 45nm means a lot of things. Less power, higher performance and far greater flexibility. On the slide that you can see below, there are many examples that show 45nm as being beneficial in every market, from SoaC all the way up to an all-in-one solution, such as Larabee. You might note also the Octo Core processor listed. This wasn’t unexpected, but at this present time is being thought of as a server CPU only, for obvious reasons. 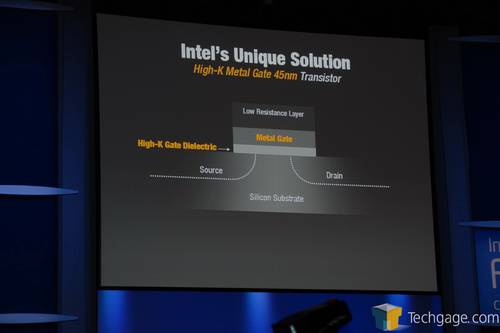 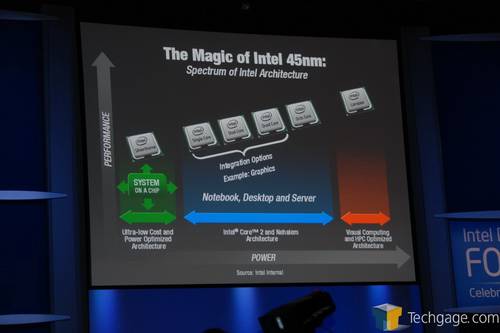 Paul also explained that Intel has made significant silicon improvements every two years since the 180nm processes in 1999. Moving from 180mm to 130mm and all the way down to 45nm is nothing short of impressive, especially while keeping on such a regular schedule. It was at this time that Paul displayed a 45nm Penryn wafer on stage, also stating that the official release date will be November 12, with production in full swing and shipments being prepared to head out to customers.

With Penryn so close to launch, a lot of attention was shifted towards Nehalem, the “Tock” of this product cycle. As we first found out this past March, Nahalem is a very modular architecture. While Penryn and other current Quad-Cores consist of two dies side by side, Nahalem will be built from the ground up and essentially become a native Quad-Core.

At this point, Paul invited Glenn Hinton, Chief Nahalem Architect to explain some of the benefits of 45nm. Not surprisingly, lower power and better performance were quickly touched on, but they settled on a slide that explained that processor yields are constantly getting better, as seen in the logarithmic graph seen below. This not only saves money but can increase throughput. 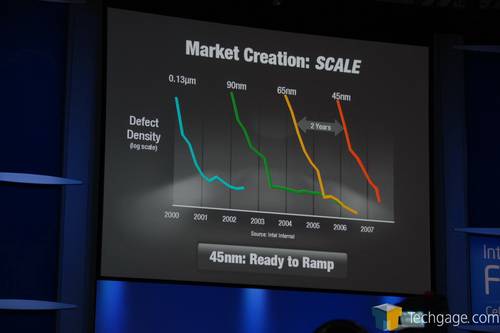 The next slide focused on Intel’s 45nm fabs. Currently, the only ones to currently be stamping out 45nm Penryns is D1D Oregon and Fab 32 in Arizona. Fab 28 in Israel is completing construction and will begin production in the first half of ’08, while Fab 11X New Mexico has a further way from completed construction and will begin production sometime in the second half of ’08. 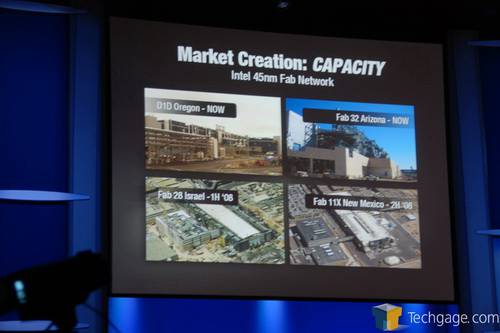 Although numerous points made throughout the keynote were note-worthy, one that caught my attention was Paul’s thoughts on desktop/notebook crossover. It’s his believe that in 2009, over 50% of computers purchased will be notebooks. These conclusions are all based on the graph below. 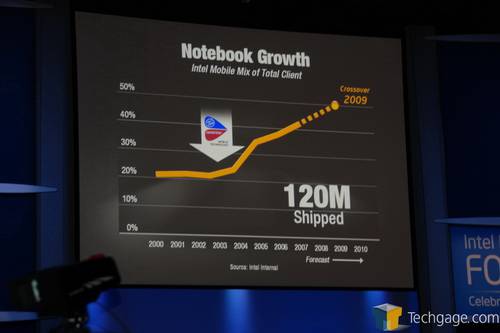 The growth since 2000 has grown gradually each year and will continue to do so.