Intel’s Developer Forum ended last week, and we are now finishing up our coverage of the event with this article. To wrap things up, we are taking a look at a few things we saw on the floor including lots of DDR3, anti-cheating technology, Asetek’s efficient OEM cooling and more.

With another IDF behind us, we slowly creep back into our daily routines whether we are ready to do so or not. As we decompress from the last weeks worth of walking and talking, we would like to take one last look at a few notable companies that might have gone unnoticed behind the announcements made by Intel about their upcoming architecture.

It’s easy to over look the fact that IDF is not only a celebration of all things Intel, but also a conference filled with many different partners, all showing off their goods and letting us know just why we need what they are selling. While much smaller that larger conferences, such as CES and CeBIT, the IDF does allow companies who have been working with Intel to show off what they have to offer. 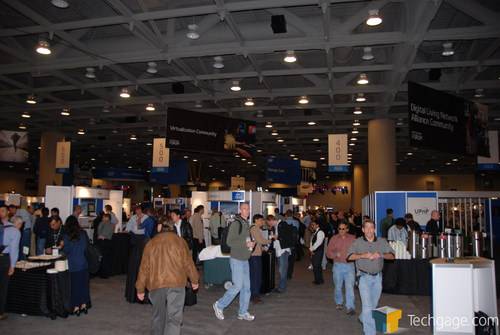 Many of these companies were geared towards the enterprise side of business. Fortunately for us, there were a handful of familiar faces eager to tell us about their latest enthusiast oriented products. Fighting through the crowd, we first made our way to the Embraco booth.

Not really a household name, Embraco has developed a small notebook cooler unlike anything that we have ever seen. Taking basic refrigeration technology found in any home refrigerator, Embraco has manufactured a simple cooler that is intended to sit under your gaming notebook and feed its fan with sub ambient air. The cooler is designed to help prevent CPU throttling in notebooks and other common performance decreases by keeping the temperature around the unit low. 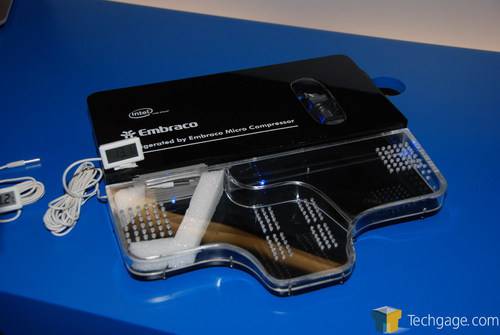 Using what we are told is the smallest micro compressor on the planet; the little piece cools the air that will eventually be pushed into and across the bottom of the notebook. 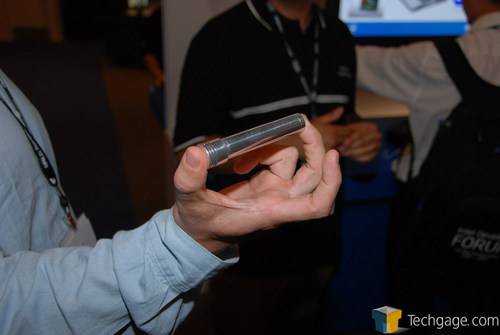 To demonstrate just how effective the Embraco was working, a small thermal probe was setup inside the plastic housing and was showing that the air leaving the chiller was a brisk 13.1°C (55.58°F). 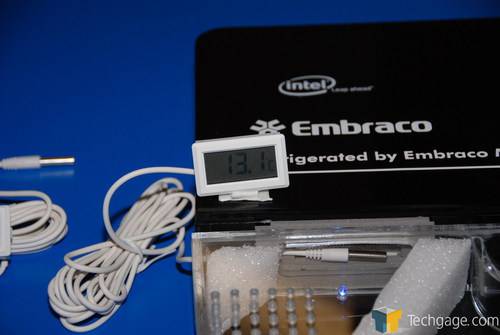 After a little digging, it turns out that Embraco is actually a compressor manufacturer so it might not be too far out of line to assume that Intel is actually working with Embraco on this project. Regardless of what initiated the production of this unit, Embraco is claiming that the “External Chilled Air Docking Station” enables the use of the coolest gaming notebook… pun most certainly intended. 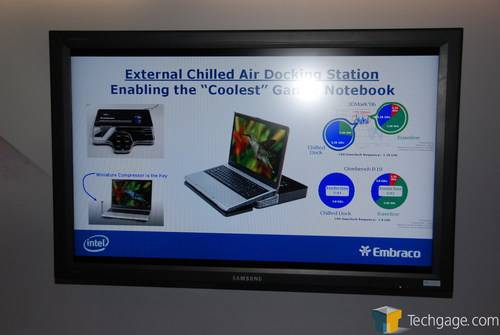 Look for the Embraco notebook cooler this holiday season for under ~$100. That price mind you, simply came up in conversation and is not at all implied as MSRP.

After the unique showing at the Embraco booth, we made our way to an inconspicuous booth with a pair of gaming desktops setup playing Quake III. Overhearing a previous conversation around those PCs, we stuck around to speak with the Intel guys running the booth. From what we were told, they are working on a new way to eradicate cheating on any servers that chooses to not allow it.

Using Quake III as an example, Intel was showing off their approach to catching cheaters… think Punk Buster with a completely different underlining technology. This tech will be able to recognize whether or not the cursor movement is coming from an I/O device such as a mouse or keyboard or if it’s coming from a program, such as an aimbot. If a suspected cheater is found, the server admins will be alerted, at which point, the appropriate action can be taken. This could include simply being booted or being banned from the server. 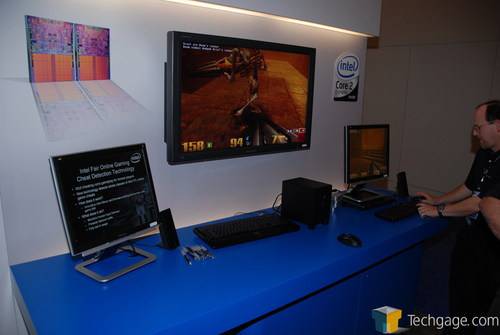 While many details are still not known, this is a technology that would be helpful and useful to those who spend a lot of time playing online games. It’s not fun getting owned by another player in an online FPS when you know very well they are using an AimBot. For those wondering about legal macros, the SDK will include support to recognize such actions from peripherals, such as Logitech’s G15.

It was admitted to us that this technology may never see the light of day, but I, and I am sure many others, are hoping that it will. Although there will always be work-arounds, they might prove more difficult for this technology, which could lead to a huge drop in cheaters. Is spending days on end trying to get a hack to function really worth it?