We’re back in San Francisco today for the next day of the Fall 2008 Intel Developer Forum conference, here at San Francisco’s Moscone Center West, and that means more keynote speeches. Today’s speech schedule included updates from the Ultra Mobility Group, Digital Home Group, and Software And Solutions Group at Intel, with a look at new products and services based on Intel technologies. While these departments’ contributions aren’t as sexy as Nehalem, they definitely account for a significant portion of Intel’s business. In this article, we’ll take a look at all three Wednesday keynotes in order.

To open for Ultra Mobility Group general manager Anand Chandrasekher’s keynote regarding ultra-mobile PCs and mobile internet devices (MIDs), David (Dadi) Perlmutter first took the stage to explain how the product categories come together to redefine a market segment that used to be associated almost exclusively with the notebook PC. During his introduction, Dadi presented a revised version of his graph from the previous day, with additional bars to represent UMPCs, netbooks, and MIDs, The purpose of the exercise was to show how the Ultra Mobility segment contributes to Dadi’s earlier prediction of 1 billion portable internet access devices to be sold next year worldwide.

Anand’s keynote speech focused specifically on the smallest portable devices enabled by Intel’s Atom processor, which include mobile internet devices, ultra-mobile PCs, and ‘netbooks’, which are ultra-small sub-notebook PCs designed to offer internet access capability in a small, affordable package. That market segment has been waiting quite some time for a capable processor in a miniscule power envelope, to enable visually-rich interfaces, web page rendering, and the ability to run an x86-specific operating system like Microsoft Windows. Now that Atom has arrived, there has been a rapid proliferation of devices to fill the niche. 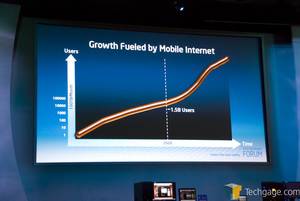 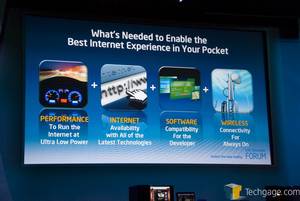 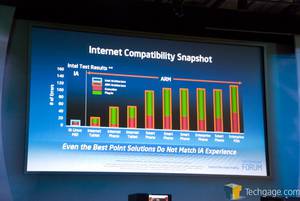 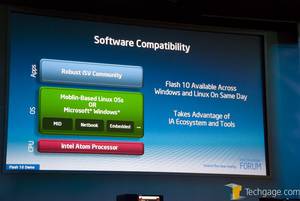 Among the devices on display was Panasonic’s Toughbook UMPC, whose ‘toughness’ was demonstrated inadvertently by Anand as he dropped the device on-stage while taking it from a Panasonic representative. Anand also demonstrated the ubiquitously-popular game World of Warcraft running on an ultra-micro PC with reduced graphics settings. Though WoW’s graphics are now several generations behind ‘state-of-the-art’, the ability of an Atom platform to support any type of 3D gaming at all is a promising sign.

Another area where we’re likely to see a growing Intel presence is in the consumer electronics world, where Intel’s new Media Processor CE 3100 promises to offer x86-based rich media applications built right into a television or a cable set-top box. The CE 3100 provides hardware-accelerated video decoding for MPEG-2, H.264, and VC-1 (which you might recognize as the three encoding formats used in 1080p video playback via Blu-Ray Disc), and audio decoding as well. This eliminates the need for additional CPU overhead devoted to accomplishing those tasks in software. The CE 3100 also provides 2D and limited 3D graphics acceleration in hardware for UI rendering. Toshiba and Samsung are already planning CE 1000 applications. 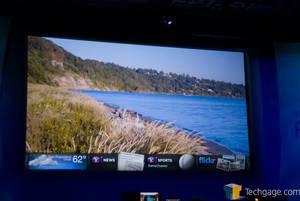 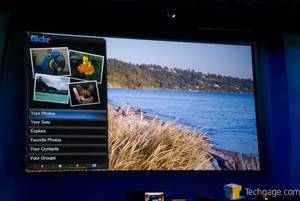 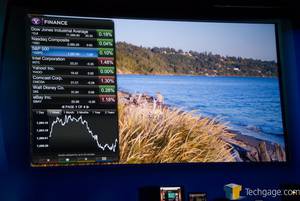 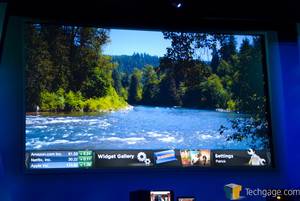 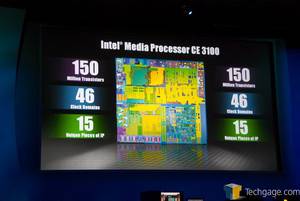 At this point, Eric was joined on-stage by a Yahoo! representative, and the two of them introduced a new application framework for televisions based on Intel Architecture (IA; this appears to be Intel’s newest way of referring to x86 technology) and the Yahoo! Widget Engine. Intel and Yahoo are calling this user interface the “Widget Channel”, and its purpose is to make web content available directly on the TV, while maintaining its simplicity. You wouldn’t want to keep a wireless keyboard in the TV room simply to use its interface, so the Widget Channel is designed for greatly simplified operation.

Kim concluded his keynote by announcing the formation of the Intel Consumer Electronics Network, which will provide engineering support for consumer electronics companies who embrace the Intel solution for delivering web-based content on consumer electronics devices. In a sense, this goes along with Pat Gelsinger’s earlier keynote, in which he described Intel’s goal to push the Intel Architecture into the embedded systems realm.