Renee James, “Developing for the Future of Computing”

The final Wednesday keynote was delivered by Renee James, Vice President General Manager of the Software and Solutions Group at Intel. Her first announcement addressed what many analysts agree to be a major problem in the current computing world – the transition to multithreaded software isn’t going very well, with true multithreaded solutions being limited to only very high-performance applications.

Toward the end of accelerating the software industry’s transition to true multithreaded applications and program functions, Intel is releasing a set of libraries and extensions for Microsoft’s Visual Studio development environment, which encompasses a broad array of programming languages. These new libraries and extensions make it simple to create applications that harness the capabilities of a multi-CPU system. There are four modules in the package, intended to assist with application design, coding, debugging, and optimization in the multi-threaded realm.

Renee next introduced Jeffrey Katzenberg, CEO of Dreamworks Animation SKG, who announced a new brand for a 3-dimensional computer-animated movie experience based on stereo-vision, called “INTRU3D”. Unlike the’dweeb’y-looking cardboard 3-D glasses used in previous attempts to create a three-dimensional movegoing experience, the INTRU3D glasses use polarized lenses, which preserve color accuracy, and appear very much like ordinary thick-rimmmed glasses. Jeff also stated that all future DreamWorks films would be released with INTRU3D as well as in the traditional 2-D projection format. 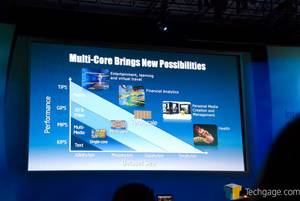 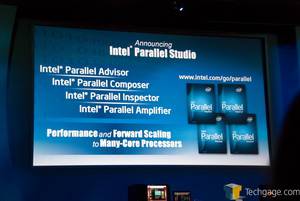 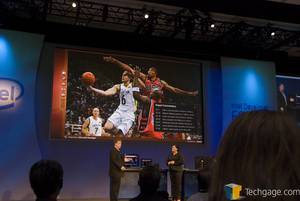 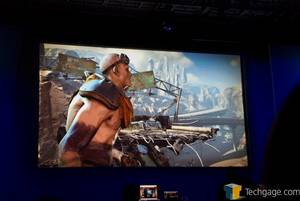 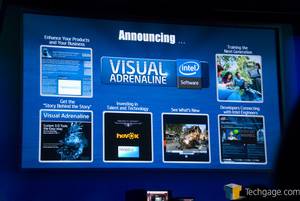 What Katzenberg announced next took the audience’s breath away – a tech demonstration of INTRU3D technology, based on a clip of the company’s Kung Fu Panda would be taking place, right there in the Moscone Center West’s third-floor auditorium. An enormous 16-foot-tall, wide-format screen began to roll across the stage, suspended from ceiling truss, and loudspeakers had been suspended along the side walls and back walls, to provide multichannel surround sound.

The 3-dimensional effect was surprisingly convincing, even at our seating position’s extreme off-axis angle to the screen. Forget what you remember about stereovisual 3-D movie technologies of the past – INTRU3D has been extremely well thought-out. Katzenberg also showed a clip of Aliens vs. Humans, Dreamworks’ first feature film to use INTRU3D.

Finally, James and Katzenberg jointly announced the formation of Visual Adrenaline, a new developer program created by Intel for visual computing developers, as well as the artists and animators.that make use of visual computing technology.

Wednesday’s keynote speeches wrapped up the complete set of new product and developer networking announcements for IDF, with the two Thursday keynotes looking at the broader state of computing technology as a whole – past, present, and future. We can’t help but feel that we’ve been witness to one of the most significant IDF conferences in Intel’s history.

This is partly because of the significance of the new Nehalem CPU microarchitecture, which will likely make a far-reaching impact on all future Intel CPUs, and will certainly define the state of the art in CPU design for the near term. But it’s also significant because of the multitude of different directions that Intel as a company is now finding itself pulled, as it develops purpose-built processors for the ultra-mobile, embedded, and desktop computing market segment, in a gambit to gain market leadership in all three – through the technical merits of its de facto industry standard Intel Architecture.