Depending on certain factors (none of which we can state until we actually know Nehalem’s limitations), all current DDR3 memory should work fine, as long as the rest of the system allows it, such as the QPI, or whatever limitation we might run into. DDR3-2000 has been found functional on a Nehalem rig, but it leads to the new quandary of whether or not it’s even needed. Today’s applications can’t even seem to make use of available bandwidth seen on the high-end memory kits available today, so will Nehalem essentially kill what is known as high-end RAM?

It’s hard to say. Latency won’t be much helped by the increased frequency, but the raw bandwidth will be. We are already in the ‘hardcore’ zone with 33,000MB/s, but faster RAM might very-well still improve performance in certain scenarios, such as the loading of massive photo collections, video collections, or anything that really taxes almost every component in your machine.

The new IMC is so efficient, Intel claims, that if you have an X58 motherboard, for example, you can install a single stick of DDR3 and almost match the overall memory bandwidth of a current dual-channel DDR3 configuration. Adding in a second stick will increase it further, with the third stick being the best overall solution. Although many Nehalem-based motherboards will offer four DIMM slots, it will actually become more of a downgrade at that point, due to how the triple-channel IMC operates.

Memory companies are already jumping on the Nehalem bandwagon, and are preparing to launch kits at the release of the new processor. It will be very common to see both 3GB and 6GB kits, although I’m sure there will be 12GB kits as well. The 3GB kits would better suit those with 32-bit operating systems, while anything higher would only function with a 64-bit one. In many regards, it only makes sense to go with 64-bit going forward. Even notebook vendors are beginning to offer Vista 64-bit by default, so it’s catching on quicker than ever.

What else can we say about Nehalem? Sadly, we can’t give specific performance comparison results, but it’s definitely not something that will truly disappoint. Like most new processor launches, it will improve performance in most areas, and excel in a few others… just like how Penryn’s added SSE4.1 instruction set helped it dominate video-related benchmarks. 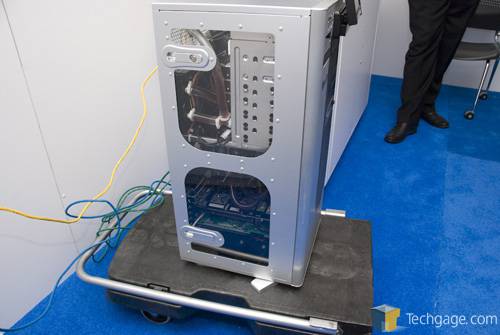 Hyper-Threading as we know it on Nehalem is not that much different than what we saw on the older P4 processors, but it is enhanced overall in very small regards. Overall, it’s not a bad addition, and in most single-threaded (and even a few select multi-threaded) applications, part of the performance increase seen likely be accredited to HT.

I should also touch on the picture above. Francois Piednoel is an Intel man that likes to have fun at work, and his projects he shows off at each show prove that. In this Thermaltake chassis, he has installed a serious gaming rig, complete with water-cooling. Oh, and there’s a secondary C2D-based system as well, which is used as a secondary PC for those times when you want to use a PC and not hear the noise. That case is big, and so is Francois’ imagination.