Got a guitar? Got an Android 4.2+ phone or tablet that supports USB OTG? Ever wanted to use your phone as a multi-effects unit for your guitar? Well you just might want to consider the IK Multimedia iRig UA.

It’s nice when hobbies can mesh. When you can take your love of technology and join it hand in glove with something traditionally more old school, analog even. That’s why I was intrigued by IK Multimedia’s newest iRig UA guitar interface for Android, as well as AmpliTube UA (for future reference I’ll be referring to the device as the UA, and the software that goes with it simply as AmpliTube, although please don’t mistake it for the PC version).

IK Multimedia pitches the iRig UA as “The first universal guitar effects processor and interface for all Android devices.” Supporting Android 4.2 and above, and connecting via USB OTG, the iRig UA is a multi-effect DSP that allows you to hook up your guitar or any other input, and parse effects on the phone directly.

If you want to see the full advertisement on IK’s site, you can view it here.

Let’s crack on with the unboxing, shall we? 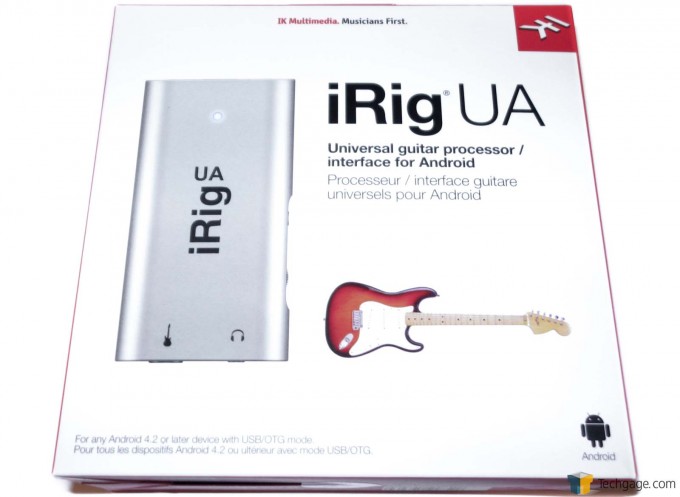 The front of the box carries an image of the UA and a guitar so you know what instrument it is aimed at along with the nomenclature of the product. Around the sides, it describes what it works with, as well as addressing the volume control for your headphones and the multicolor LED. It also features a photo of the UA and the included cable.

Inside the box is another box with a self hinged lid. Inset into the lid is the quick start guide, a pamphlet with other IK products and the registration leaflet. Under the lid lives the UA. In a smaller box (a boxception?) lies the USB cable for connecting the UA to your device. 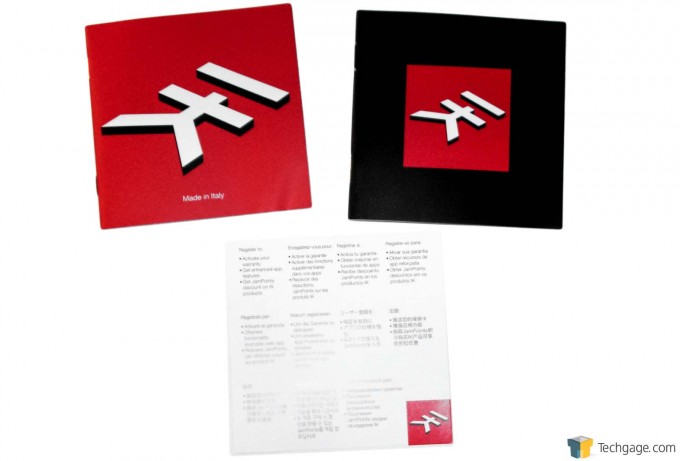 To the left is the QuickStart guide, to the right is the pamphlet and below both of those is the leaflet. On the other side of the leaflet is the serial number for registering your device along with a QR code which will bring up the registration page in your browser (with the serial info pre-filled presumably) although I registered from within AmpliTube by filling in the pertinent info manually. FYI, you have to mind the case on the letters as it IS case sensitive as I found out to my dismay when it failed the first time.

The left-hand side of the unit itself, features a legend denoting where you plug in your guitar and headphones. The USB port is on the right, and has no such legend. Also, if you look at the flat area facing the box you’ll see the thumb-wheel for the headphone volume along with the 3.5mm stereo input, to port in audio to jam with. Neither has a legend on the face of the device either. 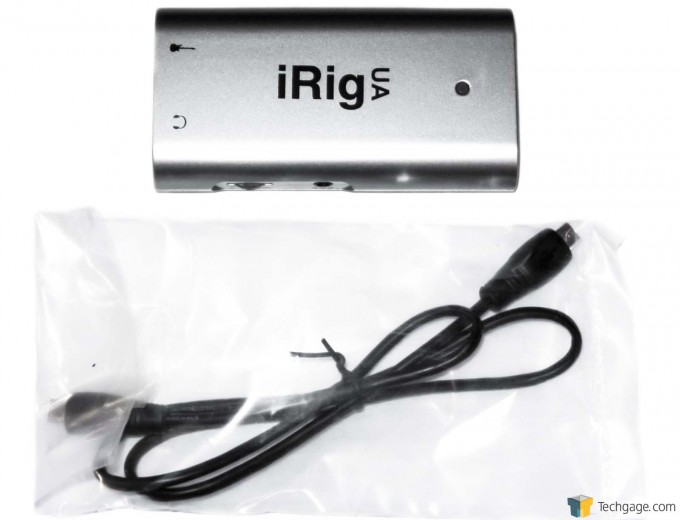 Inside the cubed box we find the USB cable in a plain nylon bag. As it’s the only thing that resides in the box the bag is a bit superfluous but I’m assuming it has its own purpose when the cables are sitting in a bin awaiting their boxception. 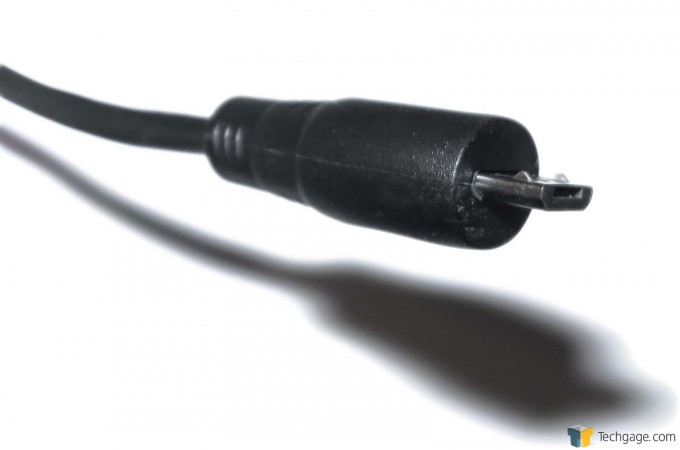 Here’s the rather unfortunate part. The cable end is a bit on the portly side. If you’re like me and you keep your phone or tablet in a case, you just might have to remove it if the opening is geared to suit a standard micro USB Type-B connector. It won’t fit through a hole designed to accommodate the thinner plug. Trust me, I tried. 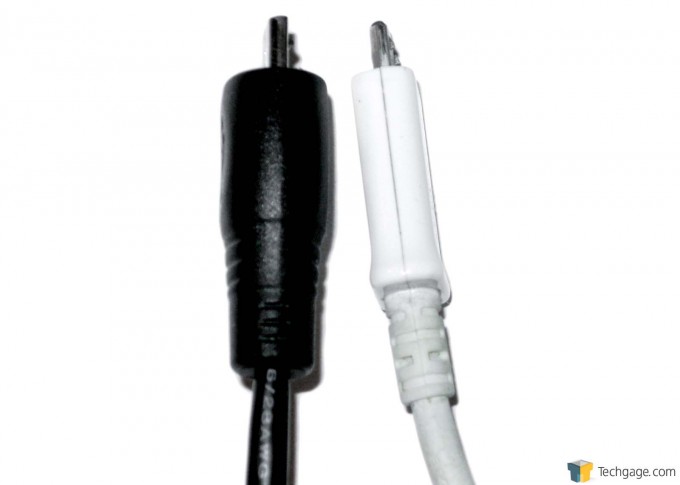 A quick comparison between a factory Samsung USB cable and the larger cable included with the UA. The suggestion I got from IK when I brought it up was to buy another cable. My suggestion for them is supply another cable. They’re called micro USB for a reason guys.

The iRig UA is reasonably small, very simple, and completely straightforward. I had hopes that the size and portability associated with it would allow me to drag my guitar to work so I could jam on my breaks. Unfortunately, I haven’t done so as of yet. Reason being that there’s no case available for the UA. My plan had been initially to use a 1M cable from the guitar to the UA, put the UA in a holster, on either a strap or my belt, along with phone.

The lack of a holster means I have to put the UA somewhere else, such as on a desktop along with the phone, and use a 2M cable. Not that big of a deal if you’ve got the space for everything, but as I work in a production environment, I really don’t have the room to spread out like that. 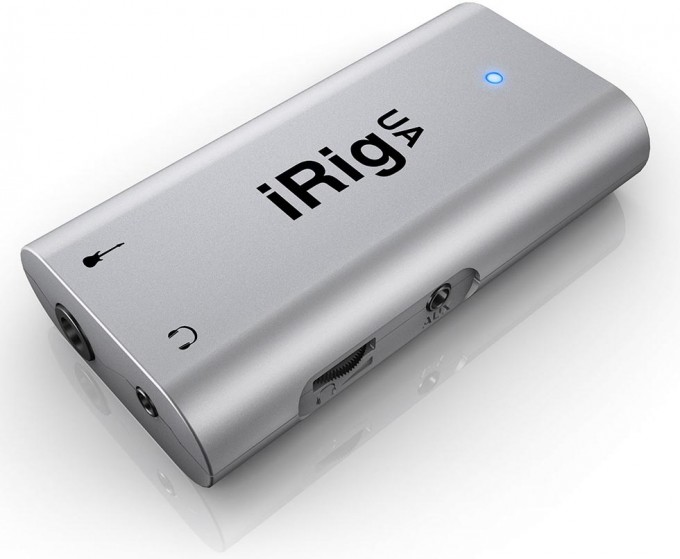 Until I can fab up a holster or work up the stomach to affix double sided velcro to the UA along with a strap, I’m just going to use it at home for the time being. That and the fact that IK recommends the use of full sized headphones over in-ear earbuds, it just ends up being more than I’m honestly willing to drag to work.  Note that this is just me. For someone working in an office environment where you have a desk and somewhere to put a pair of full sized headphones that won’t result in them getting full of detritus, rock on!

That said, let’s head into the software, with AmpliTube.

The meat and potatoes of the software is an amp sim (as the name AmpliTube would suggest), although it’s a bit more robust than that. Not only do you get to choose from a basic amp style, you also get to choose the cabinet. There’s also the option to use one of two mics.

I won’t be going through all the possible options here, but there are five cabinets, any of which are available to use with the five heads and two mics for a total of fifty possible combinations of amps, cabinets and mics alone. I believe that the choices are 1-12″, 4-10″ with tweeter (bass cabinet) 4-12″ ala Marshall, 4-12″ ala Boogie and 2-12″. 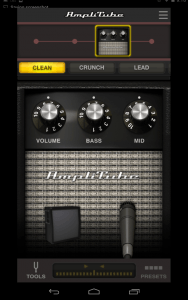 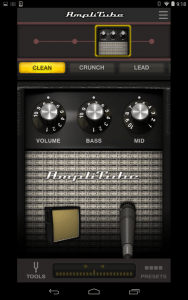 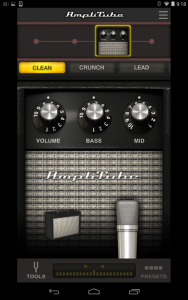 If you noticed the red dots connected via red bars above the head image, that’s the signal chain. The first slot offers a choice of distortion, octave, overdrive (TS type), wah with both a touch activated pedal option or auto-wah, noise filter and various in app purchasable effects. Note that you cannot use modulator effects first (chorus, flange, phase, etc), they live in the next slot of the chain.

If you’ve got any familiarity with the PC version of AmpliTube, you’ll find this to be a bit of a letdown as you are able to place stomp effects wherever you like. Want to run an overdrive into a distortion box? In AmpliTube on PC, totally doable, in AmpliTube UA… not so much. Modulation type effects have to reside in the second slot. Period. The third slot (after the amp), offers things like reverb and delay, although only the delay comes standard with the free version. 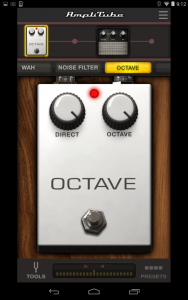 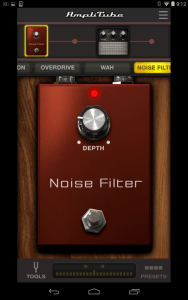 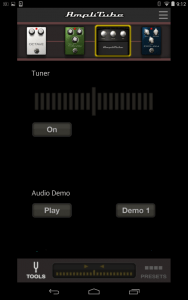 The octave pedal allows you to blend the direct and octave sounds via twin knobs. Unfortunately, you only get an octave down, no choice of an octave higher or both simultaneously. Although, when you’re dealing with the fairly limited processing power of a phone or tablet, I imagine some sacrifices have to be made along the way.

Clicking the tuning fork above tools brings up the only real tool, and that’s the tuner. Turning it on bypasses everything (in other words, you get a guitar signal straight to the headphones) until you’re in tune and you turn it off again. Although you can leave it on and go back into the main screen and have the tuner running before any effects so you can still jam through the entire rig and have tuning.

Clicking the three stripes in the upper right hand corner brings up the settings menu which is essentially the input gain. As I don’t have Android 5.0+ to test with, I’m going to assume that those with it will have an output level adjustment for using the device as an output source for other audio. Again, don’t quote me on that, it’s merely my assumption.

Now that we’ve made a brief run through of the device and the features of the software, here’s where subjectivity comes in. When it comes to sound, it’s all about how you perceive things. I really like the device; it offers a truly lag free input, at least as far as this bag of flesh can tell, a computer may be able to discern a delay from when a note is struck to when a sound is played, but I can’t. The sound is good, very good, although some of the cabinet/mic/amp combos sound a bit canned. What I mean by that is they are a bit nasal in the upper mids, almost like a speaker is literally in a can.

I don’t like that you can’t determine the order of the effects, but I appreciate the fact that it’s likely due to working in a limited environment. The software is just a fraction of the size of the PC version. Added complexity would come at a cost in terms of footprint, which would cause issues across the wide array of devices this works with. 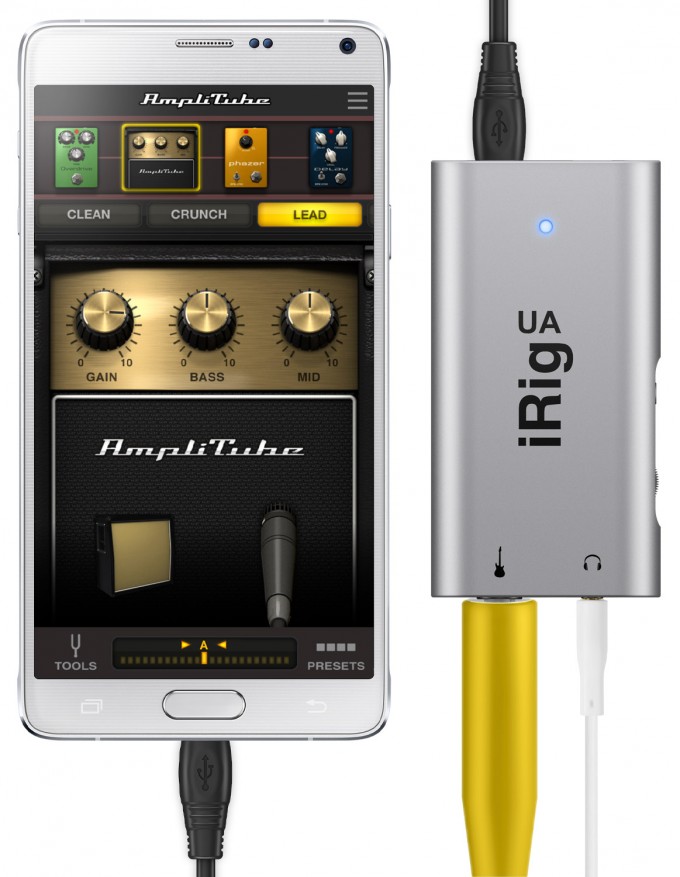 The long and short of it is, would I suggest getting it? If you’re a bedroom rocker or someone that wants to branch out to jamming away from home, without a pile of gear to drag around, I’d say absolutely. If you’re looking to produce music for recording, I’d suggest the iRig HD, which works with Android and PC via the PC version of AmpliTube. I sort of wish that the UA could work as an interface for PC via the USB port, but unfortunately it doesn’t. That said, I have read about issues with the HD failing to work with devices (Android) that it should work with, so there’s that caveat. The UA just works.

For the record, if you pony up another $70 (well, $69.95 but what’s a Nickelback worth, really?) you get the full enchilada of amps, effects and cabinets modeled after amps from Orange, Mesa and a set of Jimi’s amps from the days when a legend roamed the earth. Not a bad deal in my opinion.

Now that it’s all said and done, how does it stack up? Does it fall into must have? No, not really. It does however fall into the category of you won’t regret it. It’s definitely worth the price of admission, even with the somewhat limited nature of the software. Even if you don’t spend another dime on optional amps, cabinets or effects, you will find a usable setup. Whether you’re into blues, jazz, country, rock, metal, or anything in between.

That said I’m giving the iRig UA and AmpliTube UA pairing, the Techgage Editor’s Choice Award for bringing a very slick product to a market that desperately needs it.

You can currently pick up one of these units from Amazon for about $85. You may want to fork out for the full featured software suite if it lives up to your expectations.