Techgage posted her first article on March 1st, 2005. With most start up sites, we only had a handful of companies willing to support us from day one. Over the following years, as our credibility and popularity increased, we began to enjoy the same launch day exclusives as many of our peers in the industry. However, early on we were fortunate to have the support of companies such as Logitech, Ultra, AC Ryan and Logisys.

Of those companies, none were as interested in getting review samples in our hands than Logisys. Four out of our first ten reviews were from Logisys’ lineup, and going up through our ever-growing list of articles, we have written about 18 different products from the company.

Not known for top tier products, Logisys has made a name for itself in the PC lighting and inexpensive peripheral market. A quick query at Amazon returns 265 products for sale when searching for “Logisys” – the company certainly has a wide range of offerings for most anyone in the PC market.

While I have always liked Logisys’ products, as has Rob, this is the image that I have had of the company over the years. The folks there have chosen their niche and done extremely well in it. It’s with this attitude that I once again stopped by the Logisys booth at CES earlier this year. Hoping to find some time to catch up with the company and see how things were going, I was taken back when shown its latest chassis offering. 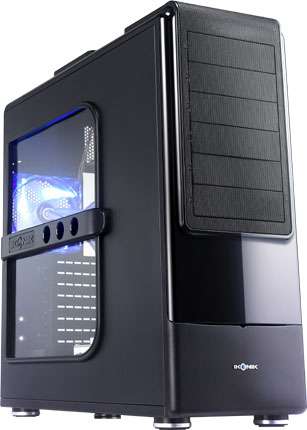 The Logisys-branded, Ikonik-made “Ra2000 Liquid” water-cooled chassis was not only huge, but rather attractive as well. In discussing the year’s new products, the company agreed to send us a sample as soon as they could. This review bears the fruits of that discussion.

Shipping with a pair of radiators, each sporting four 80mm low-profile fans, the Ra2000 Liquid has the goods to perform quite well. Add onto that a pre-built internal water loop, solid design, steel frame and removable motherboard tray, the chassis sports quite a bit to get us excited. While it has plenty to excite on paper, let’s get into the Ra2000 Liquid and see what it’s all about.

The Ra2000 Liquid is a large chassis. Standing at just under 2 feet tall, it offers six 5.25″ running down its front. Covered in a metal mesh, each of the 5.25″ bays have a cover that can easily be removed by pushing its left hand side. Behind each of the bay covers is a thin bit of foam to act as a dust filter. Below the drive bays are a pair of hidden 120mm fans. They both sit behind filters. This is a welcome theme as I continue to explore this chassis. 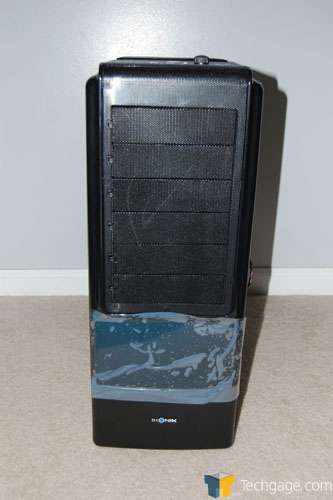 The rear of the Ra2000 Liquid offers nothing new but does allow the user to mount their power supply at the top or bottom. While each orientation offers its own strengths and weaknesses, as we get into the internals of the chassis, one might prove to be the better choice than the other. More on that later. 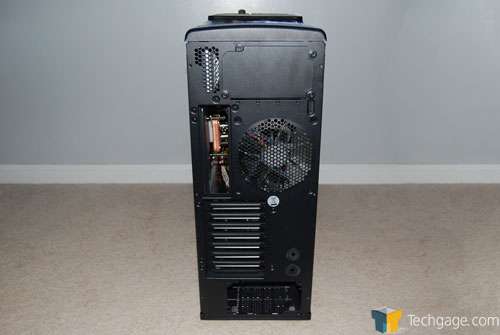 The left side of the Ra2000 Liquid has a windowed door. Shipped with thick wire mesh for a ventilated window, the case also comes with a pair of Plexiglas pieces that replaces the mesh if the user so desires. If you choose the wire mesh, you can add up to four 120mm fans to the door. There are no handles or latches – you simply line things up on the top and bottom, rotate the door closed and screw in a pair of thumb screws to hold it in place.

There is a thick plastic bar that runs the length of the window that I wish wouldn’t have been included as I feel it takes away from the overall look, but it’s not a huge deal and does allow a bit more flexibility when choosing between the mesh wiring and the clear windows. By using the plastic bar to support the windows, you can mix and match if you so choose. 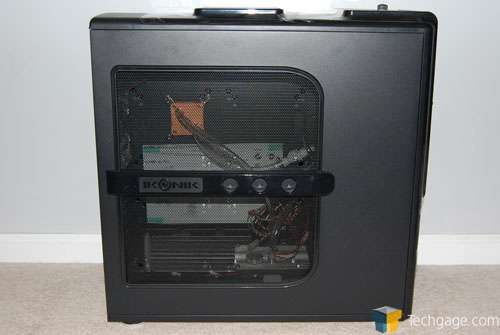 The top of the Ra2000 Liquid holds the external I/O of the case. From left to right, there is a reset button (small and slightly recessed into its housing), a hard drive activity LED, headphone and mic jacks, four USB 2.0 ports, an eSATA port, a dial that controls the speed of the top mounted 140mm fan and of course the power button. 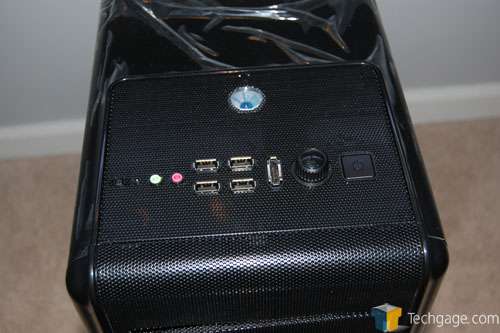 Situated behind the row if I/O is a flow indicator. It spins with the flow of liquid through your water loop. In the event that the flow is interrupted for any reason, it stops and an alarm is sounded.

Next up, the interior!