With the side panel off, we immediately see that the Ra2000 Liquid has a lot going on under the hood. The first thing that jumped out at me was the large reservoir/pump in the bottom of the case. To its right, there is room for six 3.5″ hard drives, mountable by included rails. At the top and bottom of the Ra2000 Liquid is a pair of radiators. They each have sets of four 80mm fans that sit on the outside of them. One set pulls in cool air from outside of the case while the other expels warmer air from inside. 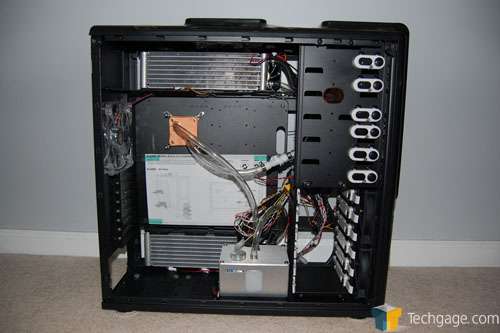 At the top of the case we get a better look at the upper mounted radiator. Just below it is the CPU water block. During transit it is mounted to the motherboard tray using the attached mounting bracket. This obviously prevents the smoother surface that touches the CPU from flopping around and getting scratched. 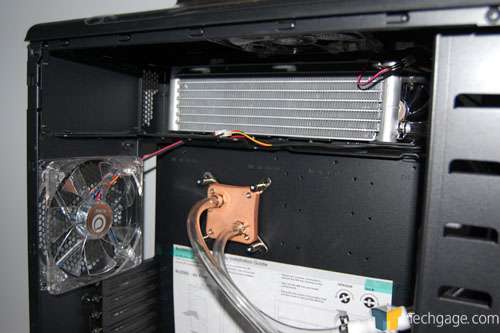 At the bottom we see the other radiator and the pump housing. This also doubles as the reservoir. With a large fill cap on its top, a level window on the side and the input and output hoses coming out the top, the entire piece is a bit on the large side but nothing that would inhibit the installation of a power supply at the bottom of the chassis. Coming out the back of the reservoir is a small group of wires. This runs to the SIM board. SIM stands for System Intelligent Management – but more on that in a bit. 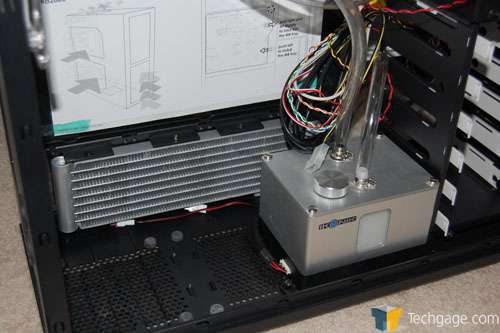 Taking a closer look at the water block, we see the post screws used to secure it into place on the motherboard tray. These are the same screws that you will use when mounting the block to a LGA 1366 CPU as well, so hold onto them. The block itself however is nothing extraordinary. The two piece copper block has studs milled out of the inside’s bottom to give the coolant that flows across them plenty of surface area to pull heat away from your CPU. 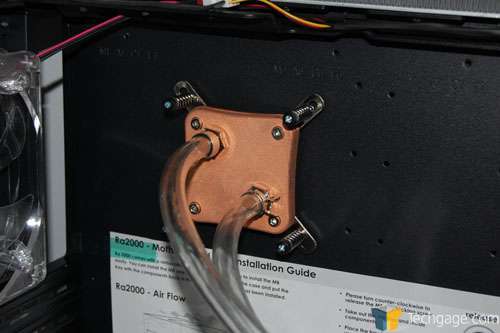 The bottom of the block is smooth and shiny but is no way lapped. There is little to no reflection that can be seen when holding an object next to the surface. While almost all water enthusiasts will cry out that this will not do, this is more than adequate for those in the market for an all-in-one water cooled computer. 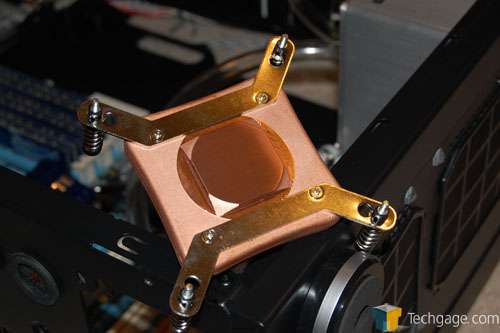 With the right panel off, we see a whole mess of kit. On the top and bottom, the eight 80mm low profile fans are visible. In the middle is the removable motherboard tray and to the left is a god-awful mess of wires, all connected to what is called the System Intelligent Management board. This board feeds power to all the fans in the Ra2000 Liquid as well as the water pump and lighting. 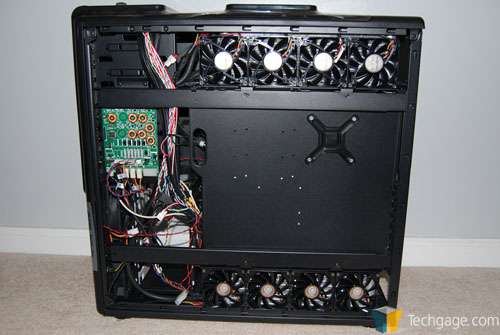 Taking a closer look at the SIM board, it’s clear that everything is exposed. All connections for fans, USB and power are located at the bottom. It should be mentioned that the Ra2000 Liquid ships with everything connected correctly. One of the headers allows for a USB cable to be joined. This is then connected to your motherboard either internally or to an open port on the back of your PC. This is how the SIM board is controlled once booted into your operating system. 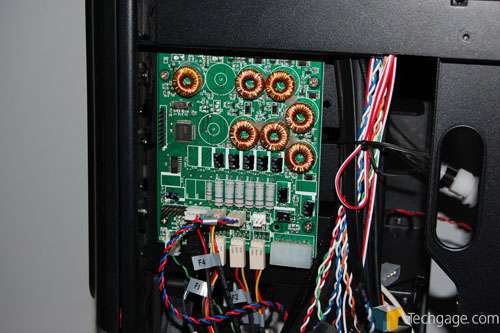 Optical drives are held in place with simple push-button locks. Put your drive in the bay and push the button to lock them in. Pull the tab behind the button to unlock. It’s really quite simple. 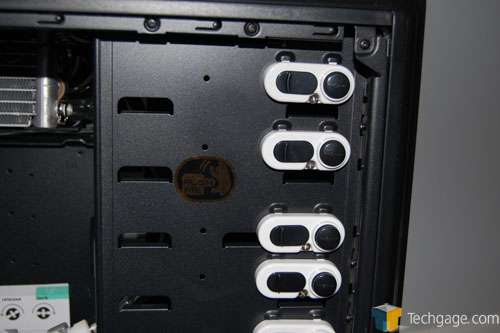 Taking a closer look at the fans attached to the radiators, we again see the 80mm low-profile fans. They sit side-by-side and run the entire length of both radiators. As mentioned earlier, the bottom set of fans pull in cool air and the top set pushes air out of the case. I would personally like to have seen both sets pull in cooler air but the way the loop is constructed, the bottom radiator feeds directly into the reservoir and then into the CPU. This means the CPU is getting the coolest water in the loop with the way things have been routed by Ikonik. 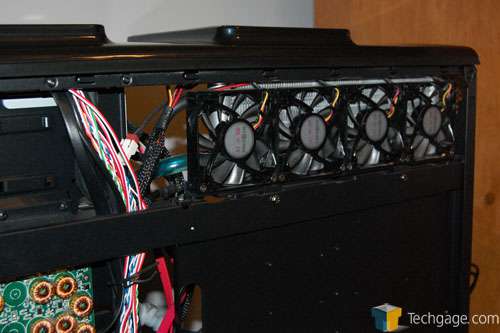 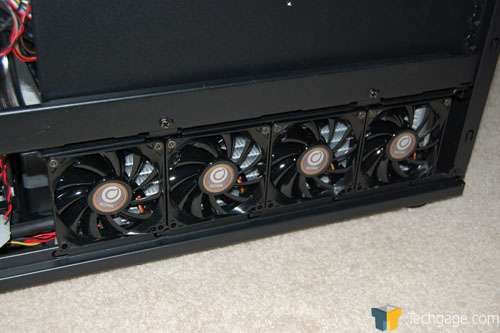 There is a pair of 120mm fans in the front of the Ra2000 Liquid that pulls in cooler outside air and pushes it across the hard drive bay. These two fans have dust filters attached to the front of them, limiting the amount of dust that can get into the case (at least through the front). They can be installed and removed without the use of tools, making cleaning them off a relative breeze. 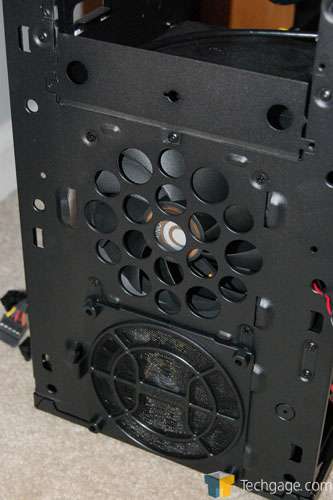 Every case includes a few extras. In the case of the Ra2000 Liquid, there is a ton of kit included in the box. As pointed out earlier in the review, the wire mesh on the side panel can be replaced with clear Plexiglas pieces. There are a pair of them and if one so chooses, they can mix and match the Plexiglas and mesh panels. To meet my own personal preferences, I went with an all-clear side. 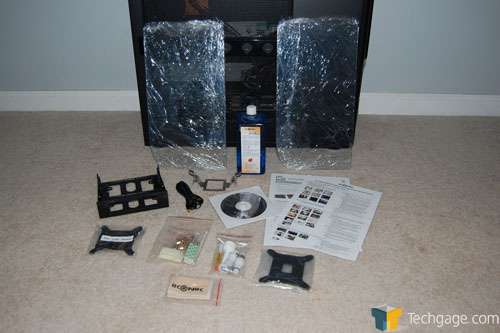 Included also are mounting plates for 1366 and AMD sockets, as well as all the screws and motherboard standoffs one could possibly need. To accompany the SIM and water loop are a pair of quick disconnects, a pour nozzle, UV reactive fluid, thermal probes and a CD containing the SIM software. Rounding out the kit is a 5.25″ to 3.5″ bay converter, a micro-fiber cloth for wiping down the Plexiglas and a few pages of instructions.