We’ve taken a look at an almost countless number of computer cases over the years, but the X-Fighter is unlike many of them in various ways. The most noticeable feature is its design, which is very sci-fi inspired. Past that, there’s been a lot of thought gone into the chassis’ cooling-ability, and that proves to be one of its nicest features.

For my testing I used a new program called OCCT 3.0. Not only does this simple program push the CPU to the brink of a meltdown through the use of LINPACK testing for Intel processors, it also turns up the juice on your GPU. It automatically maintains graphs of temperatures throughout your testing. I highly recommend you try it out on your own for your testing needs. I always run all my tests 3 times and take an average just to weed out any erroneous results. My ambient temperature is kept at a near constant 68°F (20°C) year round as my test bed PC is in my basement. There are no fans or heat vents in the area of the test platform.

I use a static overclock and settings for all my testing. Stock testing is done with all settings in the motherboards BIOS to Auto. Overclocked testing is done by turning the CPU multiplier to 11x and manually setting the Vcore to 1.275v as well as enabling line load option. This results in a processor frequency of 3.67GHz with 1.25v Vcore as reported by CPU-Z in Windows. All GPU over clocking is done using the tools in ATI’s Catalyst Control Center. Fan speeds for the GPU are bumped up slightly to 35% as well since the stock setting of 22% is just not suitable for real world use.

One thing that quickly becomes apparent is the lack of space for your hands inside while trying to get things bolted down. The VGA covering is not easily removed so it must be worked around. Also, space is definitely tight for your video card. There is room for the largest of cards, but my reference design 4870’s power connections were a little too close for comfort to the hard drive cage. 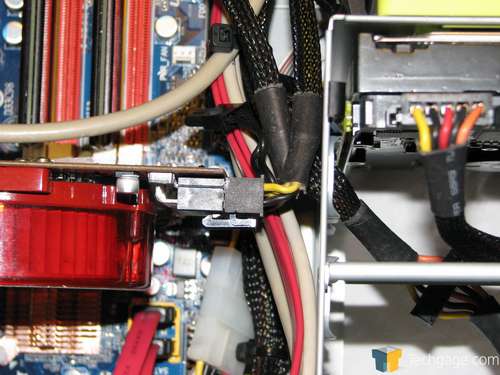 As mentioned earlier, the I/O panel’s wire location was not well thought out. My initial installation nearly pinched the wires. There is room to run them towards the side, but this also makes it more awkward to tie them down. I would definitely have preferred these to be in a different location or orientation. 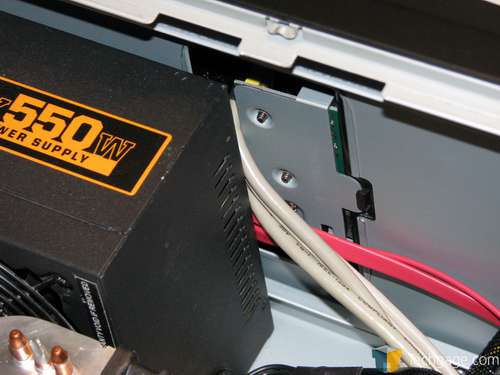 Overall the build went well. Wire routing was not too easy and there were not many places to tie things down. There were no holes anywhere to run wires through and around, either. The design inside feels dated and should be addressed in future designs/builds. 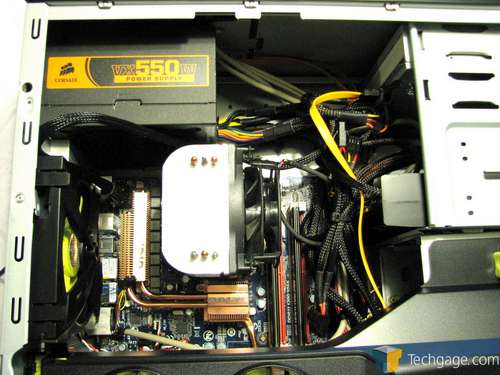 After powering up I noticed the fan noise was rather modest. I took out my trusty sound level meter and recorded an average 44db. This reading was taken while all chassis fans were running full speed. Overall I would consider the noise level to be acceptable.

Firing up stress testing programs, I recorded the following results: 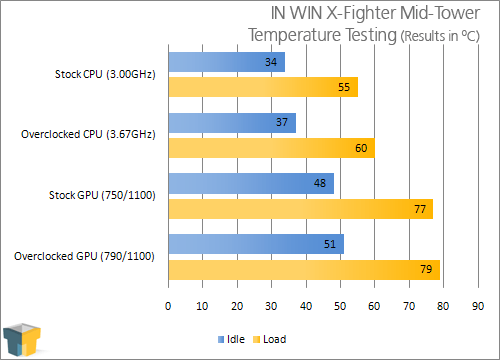 Coming it at a retail price of ~$135.99 US, the X-Fighter is amongst some strong competition. You do get some very interesting features that are not seen on most of the competition, however. The unique front panel LED lighting that strobes like KITT from Nightrider, the extra VGA cooling and the radical design cues. Overall, it is a solid package. I personally like the fact that every fan hole has an included fan to allow the best possible cooling.

The tool-less design is also very well-thought-out. The drive rails are stored in a nice caddy that fits securely inside the case for easy storage and the rubber coating performs well above average in terms of noise and vibration reduction. The PCI locks are the weak link here as it was a bit of a chore to get my video card installed, but once it was in place it was held firm and true.

I was disappointed and surprised as to the extent of sharp edges in this chassis. Almost every area where there is an exposed edge is quite sharp and one could easily get multiple deep cuts if not careful. In Win would be wise to either roll these edges in the future or to be sure that they are dulled as this is a real concern of mine.
My next area of concern was the tight confines inside during the build process. In the X-Fighter’s defense, it is a mid-tower. My main suggestion would have been to make the “VGA Turbo Cooling” easily removable as this would have made life a lot easier. I also would suggest locating the power supply to the bottom since this would shift the motherboard tray up and would allow for more access in the same footprint.

When said and done, I’m giving the X-Fighter a 7 out of 10. The price-range that it competes in contains some tried and tested fierce competitors. You do get quite a few unique features and overall I can say that it is definitely quality build. If pricing was adjusted down a touch it would definitely make this case a better buy.