Hmm, is that the doorbell? Hi, come in and sit a spell, as we take the hassle out of understanding Haswell. Will we dwell on its performance and liken it to stepping barefoot on a seashell, and bid it farewell? Or will we exalt it for packing a punch like a dropped barbell and say it is sure to outsell any other CPU as well?

That intro, ladies and gentlemen, is the reason that our look at Intel’s latest and greatest mainstream chip has taken so long. Was it worth it?

Admittedly, I could be lying, and in reality other factors could have contributed to the tardiness. I’ll let that remain a mystery, but given the fact that we are rather late on things (apologies, Intel!), let’s get right to it.

Why the name “Haswell” gives me an intense urge to begin rhyming, I’m unsure, but what I am sure of is that this is a rather interesting “Tock” release from Intel. Haswell CPUs are built-upon a 22nm process like the 3rd-gen Ivy Bridge chips were, but under the hood, Intel has retooled a lot.

Before moving on, behold, the 4th-gen Core processor: 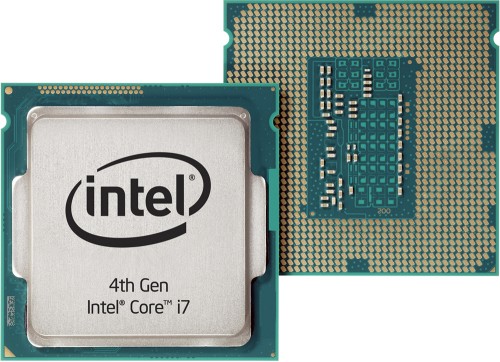 In terms of new features, it’d be difficult to call Haswell the most interesting Tock release from Intel since the company began its Tick/Tock cadence in 2006, but in terms of actual architecture design, it’s the best it’s ever released. However, it’s important to not expect major performance gains here over last-gen; effectively, if you’re already equipped with an Ivy Bridge PC, there’s no reason to upgrade unless you’re planning to move up to a larger model. It’d be ridiculous to move from a Core i7-3770K to an i7-4770K, for example. If you’re rocking an older rig, especially older than the i7-2xxx series, Haswell is worth looking into.

Those hoping to get a reprieve from the socket roulette game that Intel plays with any new architecture release haven’t been thrown a bone with Haswell. Despite the similar size, Intel has adopted a new LGA1150 socket for use with Haswell. While that sucks for those who own LGA1155 and were hoping to upgrade, the change is for a legitimate reason: there have been a ton of power-related changes made here, so it simply wasn’t possible to retain last-gen’s socket.

Intel’s current Core i5 and i7 lineup:

Outside of IGPs and TDPs, the trio of i7-4770 models are spec’d identically to their i7-3770 predecessors. Interestingly, despite the power-related overhauling Intel has done with Haswell, the K and non-K models are spec’d 7W higher. We’d assume that it’s the IGP upgrade that has caused this boost; as we’ll see later, both the i7-3770K and i7-4770K deliver about the same overall load in our tests (with the IGP out of the picture).

Intel might have made an awful lot of changes to the Haswell architecture over Ivy Bridge, but the general function layout remains identical:

As with the previous couple of generations, Intel packs graphics, a memory controller and PCIe lanes into the CPU, which negates the need for an entirely separate chip on the motherboard. The biggest 4th-gen Core models include 8MB of L3 cache, while the middle-of-the-road i5’s include 6MB (i3’s include 4MB; Pentiums, 3MB).

Regarding efficiency, there are a handful of reasons why Haswell is Intel’s best-ever architecture. As seen in the diagram below, the Unified Reservation Station (task scheduling) has had two ports added; one to improve integer performance, the other for improved store address calculation. In addition, the L2 TLB has been increased in size, and wide vector units have had their bandwidth doubled. Virtualization latencies have been reduced as well. 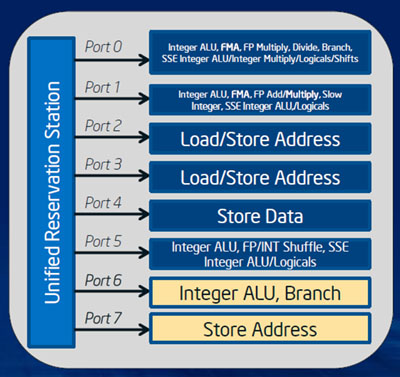 The overarching goal with these improvements is to increase the overall operation-per-clock cycle – ideally, that should be double what it was on Sandy Bridge for some operations.

A new CPU isn’t a new CPU without a new instruction set or two, and Haswell has got us covered. AVX2 has been added to the mix, which enables support for 256-bit integer vectors, and FMA3 (fused multiply-add) support has also been added. Any media-related workload that supports either of these two instructions should see a great performance improvement.

General performance improvements haven’t been a major focal-point of Intel’s for a while, as it aims to get its processors into every device imaginable, from servers to smartphones. Thus, Haswell’s power system has been overhauled to keep power usage low at home, and battery-life long while on the go. 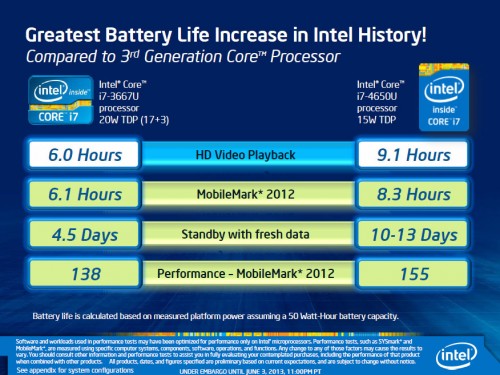 The bulk of the power improvements have FIVR to thank, or Fully Integrated Voltage Regulator. As its name suggests, this is a voltage regulator built right into the CPU – a rather significant change. With a VRM built-in, efficiency is of course improved, with Intel gaining even finer control on how power is distributed throughout the chip.

The greatest advantage to these changes, and the addition of two new power states, is mobile. Intel claims that Haswell has delivered the greatest increase in battery-life it’s ever accomplished from one generation to the next. In some cases, battery-life could be improved by as much as 50% when in use, and 250% longer when in standby. Clearly, these are some noteworthy gains.

You can’t have a brand-new CPU architecture without brand-new chipsets, so to fill the void is Z87, H87, H81, Q87, Q85 and *catches breath* B85. The contents of the flagship Z87 chipset can be seen in this diagram: 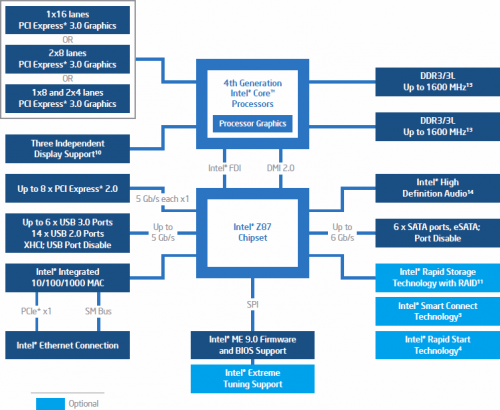 With Haswell, Intel continues to let Sandy Bridge-E (2nd-gen Core) have the exclusive benefit of being able to offer 2x x16 PCIe lanes when using two graphics cards in SLI or CrossFire. Admittedly, this is going to potentially affect only the highest-end of graphics configurations – unless you’re running a $1,000+ configuration, you’re likely safe. PCIe 3.0 offers a ton of bandwidth, after all.

In addition to those PCIe lanes driven by the CPU, the Z87 chipset adds support for 8x x1. Other functionality includes 6x USB 3.0, 14x USB 2.0, Gigabit Ethernet, Intel Audio and support for up to DDR3-1600 (faster RAM can of course be used).

As has become somewhat of an unfortunate trend, Intel differentiates its CPU lineup in ways that are very easy to overlook. You’d imagine, for example, that the highest-end Core i7-4770K wouldn’t lack a single feature – but it does. As seen in the CPU comparison below (taken from Intel Ark), we can see it lacks vPro Technology, VT-d (an I/O virtualization accelerator) and also TSX-NI support – aka: transactional memory. 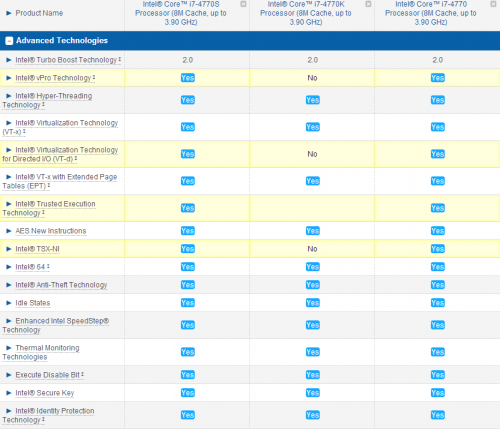 According to Intel, the reason the K models lack some of these features is because that’s not their target audience. You’d also imagine, though, that a lot of people purchasing a non-K or non-S wouldn’t have much interest in something like VT-d, so it seems likely that there’s more at play here.

If I had to wager a bet, I think it’s because the K is an unlocked chip, and Intel might prefer enterprise customers purchase their higher-end Xeon offerings rather than buy an inexpensive chip and just overclock it (and obviously, it’s not hard to overclock an Intel CPU to bring it from one tier to the next). The fortunate thing in all of this is that those lacking features are going to affect a small number of people, but you could be one of them, so it’s worth noting.

I think it’s safe to say that overall, Intel brings a lot to the table with Haswell. Performance aside, it’s simply an impressive architecture to behold, with a large number of benefits for all-around computing. As enthusiasts, though, we tend to care about performance gains even if they’re not supposed to be huge. So with that, let’s take a quick look at our test system and methodology, and then get right into our benchmark results.