To help consumers understand what sort of power will be sucked from the wall thanks to their CPU, companies like AMD and Intel give us a “TDP” rating, which is in effect the realistic top-end wattage the CPU will hit. CPUs can sometimes go above these wattages, but that’s typically only when tools are used to specifically stress-test the processor.

To help keep our CPU at 100% load during a realistic scenario, we make use of our CyberLink MediaExpresso benchmark; specifically, the CPU Only + Best Quality configuration. But please note: the load results below are just that, (max) “load”. Most often (or never, depending on your usage), your CPU is not going to be at full load, making this a worst case scenario. Also, different motherboards can introduce a variance of up to 10 watts, so there’s no true apples-to-apples comparison unless more than one CPU is benchmarked on the same platform.

Our methodology here is simple: boot the machine up, let it sit idle for 10 minutes, capture the idle wattage, and then begin the benchmark. Because the encode stresses the CPU 100% throughout most of the encode, we only monitor the last couple of minutes’ worth. 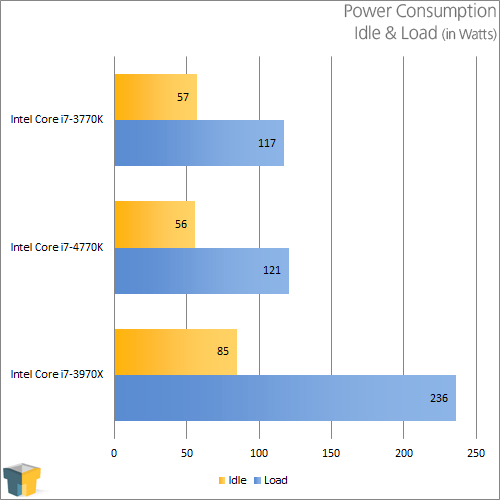 Well, one of these CPUs is much hungrier than the others. Both the 3770K and 4770K level out, although we might have seen Intel’s latest get the nod if not for the fact that we had to use different motherboards for each build. If only Intel could stick to a single socket for more than one generation!

At this article’s outset, we established all of what makes Intel’s Haswell architecture so noteworthy. We always expect performance to be improved from one architecture to the next, and of course, we expect the same for power-efficiency. Here, though, Intel has retooled a lot in the quest for the ultimate of both worlds. As we’ve been able to see throughout all of our testing, it’s succeeded. Our power results above are an exception, but it’d take a notebook to prove the enhancements there to us, given that’s where power consumption is really important.

Power stuffs aside, Haswell isn’t going to be a “must-have” architecture for those who rock a PC a generation or two old. The reason to upgrade in that particular case might be to get the most feature-rich motherboards the planet has ever seen, and support for things like PCIe 3.0 and improved SATA 3.0 / USB 3.0 performance. Over Ivy Bridge, Intel estimates users will see a 5~10% performance increase. GPU-wise (IGP), that figure can jump to 2x. Battery-life? +50% for most workloads. 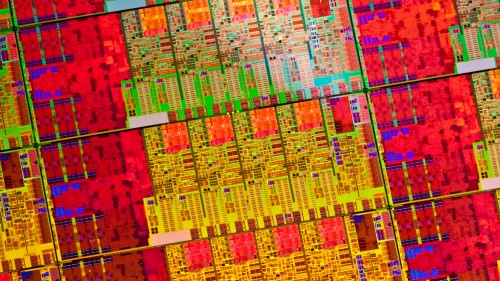 Close-up of a Haswell wafer

One area we didn’t tackle in this article is the IGP – or at least not to the degree I’d like to. In the future, I’d like to test Intel’s latest against AMD’s, and see where things really stack-up overall. We did get some non-gaming testing in, however, thanks to PCMark 8 and MediaExpresso. With PCMark, we found that Intel’s IGP accelerated Adobe’s suite of products better than NVIDIA’s GeForce (something we didn’t expect), and when using QuickSync, media encodes happen faaaaaaaast.

To sum-up, Intel’s Haswell is a great architecture for a number of reasons, and for those building a new system, it’s an ideal choice for the ultimate in performance and efficiency. Its performance improvements over Ivy Bridge don’t warrant even a minor consideration of an upgrade, but for those with older platforms, Haswell is well-worth considering.