To help consumers understand what sort of power their CPU will draw from the wall, companies like AMD and Intel give us a “TDP” rating, which is in effect the realistic top-end wattage the CPU will hit. CPUs can sometimes go above these wattages, but that’s typically only when tools are used to specifically stress-test the processor.

To help keep our CPU at 100% load during a realistic scenario, we make use of our CyberLink MediaExpresso benchmark; specifically, the CPU Only + Best Quality configuration. But please note: the load results below are just that, (max) “load”. Most often (or never, depending on your usage), your CPU is not going to be at full load, making this a worst case scenario. Also, different motherboards can introduce a variance of up to 10 watts, so there’s no true apples-to-apples comparison unless more than one CPU is benchmarked on the same platform.

Our methodology here is simple: boot the machine up, let it sit idle for 10 minutes, capture the idle wattage, and then begin the benchmark. Because the encode stresses the CPU 100% throughout most of the encode, we only monitor the last couple of minutes’ worth. 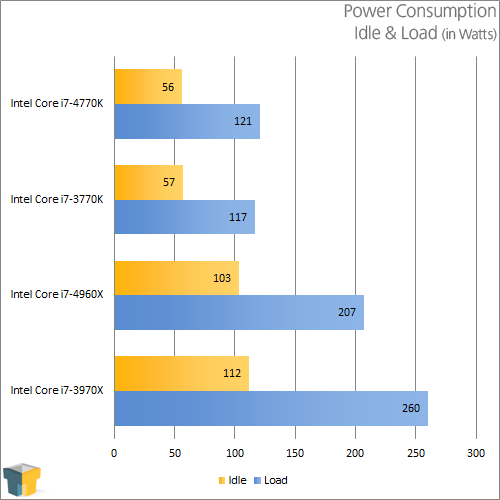 We might not have seen major performance improvements with IV-E over SB-E, but power consumption wise, some nice improvements can be seen. Alright – awesome improvements. A drop of 53W at full-load? That’s what I’m talking about.

Intel’s Core i7-4960X (and Ivy Bridge-E in general) is easy to sum-up, but not for the greatest of reasons. I’d love to be able to write that IV-E is a major improvement over SB-E, but it isn’t. I’d like to say that it dominates the Haswell-based Core i7-4770K, but it doesn’t. While there are clear improvements in certain scenarios, they’re mostly confined to video and 3D rendering. In most other regards, the architectures in both the 4770K and 3770K prove to be superior to IV-E.

As an “enthusiast” platform, IV-E does offer a couple of important perks: quad-channel memory, and more robust PCIe possibilities. For the latter perk alone, X79 + IV-E, despite falling short in the performance department a lot of the time, is going to be the best choice for those planning to build higher-end multi-GPU setups. You’re sure to be fine with mainstream cards in SLI, but with cards like the GTX 770 or higher, the extra PCIe lanes could be beneficial. This is especially true with 3-way or 4-way – X79 is an absolute no-brainer here. Running 3 GPUs at x16 each is going to be hugely preferable to running them at x8 / x8 / x4, which would be the configuration on Z87.

And again – for those with insatiable memory bandwidth needs, X79 again can’t be beat. For some, 45GB/s @ DDR3-2133 is going to be an important gain over 25GB/s on Z87 at the same speeds. Admittedly, I am not quite sure of a scenario that will make use of this extra bandwidth, but those that do are sure to be on the workstation / server side. 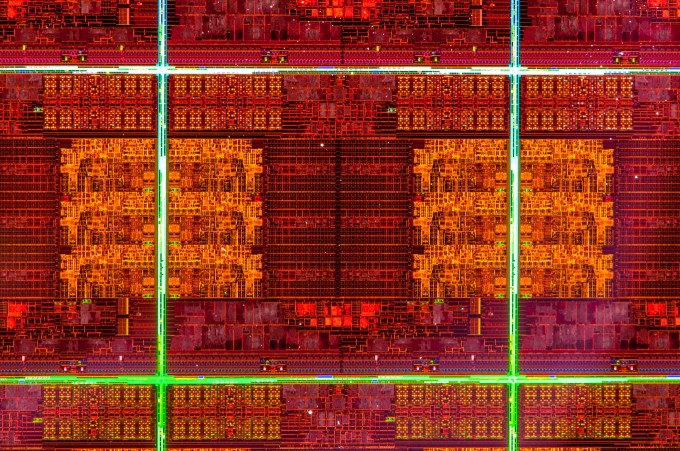 Had Intel released the i7-4960X as an eight-core / sixteen-thread part as I would have predicted two-years-ago, this review would have been a lot more positive. The IPC (instructions-per-clock) issues wouldn’t have been fixed, of course, so a CPU like the i7-4770K would have still come out ahead in single-thread tests. But with a literal doubling of the cores, the CPU would have handily dominated most tests, whereas here, the 4770K matches or beats it more often than not.

IV-E’s design supports 8 cores, as SB-E did. So what’s the reason Intel didn’t go that route? The answer is likely two-fold: At 130W, adding two additional cores would have likely pushed the CPU above 150W at the frequencies Intel would have wanted to offer it at. At six-cores, these processors run hot enough, and while eight-core Xeon chips exist, none of them run at speeds like this 4960X does.

Thanks to these issues, Intel might have had wanted to release a lower-clocked eight-core part instead – but how attractive would that have looked? Not very, I’m afraid. In that case, we’d be crippling single-threaded performance to gain in multi-threaded performance, but few of Intel’s target audience for IV-E is going to be running strenuous workloads all-too-often.

Then there’s the even more important fact: Had Intel released an 8-core desktop part, companies in the enterprise might purchase those instead of the pricier Xeon parts. Intel of course doesn’t want that. So this means that the desktop folk might be able to pick up an Intel 8-core part as soon as 10+ core CPUs become common on the Xeon side. This is the same sort of reason that Intel drops certain virtualization technologies off of its unlocked desktop parts, such as the 4770K. Intel makes mad bank off of its Xeon product-line, so it’s not going to want to risk that by releasing an overly impressive desktop part, as unfortunate as that is.

It stands to reason, then, that the i7-4960X shouldn’t be priced as it is, but alas, I don’t think Intel could imagine foregoing its $1,000 part, and because it does include more cache, it’s going to be attractive to those planning to take full advantage of what the processor offers.

Summing-up, IV-E is worth going with if you are building a truly high-end or workstation rig; for everyone else, you’re probably better-off building a much more affordable Z87 rig instead.

If it were Haswell-E we were reviewing here, the outcome would have been far different.