For the sake of all-around testing, we perform most of our benchmarking on this page with the help of SPEC’s SPECapc 3ds Max 2011 and SPECapc Maya 2012, although we also render an in-depth model/scene in the former. We’ll explain each benchmark as we go along.

Designed to utilize both the CPU and GPU, SPECapc 3ds Max 2011 comes in both free and professional flavors, with the latter being the version we use. It’s composed of 58 individual tests and takes about 6 hours to complete on a machine equipped with 12GB of RAM and a six-core Intel Core i7-990X. 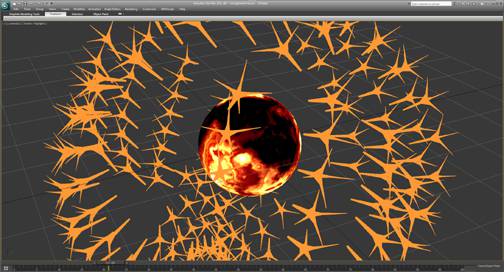 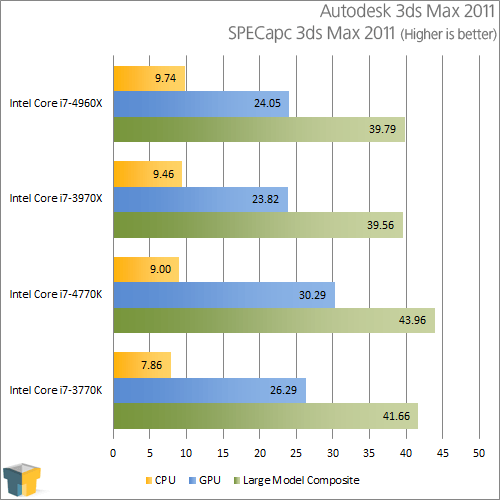 On the CPU front, the i7-4960X outperformed the i7-3970X by 3% – the other results are just about similar. While the Haswell-based i7-4770K fell behind in the CPU test – as expected – it performed much better in the GPU and large model composite test, versus the 4960X.

For our second 3ds Max 2011 test, we render a scene commissioned from Bulgarian artist Nikola Bechev, entitled “Naomi: The Black Pearl”. The woman is composed of over 7,000 polys with the entire scene totaling just over 106,000 vertices. Three light sources are used, with the entire scene being enhanced with HDR and ray tracing techniques, and subsurface scattering applied to certain objects. The scene is rendered at 1800×3600 as a production release, with HQ detail levels being used all-around. 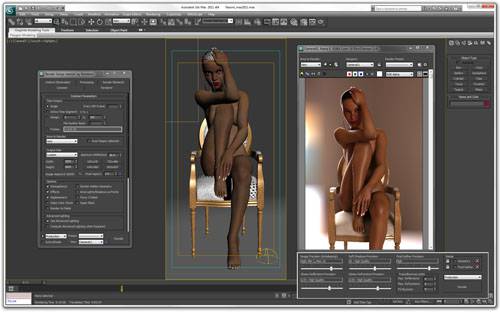 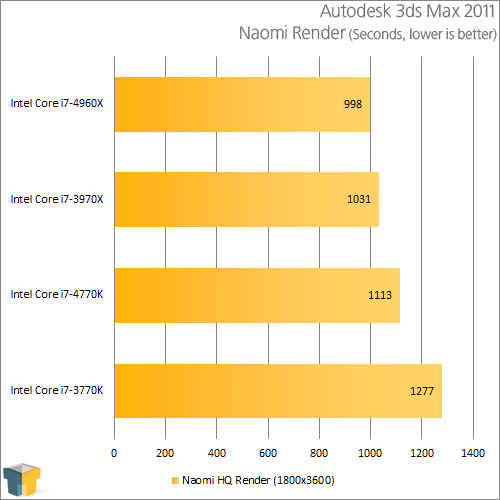 3D rendering tests like these were just made for CPUs with lots of cores, and that’s proven here. The quad-core i7-4770K fell behind the i7-4960X, but it must be said that a 12% gap between the two makes the Haswell architecture look all the more impressive.

Like its 3ds Max 2011 variant, SPECapc Maya 2012 is designed to stress various aspects of the tool, such as rendering with standard and HQ methods, working in wireframe mode and so forth across numerous models and one overarching scene titled “Toy Store”. 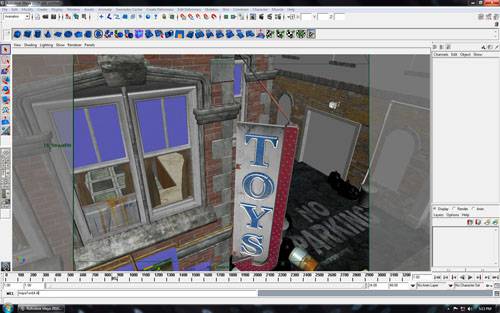 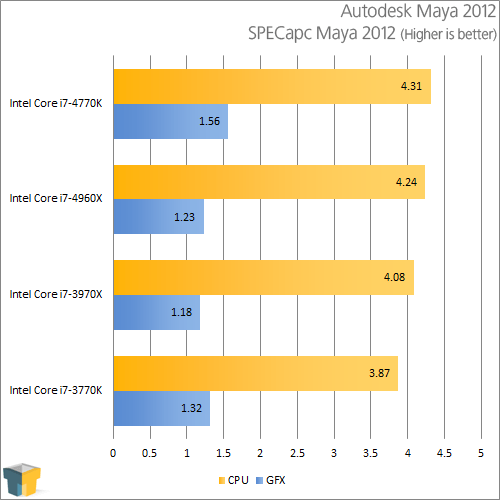 Haswell’s IPC performance was highlighted in our last test, but it really shines here, outperforming a CPU with 50% additional cores. Despite Intel’s claim of improved GPU performance on IV-E, it seems that it doesn’t affect a test like this one – the i7-4770K simply dominates.