by Rob Williams on November 10, 2019 in Processors

With competition in the CPU market proving to be fiercer than ever, Intel has decided to haul out some big guns. “Big guns” in this case refers to eight cores running at 5GHz a piece. This comes to us in the form of the Core i9-9900KS, and you can join us as we pit it against the rest of our collection in creator and gaming workloads.

Ahead of the upcoming launch of Intel’s next Core X-series HEDT processors, the company’s delivering what it believes is the best gaming CPU in the world. The company had similar messaging when it unveiled the Core i9-9900K last year, so what exactly does the 9900KS deliver that’s so special? Guaranteed clocks of 5GHz on all eight cores, that’s what (versus up to two cores on the 9900K).

Intel is targeting this chip largely at high-end gamers, but it’s also an alluring choice for the creator who doesn’t necessarily need a many-core CPU like those from the Core X lineup. If you run workloads that are generally GPU-heavy, then a fast eight-core CPU is going to serve you well. If the software you work with is hugely multi-threaded (for encoding, rendering), then the enthusiast platforms are going to be a better bet, despite the lower clocks. 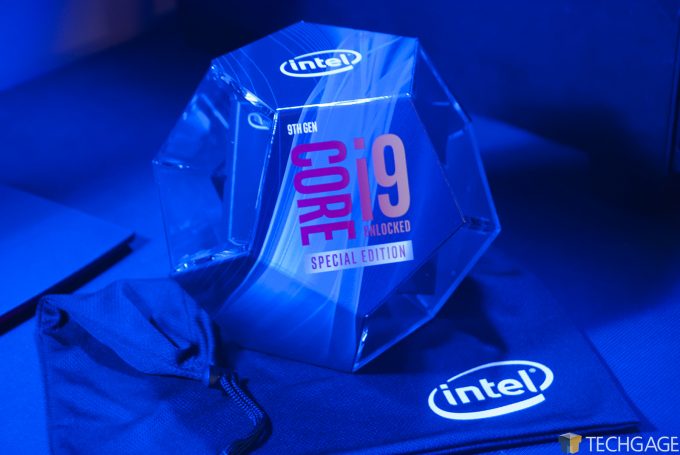 In 2017, Intel introduced the six-core Core i7-8700K, and for the time, it was an absolute screamer. With its ability to hit 4.7GHz on a couple of cores, the chip seemed pretty impressive overall – at least until the Core i9-9900K came out. That one added two cores and four threads, and an all-core Turbo of 4.7GHz. With KS, Intel kicks things up a notch to deliver 5GHz on all eight cores. You could say that this chip is fast.

Here’s a quick run-down of the 9900KS and how it stacks up with the rest of Intel’s lineup:

At quick glance, we can see the only major difference between the 9900K and KS is that the top dog is spec’d at 127W, 32W higher than the 9900K. Everything else remains in tact, so we’re dealing with the same amount of cache and identical feature sets.

It’s important to note, though, that this chip doesn’t seem like it could be around for too long, partly thanks to the fact that it’s got to be really difficult to produce a chip that can guarantee these kinds of clocks. If it were easier, we probably would have seen the original 9900K sport the 5GHz all-core Turbo. What this ultimately means is that if you want a 9900KS, you shouldn’t waste too much time on picking one up. 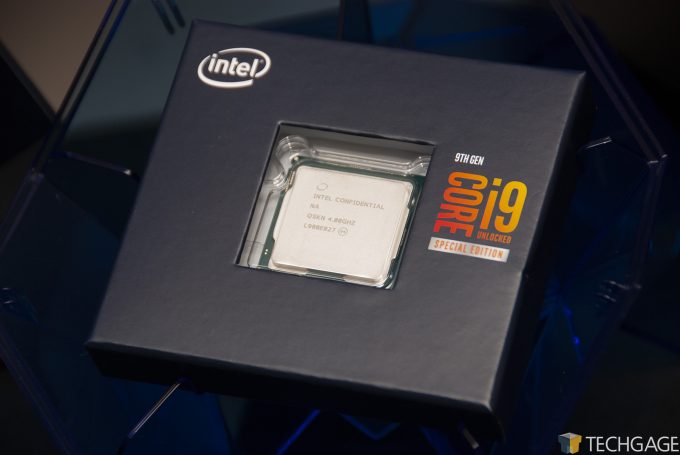 At the moment, the chip seems to be easily found at Amazon for around $525, as of the time of writing. By contrast, the original 9900K has dropped in price in some places; it can be found for $472 right now. With a price difference like that, the 9900KS is going to be alluring to most – because if you are already spending upwards of $500, what’s a little extra to guarantee the top-end clocks?

Everything being said, the original 9900K required a good cooling solution to keep temperatures under control, and even today, with our dual-rad Corsair H100i v2 setup, the 9900KS gets hotter than we’d like to see (~90°C). Fortunately, we couldn’t see any degradation in performance due to temperatures in our testing, so our Corsair AIO continues to serve its purpose – but we’d feel even better with a triple-rad cooler.

Before jumping into performance, there are a couple of quick things to cover. Since we last published a CPU review, we re-tested AMD’s Ryzen 9 3900X and the i9-9900K using the latest EFIs and chipset drivers, and while it’s nice to have fresh numbers, there were minuscule differences in the end.

Also, as a bit of a preview, this is the last review using the current iteration of our test suite, with the next one coming soon (the 9900KS is already in the process of being tested with these updates). A couple of our tests were updated, while some were overhauled. Some applications were also updated to their latest major version, like Adobe Premiere Pro and Dimension, as well as KeyShot, Cinema 4D, and Corona. Two other additions managed to make it into this article because of special testing done not too long ago – Adobe Lightroom Classic, and Blackmagic RAW Speed Test.

Without further ado, let’s tackle test methods on the next page, or start with performance on page three.