Page 3 – A Look At The Software, Final Thoughts

As time has gone on, the “software” component of system reviews seems to get smaller and smaller, because nowadays, many companies have seemed to catch on that users prefer to have clean desktops, sans bloatware. Our NUC followed that philosophy to the point where it’s pointless to include a desktop screenshot, as we all know what a factory fresh Windows 10 looks like.

Some vendors include at least one software component for managing settings or monitoring temperatures, but there’s no such thing here. That can be considered either a good or bad thing based on your preferences, but because there’s not much to really “control” on the hardware front, there isn’t a huge a need for Windows software.

It is worth taking a look at the EFI, however:

Given that this NUC effectively sports similar hardware found in notebooks, we expected the EFI options to be limited. That really couldn’t be further from the truth, as there’s a bit of everything to tweak for power users. You even have limited fan control by way of telling it when to shut the fan off if temperatures go low enough (the default is 50°C).

It seems to be a bit of a trend that motherboards will ship with virtualization support turned off, but Intel has it fully enabled from the get-go here, which is great to see. As mentioned on the previous page, this NUC handles virtual machines really well, something definitely helped by the CPU’s fast clock speeds.

In a final test before wrapping up our testing, we reinstalled Windows 10 fresh to the NUC, to see if any oddity would creep up after we hit a fresh desktop. Fortunately, none did. Windows detected all of the hardware just fine, as Device Manager had no complaints about missing drivers.

When NUCs first hit the scene, it was hard to predict exactly where the series would go, but overall, we’re really glad to see that it’s evolved as it has. From the start, Intel focused on ease-of-use, and with a really small AIO PC that sits neatly next to a monitor, there’s a lot to like. We often hear of businesses that have implemented NUCs, and when we had the chance to visit with some Formula 1 teams a couple of years ago, we were (only sort of) surprised that fleets of NUCs could be seen in the garages.

The great thing is that NUC isn’t only one thing. Intel didn’t stranglehold itself by trying to make sure NUCs were only pint-sized. Even though this Quartz Canyon NUC is much larger than most others, it brings a ton of performance to the table, and offers upgrade paths for both the Compute Element itself, and the graphics card. 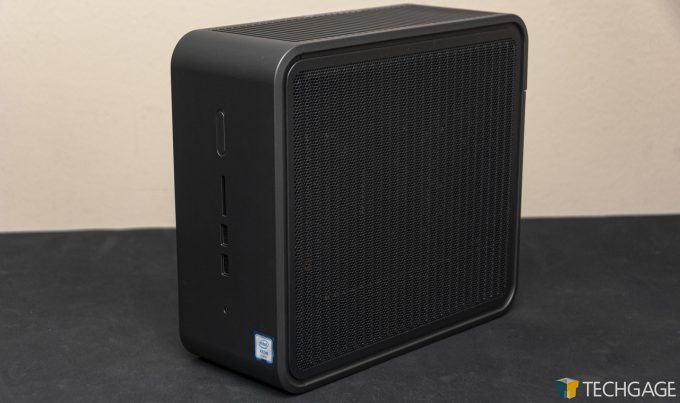 It’s worth pointing out again that this Quartz Canyon NUC is not the only potential design. Should system builders want to get in on this platform, they can integrate Compute Elements into their own designs, such as the Razer Tomahawk we mentioned on the first page (although that uses the Ghost Canyon variant).

The truth of the matter is, unless Intel makes major strides in being able to pack more cores into such a small form-factor, it’s going to be the GPU that will be in most need of upgrading over time. As we covered before, it’s really unfortunate that the highest-end Quadro to fit in this NUC is a three-year-old option that was destined for the low-end part of the market from its introduction. We’d love to see a Quadro RTX 4000-equivalent fit in here, so we can cross our fingers that more options will come in time.

It could be that in time, we’ll start recommending Intel’s own graphics cards for a solution like this, as the company is hugely focused right now on developing powerful discrete options. Those are still a ways off, however, and when they do drop, they will almost certainly be tailored to the datacenter before our lowly desktops. As for AMD, its highest-end workstation solutions that fit in here is still lower-end than even this low-end NVIDIA Quadro. 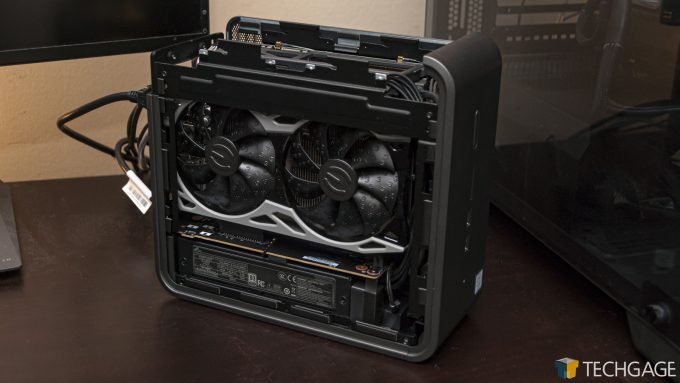 It’s for that reason that we’d suggest most adopters of this platform to opt for a GeForce RTX 2060 or RTX 2070. The exception is where CAD use is concerned. If you use an CAD suite like SolidWorks or CATIA, which are hugely tuned towards workstation hardware, you’ll want to opt for Quadro. There are cases where even the lowbie P2200 outperformed our gaming card, simply because NVIDIA has fully unlocked and optimized performance on Quadro in these suites.

Because of the heat factor, we wouldn’t suggest using the Xeon CPU for rendering, unless you keep to a modest GPU. Nowadays, rendering is hugely sped-up with GPUs, and especially so with NVIDIA’s ray tracing acceleration. Any heavy 3D content in general would also run far better on a GeForce like the one we tested, over the small Quadro P2200.

Ultimately, this is not a platform for everyone, and its higher price-point ensures that. This is an optimized platform that’s designed to be supremely stable, and still allow some upgrade paths. For the enterprise and work environment in general, the vPro features of our NUC 9 Pro in particular will be useful, as will be the error correction memory. If you don’t need vPro but still like this platform, you can also consider the NUC 9 Extreme, which has options as low as the quad-core Core i5-9300H.

This kit is a bit expensive to jump into, but we’re left impressed with the overall package. We found ourselves surprised on multiple occasions by how easy it is to work with this machine, even when needing to tear out the entire Compute Element. Working with small form-factor PCs can sometimes be arduous, but not here. The biggest downsides this platform has are outside of its control – namely with regards to not being able to fit a high-end workstation GPU in here.

As always, if you have any question unanswered, please leave us a comment!

Page List
Top
1. Introduction, A Look At The Hardware
2. CPU & GPU Performance, Temperature & Power Testing
3. A Look At The Software, Final Thoughts
<< Back