The new processors don’t have a hard launch date yet, but will be launched later this summer. Therefore, this is more of a performance preview than a review, but it will show you what to expect should you purchase one at launch. Before we move on, here is a table to better help you understand the entire Conroe line-up, including these new offerings. Just bear in mind that once this refreshed line-up hits the market, some other models may be phased out.

As mentioned in the intro, the new releases retain the same TDP as the previous releases. When the CPU voltage was set to “Auto”, the actual voltage used was 1.344v. The CPU is able to run with less voltage, and we will tackle that more in our overclocking section. 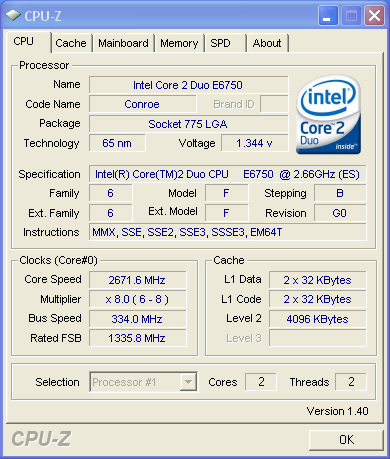 Most of the 1333FSB reviews you see around the web today will be of the E6750 for the fact that it is likely to be the most desired pick of the new line-up. The E6850 costs about $80 more for a 340MHz boost, something that can be accomplished with this CPU without even increasing the voltage. However, for CPU overclocks of 4.0GHz and higher, the E6850 will be the preferred chip for the 9x multiplier. The E6750 has a 6 – 8 multiplier, meaning that your motherboard will need to handle a 500FSB to hit 4.0GHz… a tough task.

We’ve covered all the basics, so let’s compare this new CPU to our E6600 and Q6600 processors on hand.