Throughout all of our benchmarking tests, regardless of what we are reviewing, testing is done in a clean and stand-alone version of Windows XP Professional with SP2. The exception is in our SYSmark 2007 tests, which uses Windows Vista Ultimate. No Windows Updates are applied for the sake of time, unless one is required for a piece of hardware on the computer.

We’ve recently updated our methodology, to reflect a more real-world experience. Instead of tweaking Windows to a minimalist state, we leave all initial processes running, as it is a realistic scenario. The primary form of computer latency is a network, so all network devices are disabled prior to any testing. This is done in addition to:

Games that are used for benchmarking have their average frames per second recorded with the help of FRAPS 2.82. Here is the specs of the machine used for todays testing:

The refreshed line-up is consists of mere speed bumps, so this preview will not be as long as it would be if it were a complete architecture change. Also, throughout our testing we are comparing only three CPU’s since that’s all we have on hand. The Q6600 is a Quad-Core processor so it will no doubt beat the other two in almost every test. 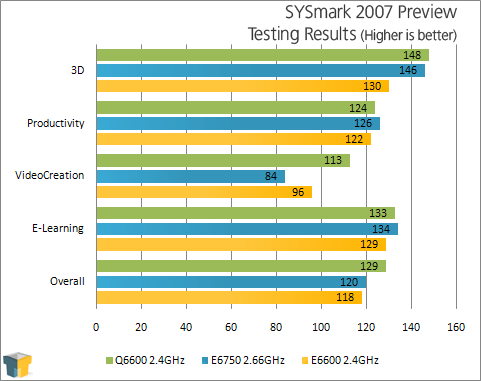 SYSmark can offer some odd results, but overall they scale accordingly to having a better CPU. The 3D test confuses me as the exact same GPU is used, however the E6600 scored far less. Our E6750 performed as expected though, beating the E6600 by two points overall. Not surprisingly, our Quad-Core beat the others in most of the tests, especially the VideoCreation.