Nothing can prove the performance of a PC better than real-world benchmarks. The only downside to real-world tests is that it’s difficult to compare to a friends computer, unless they happen to have the same software and media files that you are encoding/converting. We can show direct differences though, since we run the exact same tests on each processor.

To test video encoding capabilities, we ripped our “Lamb of God – Killadelphia” concert DVD and then used Nero Recode to convert it into something that can be burned on a normal sized DVD. The direct DVD rip is 7.7GB, and Recode compresses it into a 4.5GB one. 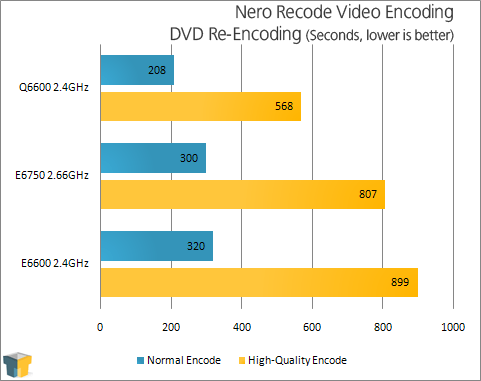 The high-quality mode showed a definite improvement with the E6750, proving to be 11% faster than the E6600. Given the fact that the clock speed is 11% greater, it’s to be expected.

If there is one audience who can benefit most from additional cores and CPU frequency, it’s the multi-media crowd, and that’s where our 3D Studio Max benchmark comes into play. We take a model that consists of 406 objects and 106,000 vertices, and render it at a high 3200×2400 resolution. 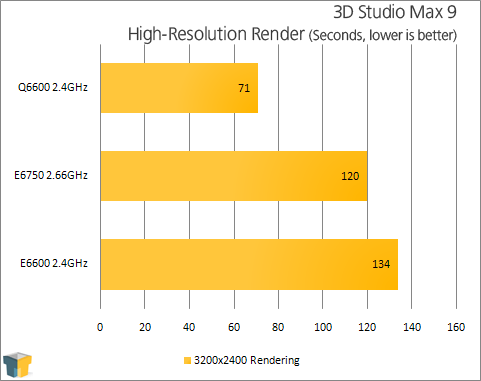 Neither Dual-Core was a match for the Quad-Core, but the E6750 once again showed a nice increase over the E6600. This won’t make a large difference in small renders like this, but larger projects it could mean the difference of ten minutes, or hours.

Like 3D Studio Max, Cinebench emulates a similar scenario, where you render a high-resolution image. The nice thing about Cinebench though, is that it spits out a nice, clean number and also shows you your gain when moving to multi-threaded rendering. 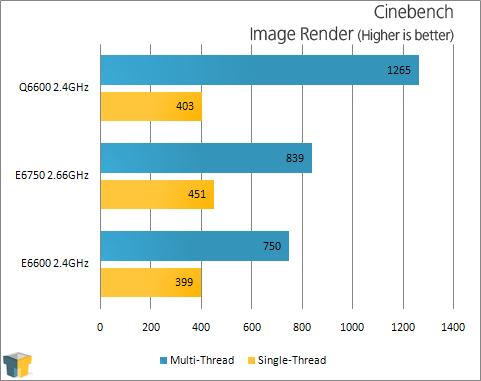 According to the scores, the E6750 was about 13% faster over the E6600. It’s easily seen that the most beneficial path to take though is with the Quad-Core. There is just no comparison if the application can handle multi-threadedness.