Though Futuremarks products usefulness are often disputed, we like to include them because they somewhat accurately show how one CPUs power will compare to another by giving a single clean number. 3D Mark 06 stresses the CPU in such a way an actual game would, while PC Mark puts it through tests based on real-world scenarios. 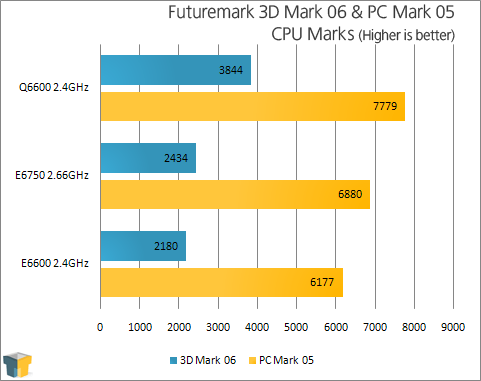 One interesting thing to note is that the Quad-Core didn’t blow away the other two. Of course it performed better, but it was far from being 2x. It looks like PC Mark is due for a serious upgrade. As far as 3D Mark 06 goes, the results scaled to our expectations.

Both Half-Life 2: Episode 1 and STALKER were benchmarked at 1280×1024 resolutions with default graphics settings. With the help of our 8800GTX card, we remove any GPU bottleneck and leave the rest of the work up to the CPU. 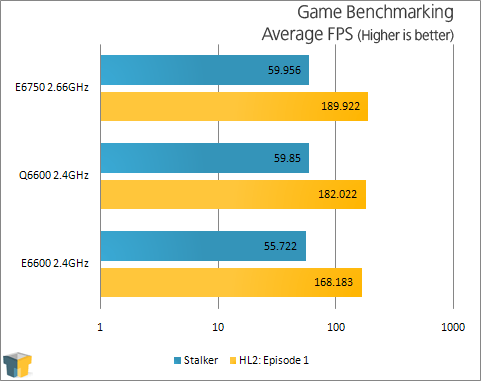 Stalker is apparently far more GPU dependant than CPU dependant, so as long as you have a good GPU and CPU you should be fine. Half-Life 2 on the other hand is one of the most CPU dependant games on the planet, so faster clocks always mean higher FPS.

For those worrying about overclocking potential, we are taking care of that next, followed by our final thoughts.