Before we delve into these two tests, we have to admit that these results are in no way definitive. We conduct these with rather simple means and variances beyond what our equipment can see might occur. That said, we still consider these results to be reliable, but for various reasons, they wouldn’t be 100% spot-on.

To test for power consumption, we use the trusty Kill-A-Watt monitor. For a reminder of our machine specs, please refer to our testing methodology page. Our Kill-A-Watt is plugged directly into the wall, and our PC directly into it. Nothing else shares the socket in order to keep fluctuations to a minimum.

For our idle results, we boot up the machine and leave it at the desktop for five minutes and grab the result that’s on the Kill-A-Watt. If for some reason the wattage is fluctuating, we’ll wait until it stabilizes. Vista can sometimes run random processes which can make it difficult to get a reliable result. For our load result, we run Cinebench R10 and grab the highest average wattage during the peak of the benchmark. 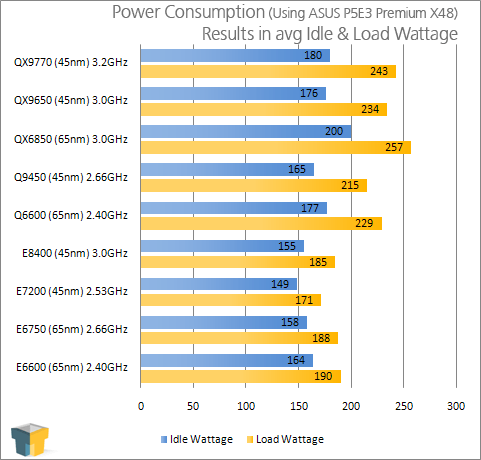 In the intro, I mentioned that though the E7200 is slower in frequency when compared to the E8400, its TDP is still 65W. Though the same, we saw a 14W decrease at full load. Part of this could be due to the smaller cache, but the lower overall frequency likely has even more to do with it.

To gather our temperatures, we use Everest 4.0 and record for five minutes after boot, while the computer sits idle. Afterwards, we load up enough instances of SP2004 to keep the CPU at 100% usage and again record using Everest for 15 minutes. After that, we grab both the idle and load average temperature. Please note that we grab the temperature for the entire CPU, not an individual core. 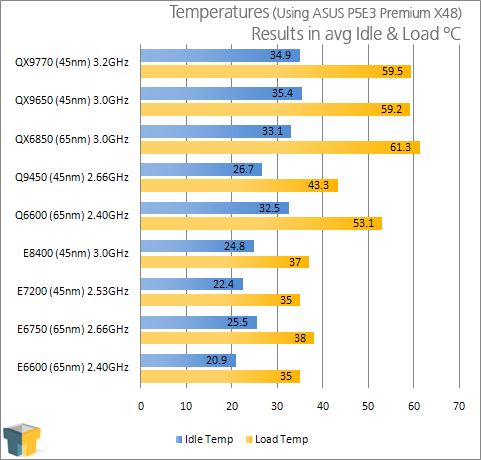 Interestingly, the fact that the E7200 is based on a smaller process doesn’t make it cooler than the E6600, but rather the higher frequency adds a couple degrees. Still, as far as Dual-Cores go, the chip keeps cool and that of course welcomes overclocking, which we’ll tackle next.