Enthusiasts sure struck gold when Intel launched the Core 2 Duo, simply because every single chip out the door overclocked like a dream. Some better than others, of course, but the best part of it all was that most overclocks require absolutely no extra voltage, so it’s a total no-brainer.

I was a bit skeptical when overclocking the E7200, because I haven’t had great luck with value offerings in the past. Overall though, I do walk away pleased with my results, but believe better results can be seen. I’ve seen other overclocks on this same CPU around the web, and most of them are at least 3.5GHz, which I was unable to hit. I might have a less-than-perfect chip, I’m not sure. 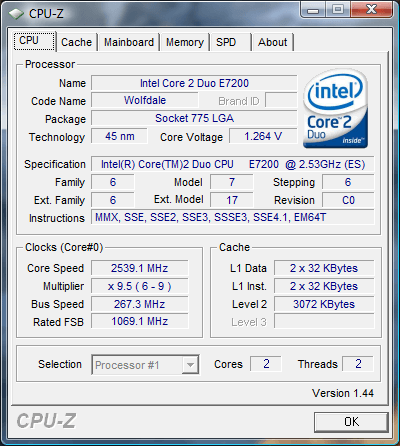 I somehow forgot to grab a capture before hauling the CPU out of the machine, but my favorite overclock on this chip was 3.0GHz because it was possible without touching the voltages. The best part, of course, was that it proved 100% stable over the course of 11 hours, putting it on par with the E8400 (minus the extra L2 Cache).

Bumping the CPU voltage up to a very modest 1.325V, the CPU managed to sit stable at 3.172GHz, a full 633MHz above stock and 172MHz above what we could achieve without a voltage increase. 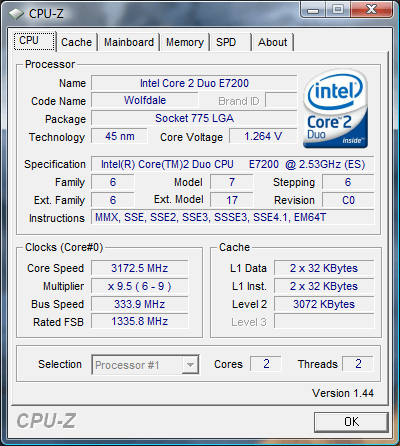 I quickly found out, however, that to get even higher, copious amounts of voltage would be required. 3.33GHz was the max stable overclock I could muster all while retaining a reasonable voltage of 1.4V. 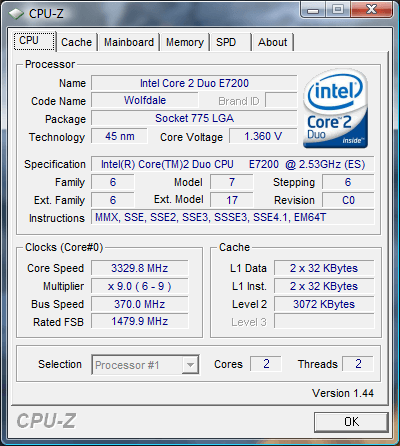 You might be asking, “Why didn’t you apply even more voltage?” and the answer is that I did. I pushed upwards of 1.55V into this sucker and didn’t manage to push it any further above 3.33GHz. I should note that when I say I wasn’t able to, I mean that I wasn’t able to achieve a stable overclock, which is all that matters to me. I did manage to boot at 3.6GHz and even a bit higher, but instability quickly reared its ugly face.

Though I had hoped to push the CPU a bit higher, I have no complaints about what was achieved here. For a $133 45nm Dual-Core, I am at incredibly pleased with the 3.172GHz overclock, thanks in part to the fact that it required virtually no extra voltage. At that point, it’s faster than the more expensive E8400, so who’s to complain?