There is no better way to evaluate a system and its components than to run a suite of real-world benchmarks. To begin our testing, we will use two popular benchmarking suites that emulate real-world scenarios and stress the machine the way it should be… by emulating tasks that people actually perform on a day to day basis.

Both SYSmark and PCMark are hands-free, using scripts to execute all of the real-world scenarios, such as video editing and image manipulation. Each one of these suites output easy-to-understand scores once the tests are completed, giving us a no-nonsense measure of seeing which areas our computer excels in.

SYSmark, from Bapco, is a comprehensive benchmarking application that emulates real-world scenarios by installing popular applications that many people use every day, such as Microsoft Office, Adobe Photoshop, Sony Vegas and many others.

SYSmark grades the overall performance of your system based off of different criteria, but mostly it will depend on how fast it could complete certain tasks and handle multi-tasking. Once the suite is completed, five scores will be delivered, one being the overall. We dedicate an OS and hard drive to this test in order to keep the environment as clean as possible. 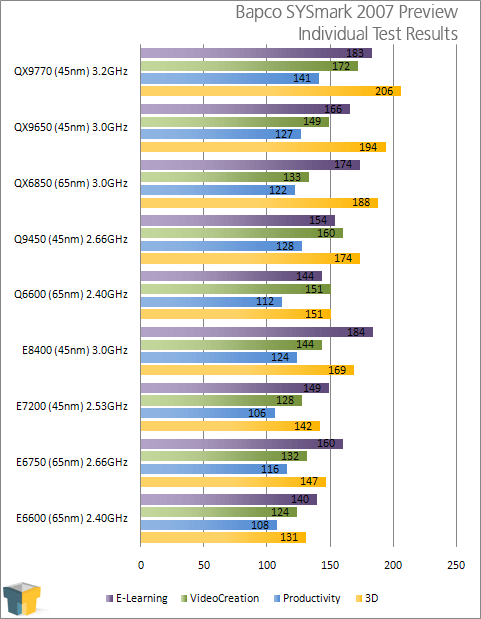 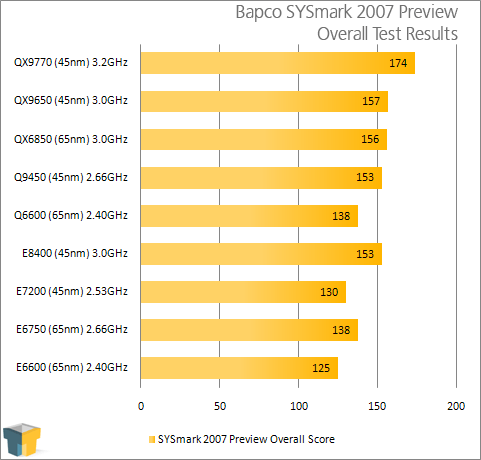 To walk away with a great result in this test, the CPU either has to have many cores, or a very high frequency. This is proven by the fact that our Quad-Core Q6600 only bested the E8400 Dual-Core by eight points. Clock for clock, SYSmark doesn’t take advantage of the 45nm-specific benefits, so our E7200 saw only a modest increase over the “old-school” E6600.

Futuremark’s PCMark Vantage has similar goals to Bapco’s SYSmark 2007 Preview. However, whereas SYSmark emulates real application use, PCMark is synthetic in all regards. Also similar to SYSmark, PCMark’s goal is to test your system with a handful of scenarios that you would find yourself in regularly, such as music conversion and photo management.

Although Vantage contains eight different suites in total, we focus on five. The ones that have been omitted, we find, are not too important or redundant. Our goal was to create a reasonable graph, and the more tests added, the larger it would become. We left out “Productivity”, for example, since that’s essentially SYSmark’s entire focus.

Like SYSmark, PCMark delivers simple scores once completed, one for each of the seven main categories and an overall “PCMark Suite” score, which is what most folks will use for comparisons. I left out two suites due to irrelevancy and to keep the graph a modest size. 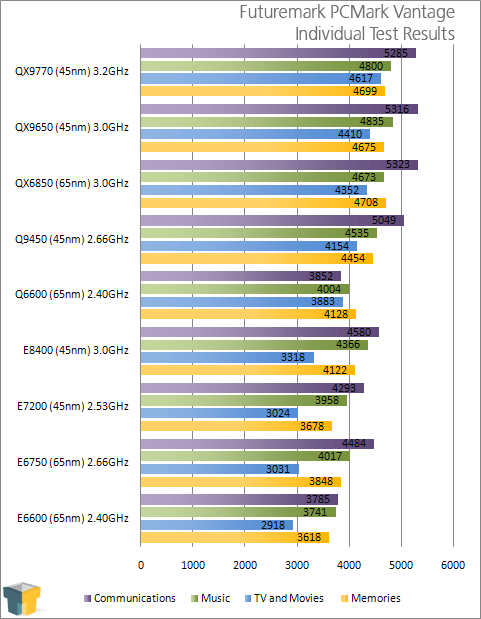 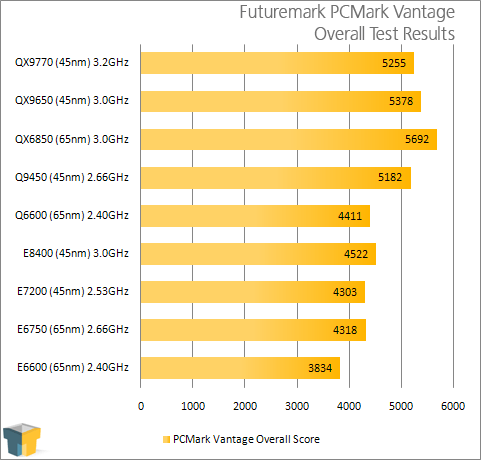