Intel today is announcing their 1333FSB Core 2 line-up, which consists of three dual-cores, including the E6750 we previewed a few weeks ago, and also the 3.0GHz quad-core that we are testing out today. Read on as we explore all of what Intel’s latest flagship processor has to offer.


When people think about faster processors, not many will think about the benefits of photo editing. But it’s true, multi-tasking in general is far more efficient on a multi-core processor, and so when running numerous photo-related applications at the same time, thing should prove quicker.

In an age when DSLR cameras are becoming more and more affordable, lots of people are now dealing with RAW file formats. Adobe Lightroom is a fantastic application for altering your RAW photos, which is why we chose it to benchmark with. The actual test consists of taking 100 RAW (Nikon .NEF) 10 Megapixel photos, and exporting them to JPG format, while at the same time, resizing all of them to 1000×667 resolution. 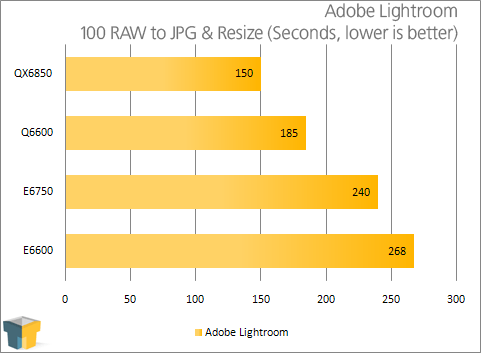 Thanks to the multithreadedness of Lightroom, the process speeds up with additional cores. It’s certainly not twice as fast, when compared to a dual core of the same speed, but the benefit is clear. Comparing the Q6600 to the QX6850, the latter proved 35 seconds faster overall. That’s quite a large difference when it’s a matter of three minutes for the entire process.

Even though multi-core processors are not necessarily new, it’s tricky finding a photo application that handles them properly. Lightroom was one, Photoshop is another. However, writing scripts for Photoshop is ridiculous. Instead, we are testing the single core benefit of ImageMagick, a popular image command line image editing application for Linux, Windows and Mac OS. It’s mostly used on servers, but serves the purpose here as well.

The benchmark consists of taking the 100 outputted JPGs from our last test and watermarking them. Then, it creates 500×335 thumbnails for each of those. 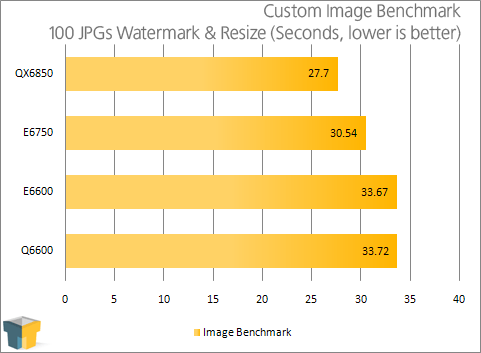 This test would be far more impressive if more than one core would be used, but this can accurately show you how performance for single-threaded applications could be increased simply because of the better frequency.