In most of our processor reviews, we focus on just a few popular titles to see if improvements can be seen. Because the QX9650 brings numerous benefits to the table, moreso than a just a simple speed bump, we are using a total of nine games in our review.

At this point, you may choose to skim our testing methodology page which lists full system specs and complete settings for each game used. Each game was run using 1280×1024 resolution, in addition to 2560×1600. It’s our goal to see if greater benefits will be seen at either the low-end or high-end scheme of things. Once again, all runs have been completed twice and the average FPS was recorded using FRAPS 2.9.2.

The result of the collaboration between 2K Boston and 2K Australia is BioShock, a game with outstanding visuals, creepy monsters, incredible sound and gameplay that can scare you out of your wits. The game takes place in an underwater city called Rapture, built in the mid-1940s, headed by Andrew Ryan. You know someone with two first names has got to be a little messed up, and that proves true quickly.

Built on the UE3 engine, the graphics are top-rate, making this a perfect game for stressing your system regardless of how high-end you believe it is. The level used is the first in the game. Our save begins us right outside the capsule and the gameplay leads us to a large room with a huge balcony (at this point you receive a second radio transmission from a friend). 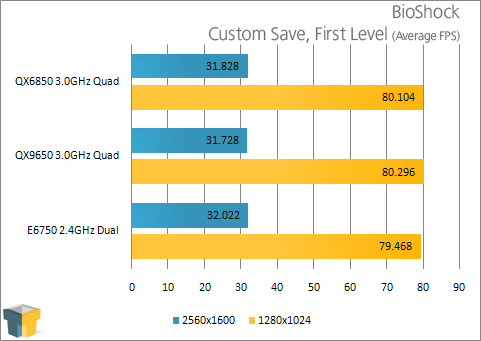 No gaming platform on the market sees that many western-inspired titles, so when Call of Juarez came out and proved to be a solid game, people rejoiced. The game features two main characters, the young Billy who has been accused of murder and also a religious Reverend Ray (perhaps the coolest western name ever), an ex-outlaw who doesn’t find it anti-religious to kill whomever gets in his way.

The level chosen here is Episode 3, which begins Billy out in a field along a path that leads to a farmers ranch. The goal is to progress through to the ranch, killing wolves that chase you down along the way, ultimately making it inside without being spotted in order to take off with the farmers horse in order to jump over a small chasm. 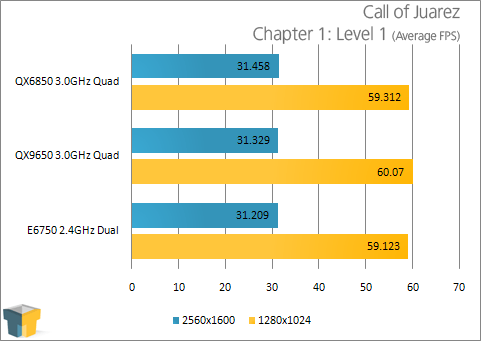 It’s hard to believe that we continue to use a game in our tests that has had two sequels released since. When Call of Duty 2 was released two years ago, though, it offered exceptional gameplay and crisp graphics. It was a total package, and I clearly remember dropping my jaw at various points throughout the game.

Demolition is our preferred level, which takes place immediately after the training mission. You start out in a small room with other soldiers and make the trek through to another building and then yet another building that resides beside a large field of trenches. This is where we end the level, which equates to around 3 – 4 minutes worth of gameplay. 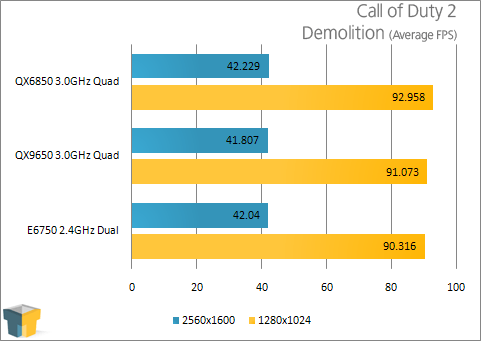 Not one of these games exhibited real increases in performance, but next up are two games that Intel claims will prove faster on a Yorkfield, Half-Life 2 and FEAR.