Although it seems like 45nm has been a long time coming, in reality, it hasn’t even been that long since 65nm made its own debut. If one thing is certain, this industry doesn’t slow down for anything, even technical hurdles such as the one the High-k dieletric corrects.

We’ve known for a while that Penryn was much more than a process shrink, but some of the performance increases have exceeded our expectations. The performance advantage of Penryn depends upon what the processor will be used for, however. As far as video conversion is concerned, SSE4 is going to prove a godsend for those who deal with these scenarios everyday. No matter how you look at it, a 40% increase clock for clock is incredible.

The problem with SSE4 at this point is the support. DivX does offer consumers a codec with support for the new instructions, but others do not. TMPGEnc, for example, does not believe their 4.4 XPress will be available until early 2008. Intel notes that other SSE4-capable applications will be available in the new year as well, including Sony Vegas, Pinnacle Studio Plus and MainConcept H.264 Encoder.

Given the performance increases exhibited with encoders that utilize SSE4 however, it’s unlikely that developers will ignore this and dilly-dally to add support. As far as non-SSE4 video encoders are concerned, we saw increases there as well, although at closer to 6%. Even still, clock for clock, any increase is welcomed, especially by those who regularly render very large video projects. These increases likely have the extra L2-Cache to thank. 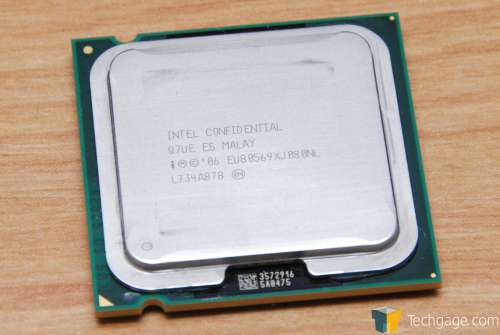 One area where Penryn will not cause stark increases in performance is gaming, however. Seven out of the nine games we benchmarked saw virtually no increase, while the other two, FEAR and Half-Life 2, saw double-digit gains. But as mentioned on those pages, the benefits of these gains are minor, as those games already have an average FPS well into the hundreds. Both of those titles are known for being extremely CPU-intensive, however, so future games that prove the same should also see similar increases in performance.

Of course one of the largest benefits of a smaller process is overall improved efficiency. We were pleased to see that when comparing the QX9650 to the QX6850, both power consumption and temperature were improved. With the QX6850 installed, our system wattage hit 303W at max CPU load, while our QX9650 decreased that to 273W, despite both processors having the same TDP rating of 130W.

Once again, pricing has not been disclosed and at this point it’s difficult to make a guess. Previous XE processors have been released for $999 in quantities of 1,000, but because this is a new microarchitecture and product release, there might be a premium. Right now, no one knows except Intel. Once these hit e-tailers, you could expect the price to be in the range of $1,100 – $1,300.

For those who choose to wait until the rest of the 45nm fleet arrives, you should be able to pick from a variety of different models in January, including non-XE Quad-Cores and Dual-Core models. From what we’ve seen, pricing will prove lower than what we saw with the initial Core 2 Duo launch. If reports are true, a 3.0GHz E8400 with 6MB of Cache can be had for $183 in quanties of 1,000, whereas last summer, a 2.4GHz E6600 with 4MB of Cache was offered for $316.

Should you purchase now or wait until January? It’s all a matter of wants and needs. If you are in need of a new machine now, then you have little choice. If you have patience and can hold out for two more months, you will be well rewarded.

Compared to current offerings, Penryn and Yorkfield processors offer faster performance overall, additional L2-Cache, the SSE4 instruction, better power efficiency and operates with cooler temperatures. The bottom line? Penryn is something worthy of being excited over.