There is no better way to evaluate a system and its components than to run a suite of real-world benchmarks. To begin our testing, we will use two popular benchmarking suites that emulate real-world scenarios and stress the machine the way it should be… by emulating tasks that people actually perform on a day to day basis.

Both SYSmark and PCMark are hands-free, using scripts to execute all of the real-world scenarios, such as video editing and image manipulation. Each one of these suites output easy-to-understand scores once the tests are completed, giving us a no-nonsense measure of seeing which areas our computer excels in.

SYSmark, from Bapco, is a comprehensive benchmarking application that emulates real-world scenarios by installing popular applications that many people use every day, such as Microsoft Office, Adobe Photoshop, Sony Vegas and many others.

SYSmark grades the overall performance of your system based off of different criteria, but mostly it will depend on how fast it could complete certain tasks. Once the suite is completed, five scores are delivered, one as an overall average and the others for each of the four categories. 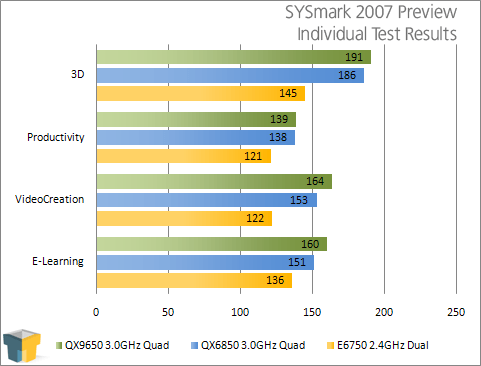 The QX9650 stormed past the QX6850 throughout all of SYSmark’s tests… a good sign. 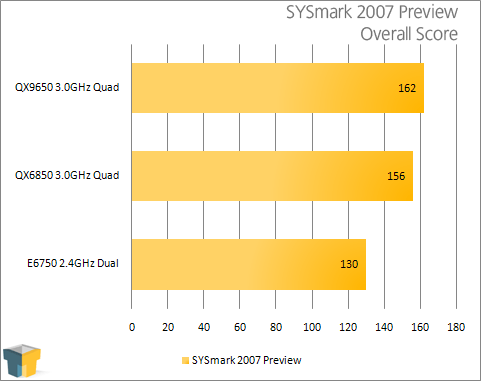 A six-point gain for two processors of the same clock speed, not bad at all. The extra cache could have been the factor to help it pull in front.

The most recent recruit to our testing suite is PCMark Vantage, an application that proves to be far more than a simple upgrade from a previous version. Vantage is a completely overhauled application, and this was evidenced by the fact that it took more than two full years to produce. Rather than having a PCMark that could complete in 15 minutes, Vantage’s entire run will take around 90 minutes, testing seven primary areas, such as high-definition video, image manipulation, music conversion, et cetera.

Like SYSmark, PCMark delivers simple scores once completed, one for each of the seven main categories and an overall “PCMark Suite” score, which is what most folks will use for comparisons. Because Futuremark’s products are notorious for fluctuating scores, the suite is run twice on each processor to make sure results are accurate. 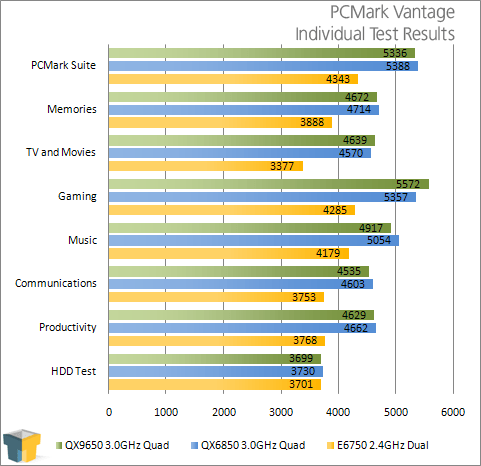 PCMarks results are somewhat difficult to go by as they can flucatate a lot, but overall, neither the QX6850 nor the QX9650 have a real advantage here.