Like 3DS Max, Cinema 4D is another popular cross-platform 3D graphics application that’s used by new users and experts alike. Its creators, Maxon, are well aware that their users are interested in huge computers to speed up rendering times, which is one reason why they released Cinebench to the public. Cinebench R10 is based on the Cinema 4D engine the test consists of rendering a high-resolution model of a motorcycle and gives a score at the end. Like most other 3D applications on the market, Cinebench will take advantage of as many cores as you can throw at it. 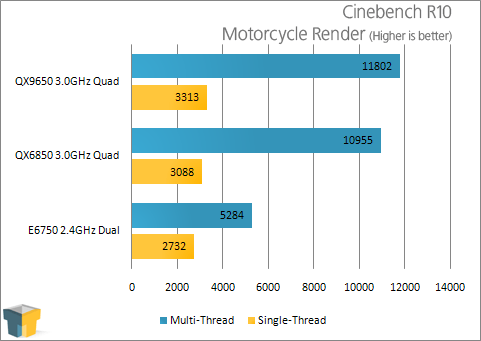 Intel promised us double-digit increases with Cinebench, and while I am unsure whether they meant double-digit percentages, we did hit 7.7%. Since Cinebench is based off of Cinema 4D, performance increases will be seen there as well.

POV-Ray is a ray tracing application which can render scenes with outstanding results. There are three major benefits of this application. First and foremost… it’s free. Second, it has a built-in benchmark that’s capable of stressing all of your processor’s cores and also scales well with frequency. Third, it’s available on a variety of platforms. There’s little doubt it’s an application that deserves inclusion in our processor reviews. 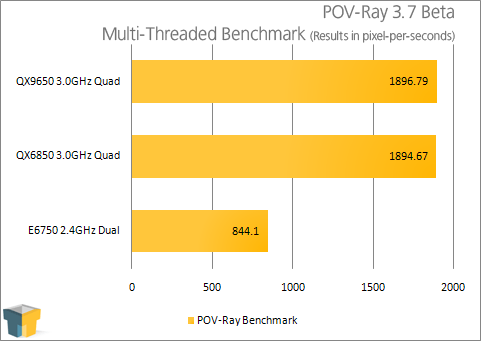 As we can now see, not everything will benefit from our newer processor. POV-Ray is heavily CPU-intensive, but doesnâ€™t seem to derive much benefit from the larger cache.

If you are a power-user and love free software (such as myself), then you no doubt have heard of 7-Zip. Although the application is similar to other compression applications on the market, such as WinZip and WinRAR, 7-Zip is completely free and lacks nothing that you need to effectively archive your documents.

For our test, we take a 4GB folder that’s complete with pictures, music, documents and other random files and compress it to a .7z file using the Bzip2 algorithm. The reason we choose to use Bzip2 over LZMA is because the former is entirely multi-threaded and proves a much faster result. It’s around 1% less effective than LZMA, but it takes 40% as long to compress anything, in my prior experiences. 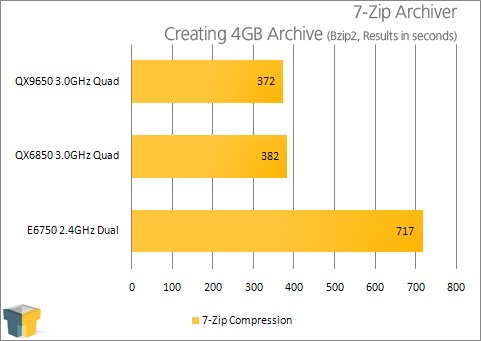 Our QX9650 doesn’t show huge increases all over the board, but it is indeed showing some increases in everyday tasks.