When thinking about faster processors or processors with more cores, multi-media projects immediately come to mind as being the prime targets for having the greatest benefit. However, anyone who regularly uses Linux knows that a faster processor can greatly improve application compiling with GCC. Programmers themselves would see the greatest benefit here, but end-users who find themselves compiling large applications often would also reap the rewards.

For testing, we used SabayonLinux Professional 1.1 x86. We normally use Fedora, but no version that we tried would function properly, and due to a tight deadline, we chose SL instead. Our problems with Fedora are not due to the processor, but rather either the motherboard chipset or our 8800GTX card. 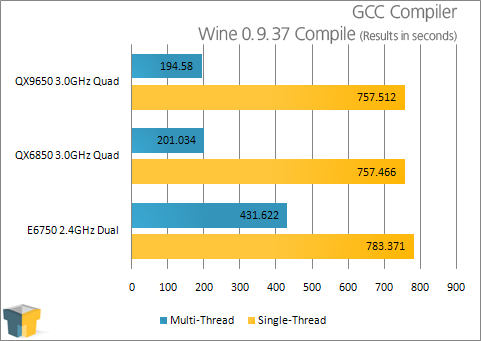 We didn’t expect much of an increase here, and in single-thread mode, there wasn’t. Using all four cores though, however, we saw a 3.6% increase over the dual-core E6750.

Even though multi-core processors are not new, it’s tricky finding a photo application that handles them properly. Lightroom was one, Photoshop is another. In light of the fact that it’s difficult to write scripts for more popular image manipulation applications, we are going to test the single core benefit of ImageMagick, a popular command line image application for Linux, Windows and Mac OS. It’s most commonly used on web servers, but can be used locally as well.

The benchmark consists of taking the 100 output JPGs from our Adobe Lightroom tests and watermarking them. Then, our script creates 500×335 thumbnails for each of those. This benchmark accurately represents the exact same process that our own review images go through. 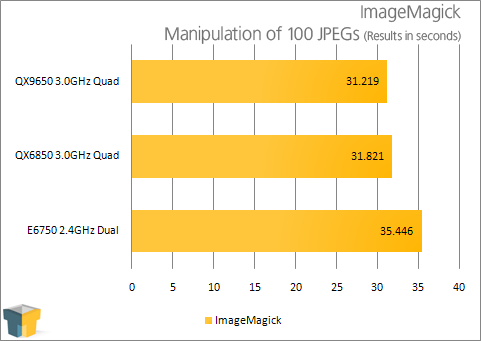 We even saw a minor increase with our ImageMagick run, but minor is the key word here. Next up, we will be taking the QX9650 through nine different games, to see if 45nm benefits can be seen there.