There’s no doubt that 2006 was one of the most incredible years in technology in recent memory. There were scandals, impressive landscape-shifting mergers, strange new alliances and many new products and technologies unveiled. One launch that stands out in everyone’s mind is Intel’s Conroe last summer. We were teased with leaked benchmark results and other information months before the release and once the launch finally hit, we were all relieved to see that it actually lived up to the hype.

After a launch like this, we didn’t think that a follow-up would arrive for a while. We were wrong. In the early fall, we first learned about Intel’s quad-core CPU, which is essentially two Conroes under the same IHS. I admit, I didn’t expect to actually see it so soon, but come November, it was publicly available for anyone to purchase. Intel’s at the top of their game, and don’t want to step down anytime soon.

When they first launched their QX6700, they held off launching the Q6600 until early January. We don’t know the reason for the delay, but now the possibility of having your own quad-core machine without breaking the bank has finally arrived. Let’s first get the basics out of the way.

The Q6600 is a 2.4GHz chip, like its little brother the E6600. Both CPUs are nearly identical and use the same die(s), except that the Q6600 has two of them. Essentially, everything is doubled. Twice the cores, twice the cache and twice the drool. Like the other Core 2 Duos, Core 2 Quads are based on a 65nm process, although the process requires a slightly higher stock voltage. Since both the Quads are so similar to the Duos, it’s no surprise to see that the die size is simply doubled as well, resulting in 2 x 143mm^2.

When compared to the top of the line QX6700 chip, the specs are again identical except for the 2.66GHz clock speed. Other than that, the CPUs are the same, just binned differently. When comparing to the top end Core 2 Duo, the differences are a lot more meaningful. While the QX6700 retails for just under $1,000, so does the X6800. However, when considering the QX6700, you receive a lower clock speed in return for twice the cores. At that point, it’s up to you whether you want or need the sheer clock speed or greater benefits for your multi-thread applications.

To help put everything into perspective, here’s a simple graph showcasing all of Intel’s current Core 2 offerings.

One interesting point to note is that even though the Q6600 is essentially 2 x E6600, the TDP is not doubled, but rather sits at a comfortable 105W. The higher clocked QX6700 is 130W, however, which is why we don’t see a QX6800 instead. A TDP of 130W is high to begin with, but considering the much slower 820 D we reviewed less than a year ago also had a TDP of 130W, power consumption still hasn’t entered uncharted territory, and there are thermal solutions available to deal with that kind of heat.

Below, you can see a highly detailed illustration of the quad-core’s innards. In case you thought that two dies would be a tight squeeze, think again! Despite having four cores, there’s still a reasonable amount of breathing room in there. For a more realistic view of the chip with the HS off, you can check out the picture provided by Intel here. 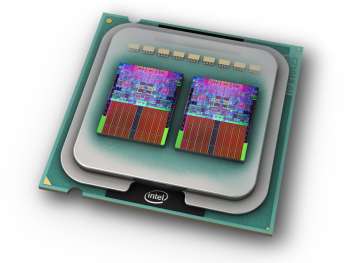 As far as the back of the CPU goes, nothing can better explain it than a photograph. The E6600 sits on the left while the Q6600 is on the right. The only difference is in the number of filtering components. 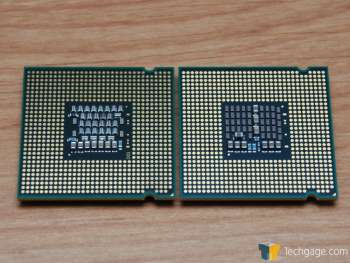 With introductions out of the way, let’s explore the reason Quad-Core exists and take a look at its future.