Our testing methodology is simple. Two copies of Windows XP Pro are installed, one for benchmarking with our usual roundup and the other strictly for SYSmark. Prior to any testing, Diskeeper 10 is run to defrag the hard drive. Miscellaneous files are removed as well, with the Recycle Bin emptied. The goal is to make sure that the computer is cleaned up so that it runs as smooth as possible. System services are left intact, with the exception of Diskeeper.

From a hardware standpoint, the computer is placed so that there is proper spacing on all sides. Lastly, the inside of the computer is kept tidy to reduce any potential for blocked airflow. Our testing rig configuration is as follows:

We’ve not reviewed many processors in the past, so our comparison charts are somewhat slim. These will grow over time as we intend to begin reviewing more and more CPUs. Graphical results will feature comparisons to Intel’s E6300 and E6600 chips, running at 1.86GHz and 2.4GHz respectively. The E6600’s specs are near identical to the Q6600 except for the reduction of two cores. This will prove interesting in a number of ways, primarily to see whether or not the extra cores will degrade performance in single-threaded applications.

In addition, a few select tests will also compare an AMD 4600+ X2, running at 2.4GHz. For that test rig, a DFI LanParty M2R/G motherboard was used. Both machines shared the same ram and ran at identical settings.

Throughout all of our performance reviews, we try to include as many manual benchmarks as possible since synthetic applications don’t necessarily represent real-world results. SYSmark is a combination of both. It’s a "real-world" benchmark, but fully automated. Essentially, SYSmark installs a variety of ‘everyday’ applications, including Microsoft Word and Photoshop, and creates a complete presentation from start to finish. The entire process takes over an hour and the result are clear scores of where the CPU excelled and where it didn’t.

Since SYSmark is not a true multi-threaded application, the gains seen here are not as impressive as they would be if it were. Even still, the Q6600 did show a clear advantage, while the E6600 falls slightly behind. 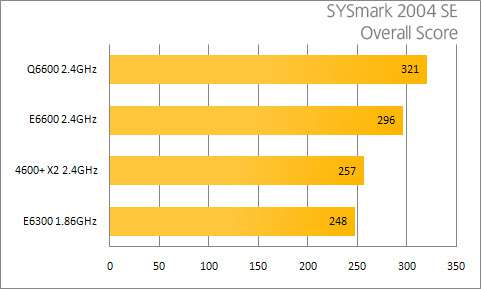 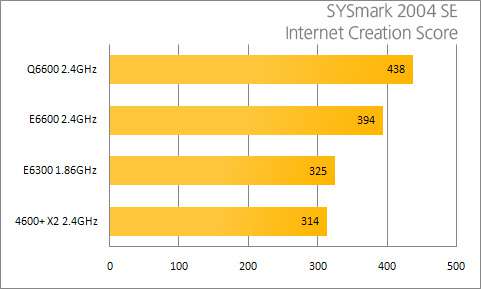 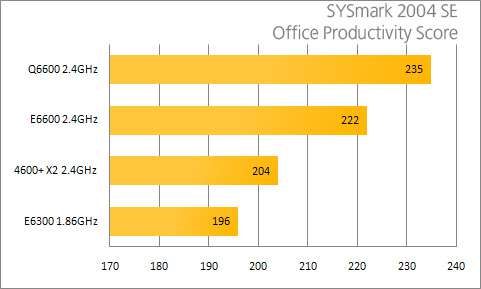 For overall system use, SYSmark results prove that stepping up to quad-core can indeed make for a smoother process. Even if you don’t use all four cores to their brim, the extra headroom beyond what two cores can offer becomes evident.