Normally when multi-core processors are mentioned, multi-media work immediately comes to mind. It’s one aspect of computing that requires a -lot- of CPU power and some mundane processes can take upwards of an hour to complete on a single core. Nero Recode has proven to be one of my favorite DVD encoding programs because of its ease of use. Once a DVD was ripped (using another program), I was left with a 6.0GB image. I then used Recode to re-encode this image to backup quality (~4.3GB).

By default, Recode uses all of the cores you have available, but it will use more of each depending on modes selected. I have found that in normal mode, it will utilize up to 70% of each core, while selecting the High-Quality mode will utilize upwards of 90% of each, but not more. So re-encoding a DVD effectively uses up 90% of a quad-core, which shows that certain everyday applications available -now- will take advantage of a quad-core CPU right out of the box.

Paying specific attention to the High-Quality results, the differences are clear. While certain multi-thread applications will usually show a performance gain of ~90% between a Dual or Quad core, we only see a 63% increase here when moving from the E6600 to the Q6600. Results like these will differ on a per app basis. Why Nero doesn’t utilize all cores to 100% is unknown to me, but it may very well be in order to let the user continue using the computer without noticeable slowdown.

Not only did moving from a Dual Core to Quad Core show a significant improvement, but the performance difference between the E6300 and E6600 displays the benefits from a slightly higher frequency as well. 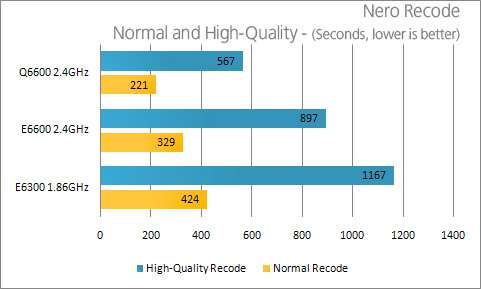 Next up is another popular multi-core scenario… the rendering of a 3D model. For this I used 3D Studio Max 7 and a helicopter model that consists of 406 objects and 106,000 vertices. It’s not one of the most intensive models out there, but it still gives a good idea of general performance gain thanks to adding cores or more frequency.

Seeing as how the E6600 and Q6600 have near identical specs, it’s no surprise that the results between the single core performance are strikingly identical. Simply moving from the dual core to quad core however, saw a 92% increase. Not much of a surprise since this is a true multi-thread application and has been for quite some time. Since larger 3DS projects can take days to render, it’s no surprise that people who are in charge would benefit greatly from a quad-core machine, or even octal-core, since it’s well within the realm of possibility to build such a machine using Intel quad-core Xeons. 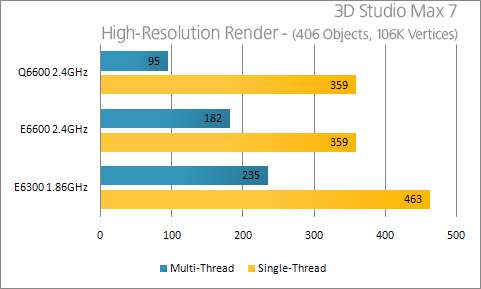 While multi-media and 3D rendering covers a lot of the people who would care about extra CPU power, there is a slew of other people who would just as easy benefit from extra cores. Those being programmers. While most hobbyist applications don’t take that long to compile, some more in-depth applications can take hours. When you are making constant changes to the code and need to re-compile often, having extra CPU power is a blessing.

For this testing, I used a Gentoo 32-Bit machine based on the 2.6.18-r6 kernel and GCC 4.1.1. Compiling was done using the i686 optimization set. When the Core specific optimization set is introduced in 4.3, we may see even greater results. The victim application used for compilation was Wine 0.9.30. For single core testing, “time make” was used while dual and quad core compilations used “time make -j 3” and “time make -j 5”, respectively.

Once again, the E6600 and Q6600 had identical single-thread results and another 92% gain was seen when moving from Dual to Quad Core. This solidifies the fact that if you have a true multi-threaded “workstation” application, the 92% gain will be pretty common if you were to make the same jump. I’ve compiled Wine countless times on my single-core AMD 3200+, so it was drool-worthy to see it being done in just over three minutes. 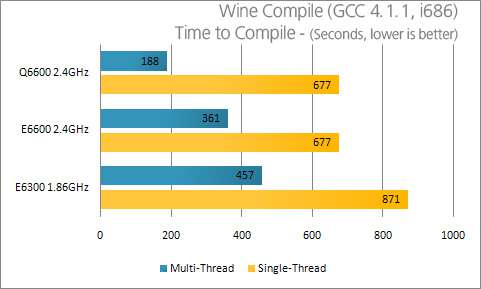 Now let’s move onto some popular synthetic benchmarks to see how beneficial quad-core is in that regard.