While real-world benchmarks are generally more accurate, synthetic benchmarks provide a useful point of reference to compare one CPU to another directly. Although they are synthetic, the results scale well with additional cores or higher frequencies, as will be evident in the following graphs.

Cinebench has long been one of my favorite benchmarking tools, because it uses a similar process to 3D Studio Max. It simply renders a high resolution image and spits out a final “score” to show you how well the CPU has performed. It also makes it easy to test as a single-thread or multi-thread application and displays the speedup multiplier to show just how much gain is there.

This is one application where massive gains are not immediately seen. Take for example the E6600 results, where moving up to multi-thread only showed an 83% increase, instead of the 92% we have been used to in the previous results. The same applies for the Q6600 testing, where we saw a result that was 322% of the single-thread benchmark. This is likely due to the fact that the cores are not being completely stressed. When this program was written, quad-cores were probably a laughable thought. 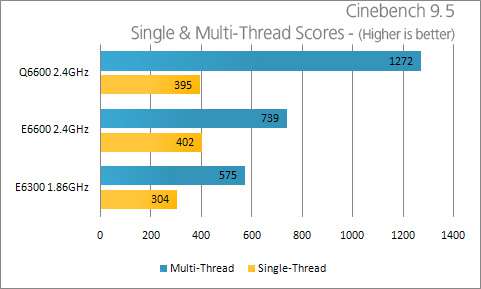 While at CES, we dropped by Intel and they showed off their 8-Core Xeon machine, consisting of two quad-cores. If that’s not drool-worthy in thought, seeing Cinebench render the image with all eight cores was truly impressive. I don’t recall the exact final score, but it didn’t matter because I was more concerned with picking my jaw up off the floor.

As far as synthetic benchmarks go, SANDRA is by far my favorite. A large bonus is that it’s truly multi-threaded, so the resulting scores really show the capability a larger CPU has. Interestingly enough, this is one benchmark that actually showed a greater than 100% improvement when going from Dual to Quad. The MFLOPS result showed an impressive 104% increase. 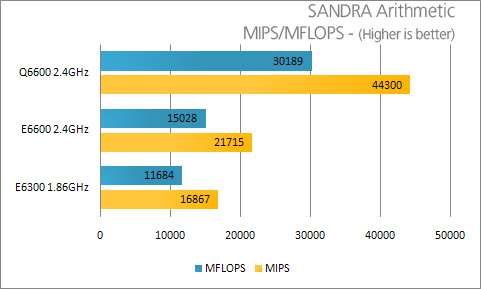 Those results were not a one-off though, as the Multi-Media scores showed off the exact same gains. This further demonstrates why synthetic benchmarks are not perfect representations of real world gains. 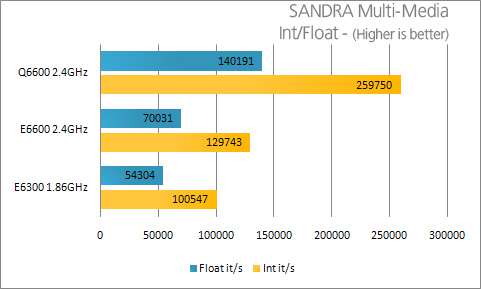 While memory controllers on Intel motherboards aren’t as robust as those on AMD CPUs, the question still remains as to how much bandwidth is “too much”. Whether or not there is an appreciable difference between 5000MB/s and 8000MB/s is difficult to determine. The multi-media capabilities of Intel CPUs normally overshadow any potential gains in memory bandwidth, however.

We can see below that the E6600 has slightly better overall bandwidth, but not by much. The extra gain could be due to the more constrained interconnects between the two cores, instead of four of it’s bigger brother. 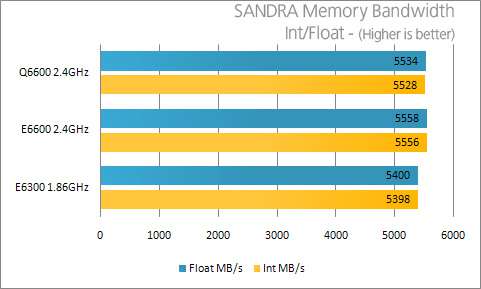 How could any CPU evaluation be complete without including one of the most popular synthetic benchmarks on the planet? 3D Mark 06’s CPU test is geared more toward showing the differences between processors in gaming. The higher the overall score, the more information your CPU can toss around. Here we see similar results to Cinebench… not 90% but closer to 75%. 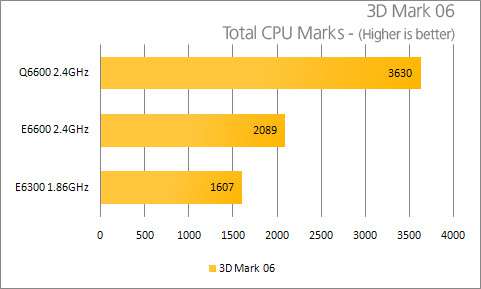 PC Mark 05 is already outdated despite being only two years old. Its CPU tests only have two true multi-threaded benchmarks, so the differences are not that clear. No doubt the next version will include far more multi-thread specific benchmarks than single-threaded ones. 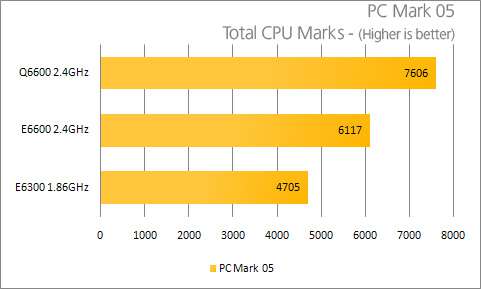 Gaming is another concern when moving up to a quad-core. Questions abound as to whether a quad-core CPU will provide a meaningful boost to gaming, and that’s just what we are about to find out.