As mentioned on the previous page, there are many questions that arise when considering a quad-core system. One of the main ones is whether it will hurt or help your gaming performance. Another question revolves around what games out there will support more than one core. We’ll delve into these questions, but will only consider a few games. At this point in time, there is not a big need to run extensive benchmarking throughout six different games simply because there aren’t any games available to us that would be largely affected by extra cores. When multi-threaded games are more commonplace, then you can expect in-depth gaming performance analysis to become the norm.

That said, I will be testing out Half-Life 2 and Oblivion between all of the CPUs. I chose Half-Life 2 because it is far more CPU dependant than GPU dependant. Oblivion is used because it’s a system hog all around, CPU and GPU. Whether a multi-core CPU will make a difference here will be evident.

First we have Half-Life 2: Episode 1, where I played through one of my favorite levels in the game, ep1_c17_02a. This is a great level for a variety of reasons. There is heavy use of HDR and you get to shoot down an airship to seek revenge for it killing a friendly before your eyes. The minimum and average FPS were recorded using FRAPS 2.8.2. This was a complete manual run through, so differences are going to be apparent since each trial can bring on different circumstances. This makes it a real world test.

The results further prove that this game is largely CPU bound. The E6600 had an 8 FPS advantage over the E6300, although the Q6600 fell a few frames behind. Whether or not this was due to different circumstances in the game is not known, since I only ran this run once. The answer is clear though. No, quad-core will not harm performance. 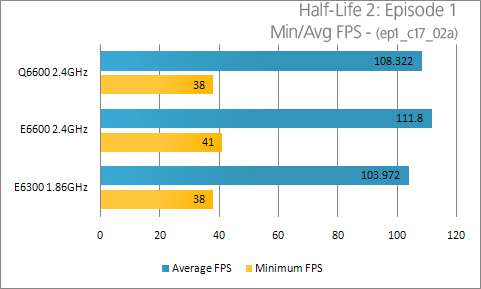 While the last test was purely manual, I wanted to test out a timedemo to see if the results would become even closer. To do this, I created a 3 minute timedemo in Half-Life 2, using the d1_canals_07 level. Timedemos are strictly for benchmarking to see how well your GPU and CPU can stack up. As you can see, the difference between the top two CPUs are a half of a frame per second. The lower clocked E6300 still had a superb average FPS, but fell 10FPS behind the others. This is a benefit of extra clock speed, not extra cores. 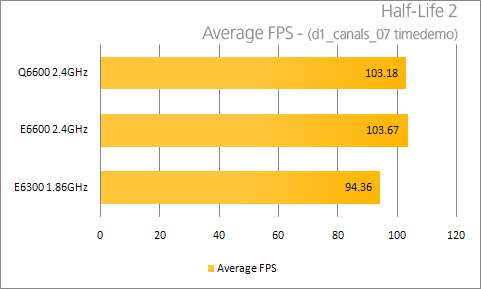 Oblivion, like Half-Life, needs no introduction. It is regarded by many as by far one of the best games of all time (certainly my favorite) and can put a true strain on current machines. Not only is the GPU stressed to the limit, so is the CPU. Once again here, we can see that there is virtually no difference between any of the CPUs for this game. While the minimum FPS is better on the Q6600, the overall averages are very close to one another. It goes to show that this game is far more GPU dependant than CPU. 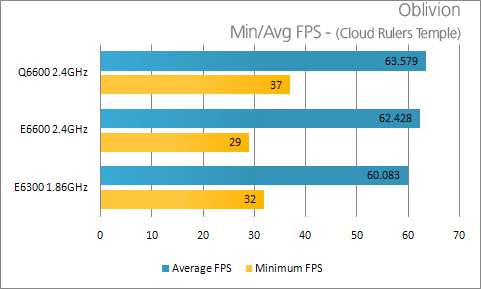 Although current games don’t offer true multi-threading, ones right around the corner will. We will talk about that next.