Dual Core CPUs have been in consumers’ hands for a couple years now, but it was a slow process before we started seeing applications exploit them. Today, things are different. Most of our everyday applications are multi-threaded, including a few that we benchmarked earlier. Nero is one of the ones that stands out in my mind, because I use it regularly. It’s not always the multi-threaded applications that people care about though, it’s the fact that they have spare cores to play with.

There’s been one major gripe ever since we first received Dual Core CPUs, namely that there are no games out there that support them. The benefits would be obvious. Some newer games are not just taxing on your graphics card, but CPU as well. Using a Dual Core, you’d essentially be doubling the amount of information that can be passed along. It sounds good in thought, but the problem is that few developers are taking an initiative.

The most common complaint from game studios is that making a multi-thread game is not an easy task. In fact, it requires additional training and understanding in order to execute properly. This results in a more costly title in the end. Time is another factor, for obvious reasons. Planning out a multi-core capable game takes a lot of planning to make sure it flows as it should.

That being said, the future for gaming is still bright. It will be a while before multi-threaded gaming becomes commonplace, but later this year we should be seeing a few titles that will effectively use additional cores. Will these extra cores wipe out the need for a physics card? Probably not right from the get-go, if at all. Like GPUs, PPUs are highly optimized for the specific type of calculations they perform. But in the end, we will likely see extra cores used as common practice far before we see a physics card becoming mainstream, simply because -every- gamer out there will have a CPU, while PPU add-on cards are another expense.

While visiting Intel at CES, they showed off two demos, both of which I examined in-depth over the past week of testing. The first was their Ice Storm Fighters, which was developed by Futuremark exclusively for them. There is one reason this demo was developed and one reason only, to show the immediate benefits that a multi-core processor can have on gaming. Reminiscent to the Tie Fighter scene in Star Wars episode IV, Ice Fighters consists of a large snow covered level that has many vehicles and Mechs right in the heat of battle.

There are two options at the main screen, Low and High. High is for quad-core CPUs while Low is for dual-core. This demo stresses ALL cores like no other game, so if you choose High while using a dual-core, it will lag significantly. You have the ability to add or remove bots if you want, but the more you add will simply slow down the demo even further. Even with just 20 units on the screen, it put all four cores to good use.

The cores are essentially being used for physics engines, where all of the AI and particle effects are being placed on each core. Not only is the actual AI stressing the CPU, but everything else in the scene, including left over bullet marks in the snow, which you can see an example of in the picture below. 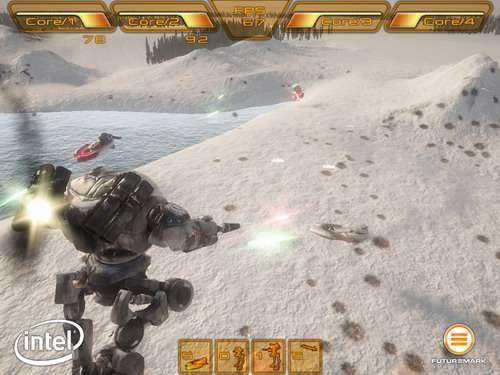 While this demo can be manually played, it’s not designed to become a full blown retail release, it’s strictly a tech demo. What it proves though, is that multi-core processors can be used to their full potential in gaming and have obvious benefits. Instead of bullet-hole decals fading away after a few seconds, the extra CPU power can be used to keep them there, resulting in a more realistic experience. Lets face it, in this day in age it is weird to play a game and see your bullet-holes disappear right after you put them there.

This is just one example though, but it goes to show that extra cores can be put to good use -if- the developers want to go that route. One thing I will mention is that installing the Ice Fighters demo will also install the AGEIA PhysX engine. So while you may not need a PhysX card up front, AGEIA seems to have a good thing going with their API. To give the demo a try for yourself, you can grab it here. You do need an Intel dual-core or quad-core to use the demo; it will error on an AMD.

In addition to their Ice Fighters demo, Intel showed us even more benefits of multi-core processors using Valve’s Particle Benchmark. Essentially, this is another physics type demo that throws all of the particle computations onto the CPU. Particles could be a number of things.. smoke from a gun, rain, a waterfall, et cetera. The difference here though, is instead of these being pre-rendered objects, they are all computed in real time, which is why it’s so taxing on the CPU. The processor is computing the scene as it happens to give a more realistic experience. 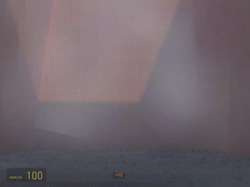 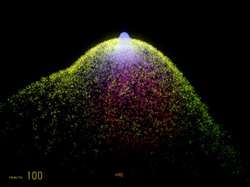 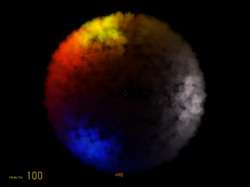 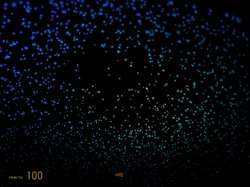 That said, unlike the Ice Fighters demo, this is an actual benchmark. It consists of you walking up to a terminal and pushing a button, which will then automatically deliver four “simple” scenes that stress the CPU with particles. As simple as the tests seem, it spits out an even simpler score. 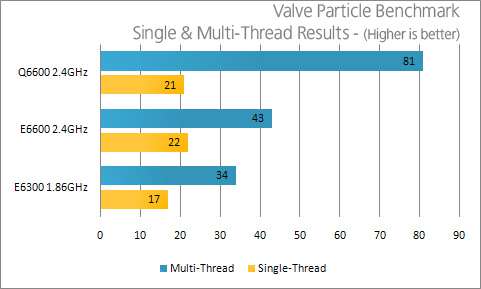 As you can see, as the cores are increased, the results scale accordingly. The E6300 for example had a 100% increase when moving from single to dual core. While this “benchmark” doesn’t really mean much in the grand scheme of things, it again shows that multi-core CPUs can be used to their full potential in gaming.

The good news is that multi-core games, despite being hard to code for, will become more commonplace as time goes on. It’s a matter of consumer demand, and bragging rights in pushing the performance envelope. Some engines currently available already offer good multi-core capabilities out of the box, like Unreal Engine 3 which powers such games as UT3, Gears of War and Rainbow Six: Vegas. Game companies that license the engine will likely have an easier time creating their game around a multi-core CPU.

One example benefit of multi-core gaming is in regards to a quote from an interview with a UT3 developer. I haven’t been able to track down the exact article, but what was mentioned was that UT3 (the artist formally known as Unreal Tournament 2007) -could- use up to five cores out of the box, one for each class of gameplay, whether it be particles, AI, physics, etc. Whether or not that was a quote of “what is” or “what could be”, it shows that a few developers are interested in getting the ball rolling on working with multi-core possibilities. It’s just a matter of waiting it out for now…