In the past year, there have been many products released that had a lot of potential, but were not worth the money for most people. Although AGEIA’s PhysX card is gaining momentum, it’s still been out for a year and there is still little content, so it’s essentially there for those who really don’t care about their $250. Then there’s the Killer NIC… but I won’t get into that here. When I first heard about Kentsfield, I, like so many people, was a tad skeptical. The fact is though, after thorough testing, I no longer find quad-core to be as needless as I originally pictured it to be.

This is not to say that I recommend a quad-core CPU to everyone, simply because most people will not even touch the sheer power that is available. Heck, most who own a dual-core may not even benefit from it. Without question, hobbyist programmers, graphic designers and also multi-media developers would benefit incredibly from a quad core.

As we found out during our testing though, it’s not only multimedia and simulation designers who would benefit from the processor, but everyday multi-taskers as well. Nero for example is multi-threaded, so all of your DVD and video encoding projects will complete far quicker on a quad-core compared to a dual-core at the same speed. Aside from single multi-threaded applications, there are further advantages to a quad-core. Multi-tasking will prove a smoother ride than on a dual-core, especially if you run multiple large apps at once. I mentioned in the intro about a common scenario, to play a game while encoding a DVD. Well the quad-core takes it one step further, simply because it will perform that task even quicker while playing that game.

One thing I wanted to consider was whether or not using a quad-core would decrease performance for any current apps, simply because of the larger interconnects. Those concerns were rid quickly. There is no significant decrease in any of the applications or games we tested with. Where there were slight differences between the E6600 and Q6600, they were incredibly minute.

Do you need this CPU? Only you will be able to answer that question. If you do a lot of multi-tasking, then the benefits are there, no question. I am not talking about juggling Solitaire, Notepad and Calculator, but heavier multi-tasks such as recoding a DVD while working on a spreadsheet while watching a video while surfing the web while writing a review about a quad-core CPU. The fact of the matter is, while having four cores at your disposal won’t matter to most people, if you have the money to spend and enjoy the extra freedom, you’re not likely to go wrong with a quad-core system. 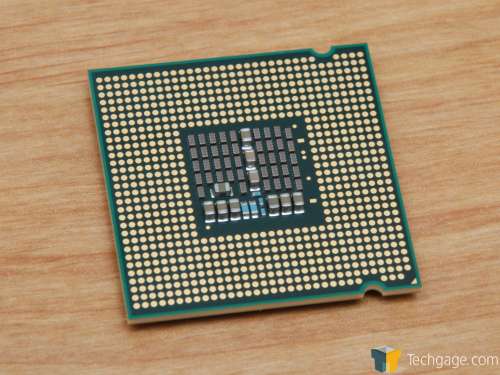 So, what’s the cost of going quad-core? Currently, the Q6600 retails for around $900, while an E6600 retails for closer to $325. Essentially, you would be doubling the CPU capabilities for almost triple the price. One added benefit on top of the obvious is the fact that you can have quad-core without a dual socket processor. Another plus is that the power consumption is lower with a quad-core CPU over a multi-socket motherboard solution like QuadFX, with two dual-core processors. The quad-core performance of the Q6600 does come at a premium. It shouldn’t be too long before we see prices drop though, if you don’t mind the wait.

While the Q6600 is a great processor, I don’t recommend upgrading from another Core chip you already have, unless you specifically want the added multitasking and multithreading benefits. Some people are willing to slap down over $900 for a CPU… some aren’t. Either way, it’s a great addition to any rig.

You may have noticed that I didn’t touch on a few points in this review, namely power consumption and overclocking. I have a Kill-A-Watt en route, but of course as is my luck, I did not receive it in time for this review. As far as overclocking goes, I am still in the process of finding the maximum stable overclock. For the record though, I did manage to hit a 100% stable overclock of 2.8GHz on air. Both power consumption and overclocking will be covered in an overclocking-focused article in the near future, so stay tuned for that.

After reading through this review, you probably have a far clearer idea of whether quad-core is for you. Although pricey, it has some huge benefits for those whose application software can make use of the extra cores. For some, the extra performance will greatly overshadow the higher cost. As it stands, this is one fantastic CPU and performs as well as we had hoped. Because of that, as well as its significance in pushing the envelope of performance, it’s earned itself our Editors Choice award.