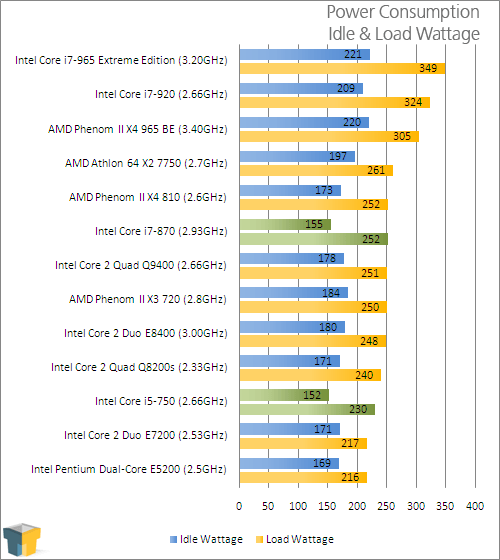 The results above are nothing short of staggering. The Core i5-750 used less power at idle than the lowly Dual-Core E7200, and it hardly pulled out ahead at full load. Where the Core i7-870 is concerned, it used far less power than the i7-965, yet proved itself to only be ~10% – 15% slower than the faster i7-975 throughout all of our tests.

Lynnfield is more efficient than Core 2 overall, but the drop seen here no doubt has a lot to do with the removal of the Northbridge. With us down to two chipsets, less power is required, and coupled with already power-efficient processors, the results are amazing. Just wait until we see the mobile version (Clarksfield)…

When Nehalem launched, we received processors that were more powerful than anything we used before, and the brand-new architecture was a lot of fun to experiment with. But as I said before, there were a few reasons why people either chose to go with Core 2 or didn’t upgrade their machines at all. Hopefully, Lynnfield will get people to build the rigs they’ve been holding out for.

Let’s kick things off with the Core i5-750. This chip has a caveat… a lack of HyperThreading. Depending on what you do on your PC, that omission may or may not mean much. For me personally, I’ve become a huge fan of HyperThreading ever since the Nehalem launch, because there are many scenarios when it will come in handy.

For workstation-type applications, HyperThreading isn’t so much a luxury, but a requirement. The gains in performance in such applications as 3ds Max can’t be ignored. If you don’t have HT, your renders are taking a lot longer to complete. Fortunately though, for those who don’t use workstation apps often or at all, don’t have too much to be concerned over.

Thanks to the Turbo alone, the i5-750 kept near the top of most of our charts, only to be surpassed either by a CPU with a greater raw frequency or by one that had HyperThreading. In our Adobe Lightroom and TMPGEnc Xpress tests, Turbo did enough to keep this lowly $200 CPU ahead of everything else we’ve tested, aside from the faster Nehalem’s of course

Couple that with the fact that the new chip overclocks well, the $199 price tag is going to be heartily welcomed by those who want to build a fast new PC and not empty their wallet.

So, how about the new Core i7’s? Like the Core i5-750, the Core i7-870 is simply an incredible offering. Thanks to its HyperThreading capabilities and improved Turbo, it scored right under the Core i7-975 Extreme Edition in most of our tests, and if it didn’t, it was never that far off. This, for a CPU that costs 45% less. That’s impressive.

With this kind of performance being exhibited, the Core i7-950 isn’t so much a viable option right now, unless prices are dropped, because both retail for around the same price, and I’m confident that the i7-870, thanks to its Turbo mode, would beat out the i7-950 in most tests. In this case, it all boils down to what’s more important, the features of X58, or slightly improved performance. For dual-GPU configurations, the i7-920 – i7-975 are still the best options, thanks to the dual PCIe 16x capability.

To be honest, I feel that the best processor of the three launched today is the one we didn’t test, the Core i7-860. We can make this assumption because it’s not much slower than the i7-870 (2.93GHz -> 2.80GHz), and still retains HyperThreading. Yet despite the slight drop in its overall frequency, it retails for only $285. After seeing what the Core i7-870 can do, seeing something just a bit slower for $285 is exciting. If I had the need to upgrade or build a new machine right now, the Core i7-860 is the model I’d run to.

I think it’s safe to say that with its Lynnfield processors, Intel has successfully redefined processor value, regardless of which model you’re looking at.

What about our overclocking results? Don’t fret… they’re en route. Due to some complications prior to publishing (thanks to the CPU cooler), and the looming embargo time, we didn’t manage to get the overclocking pages in we hoped to. Stay tuned though, as we’ll soon be unveiling all of our overclocking information in a special two-page article. You won’t want to miss it, trust me!