Page 2 – Taking a Look at Lynnfield

With Nehalem’s launch, we saw the introduction of a slew of features that, when combined, made the end product into something outstanding. We finally saw the memory controller move from the Northbridge to the CPU itself, and a triple-channel one at that. We also welcomed the QPI, or QuickPath Interconnect, a high-speed bus designed to increase efficiency between CPUs (in a multi-processor machine) and the I/O controller.

But where Lynnfield is concerned, we seemed to be moving backwards. These new CPUs don’t feature a triple-channel memory controller, but rather revert back to a dual-channel. We also lose the QPI bus, which has been again reverted back to DMI. Despite these losses, it’s hard to not consider Lynnfield a huge win in other regards, especially when you consider that QPI and a triple-channel memory controller wasn’t that important to begin with for desktop consumers. 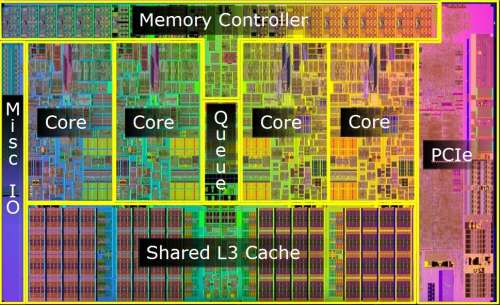 But with the few losses, we get a lot of gain. For one, the PCIe graphics lanes have been moved from the Northbridge to the CPU itself, and as a result of that and further scaling, the Northbridge has been eliminated entirely. Because the term “Southbridge” would imply a “Northbridge” exists, the ICH (I/O Controller Hub) becomes the PCH (Platform Controller Hub). So when referring to Lynnfield or P55, the term Southbridge could be deemed incorrect, depending on how you look at things (the chipset is still located south on the board). 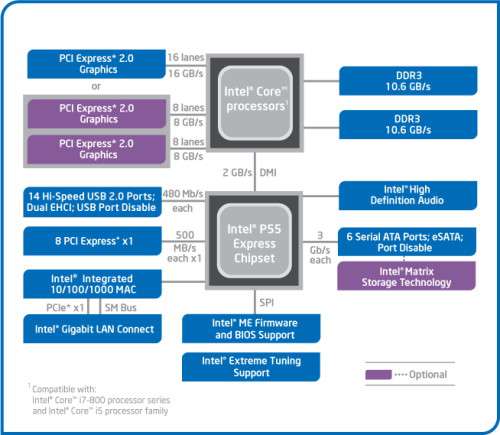 That’s one packed chipset! While the CPU includes the PCIe support for the graphics, support for the others is left up to the PCH. Also in the PCH, support is available for Intel’s Matrix storage technology, USB ports, HD audio, networking and so forth. The DMI bus replaces QPI (or FSB) to assist transactions between the CPU and Southbridge (I can’t shake this term from my head!).

Key features that Intel is pushing for Lynnfield include fasterperformance (+20%), lower power (>50%) and also a “sleeker design”. Thanks to the omission of a Northbridge, Intel claims that the overall package size across both chipsets has been reduced by 40%. Each one of these are important, and the first two in particular is what’s going to sell Lynnfield, and as we’ll see in our performance reports, it’s for good reason.

As with previous CPU launches, Lynnfield sports the usual slew of features we’ve come to expect, such as Smart Cache. Of course, unlike Core 2 and like Nehalem, we have Turbo Boost and HyperThreading, the latter of which is only available on Core i7. Also, like Nehalem/X58, both ATI’s CrossFireX and NVIDIA’s SLI is supported here, but in a dual configuration of 8x. SLI in particular will only be available on boards where the board vendor opted for “validation” by NVIDIA. For those who want the ultimate in gaming performance (multi-GPU), Nehalem is still the way to go on the Intel side. 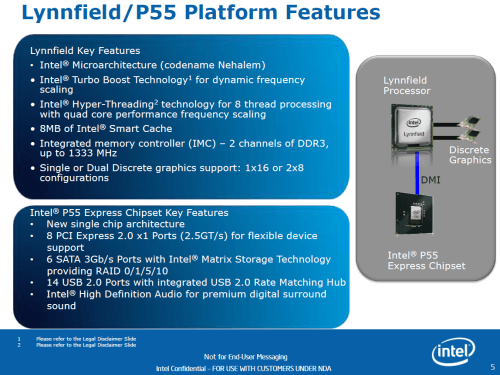 Over the course of the past few years, overclocking has proved to be a lot of fun with Intel processors. With the Core 2 launch, the sky was the limit, and even people who didn’t care for overclocking before then, began giving it a try. With Nehalem, the process of overclocking became a little more complex, as you had more than one clock and set of voltages to take into consideration (like Uncore).

Lynnfield simplifies things. There’s still more factors to watch out for when compared to Core 2, but the options in the BIOS on P55 motherboards is more limiting, so in a way, Lynnfield is easier to overclock. Don’t be scared off by any potential lack of control in the BIOS, though. Unless you are going for extreme overclocks, chances are you’re not going to be disappointed.

Like Nehalem, we have a couple of clocks to be on the lookout for: Host Clock, Uncore and QPI. Wait, what? Here’s where things get a little confusing. Even though Lynnfield doesn’t have a QPI bus, which has been known for a while, vendors, including Intel, can’t seem to keep it straight. For example, in a guide we were given, we can see screenshots of Intel’s own overclocking utility, and in the corner, it refers to a QPI bus. But, all of their other documents clearly state DMI. 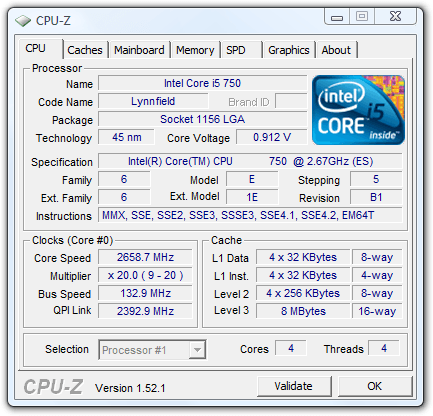 To make matters worse, other companies aren’t helping. In the BIOS on the motherboard we used for our testing (Gigabyte P55-UD5), it refers to a QPI link speed, and as you can see above, CPU-Z calls it the same thing. I haven’t loaded up any other motherboards than this, but according to the ASUS manual, it refers to the clock as “PQI”, which I’m sure is just a misspelling of QPI (the manual was printed long ago, I’m sure).

Intel’s BIOS doesn’t refer to a QPI clock or DMI clock at all, but they do show screenshots of CPU-Z that refer to it as the QPI Link. The entire situation is a little odd, but I think for the sake of keeping it simple, we should always refer to the bus as being the DMI bus on Lynnfield. Intel was clear that QPI was dropped, and while the frequencies match up to what we saw with QPI on higher-end Nehalems, we can chalk that up as a coincidence. The DMI bus has not improved over what we saw on the Core 2 platform.

The DMI bus is calculated by multiplying the Host Clock by the chosen multiplier in the BIOS, which in the case of the i5 and i7 Lynnfields, is 16x or 18x (so, 133MHz * 18x = 2394MHz). Depending on your processor, the Uncore clock works on varying frequencies (16x multiplier on Core i5, 18x on Core i7). When overclocking a Lynnfield, you can control the voltage of the CPU itself, and also the bus, or in the case of our Gigabyte board, the “QPI/Vtt”.