Page 3 – Turbo Gets a Boost

With Nehalem’s launch last fall, one of the most notable features to talk about was Turbo. When we first learned of the technology at IDF 08, which was held just a few months prior, I didn’t put much thought into it, except to say, “cool.”. It wasn’t until we received our samples to benchmark with that we realized just how important Turbo would be.

The concept is simple, but the added performance is worth noting. When a processor capable of Turbo is pushed hard, it has the ability to automatically “overclock” one or two cores in order to beef up the performance of applications that aren’t completely multi-threaded. That means, that when running a single-threaded stress of any sort (as long as the other cores are idle), the frequency would go up. In the case of already-launched Core i7 processors, the performance boost could be up to 300MHz or more.

In most cases I can think of, Performance Boost = Awesome, so there was no complaints to speak of. On Nehalem, there was a small limitation, however. By default, Nehalem processors are clocked in such a way to give the first core up to a 2x multiplier boost, and the others a 1x. For example, on the Core i7-965 at 3.2GHz, the multiplier is 24x. But with Turbo enabled, the first core could be boosted up by way of a 26x multiplier, with the others bumped to 25x.

Lynnfield takes things a bit further, and as a result, the Turbo aspect actually puts what should be “mainstream” in a more impressive light than what Intel considers their enthusiast part (Nehalem). The below slide explains it in simple detail. If just one core is being pushed, then it has the capability of being pushed far beyond the stock clock. Move over to two threads, and each of the two are boosted, but not to the degree as during a single-thread stress. Stress all four however, and each one gets a boost, but to a much lesser, yet still noteworthy, degree. 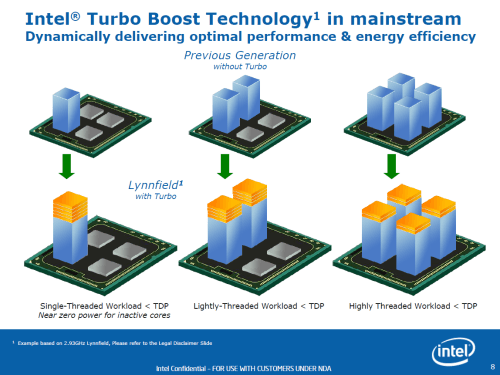 To help put the effects of Turbo into perspective, I downloaded a new program developed by Franck Delattre, creator of CPU-Z, called TMonitor (short for Turbo Monitor). What it does is allow you to see in real-time how each core/thread is being hit by Turbo. Sounds simple enough, but this is an incredibly useful tool (and might become more so once logging is implemented) and one that’s fun to watch.

Please note, you can click any of the below images to get a view of the entire scene.

When our Core i7-870 was completely idle, we could see with TMonitor that our cores were sitting at around 1.18GHz… far below spec, but beneficial for power-savings.

With the help of POV-Ray, we stressed just one thread to see how far Turbo would boost the frequency, and the result is nothing short of incredible… a full 580MHz boost on top of the stock frequency.

When we ran POV-Ray once again, this time as a multi-threaded test, we limited the application to use only half of the available threads, which resulted in a lesser overall gain. This time, we saw 3.38GHz across two cores, or 450MHz above stock.

Nehalem wowed us with its Turbo feature upon launch, but Lynnfield, not surprisingly, takes things to the next level. Regardless of the scenario you put on your CPU, you’re going to get a free performance boost, and that’s worth being excited over. This is especially beneficial for those who want great performance but don’t want to overclock the processors themselves. This way, Intel does it for you, and your CPU remains under warranty.

To keep things simple, let’s do the math with our real-world examples above:

Turbo, to me, is quite humorous. It’s a feature that exists only because Intel’s processors overclock with absolute ease, and even with a 20% increase on one core, the company is still playing it safe. As we’ll see later in the article, Turbo isn’t just for non-overclockers, but rather, it plays an imperative role if you want to reach the highest overclock possible.