With Intel’s official Core i7 launch coming up within the next few weeks, the time to choose which parts you’ll need for your new build is now. Whether or not you “need” an upgrade is going to be something only you can answer, but our in-depth preview from last week should be a good starting point. By the end, you should feel a lot more confident about your decision.

In that article, we mentioned that there would be a few considerations you would have to bear in mind if considering an upgrade, or a brand-new build. One of the more important is memory. In the preview, I mentioned that it’s best to upgrade to a memory kit that’s designed for X58/Core i7, because previous DDR3 kits may have an issue with the new motherboards.

It didn’t take too long before I experienced this first-hand, but I did have a workaround. That was to boot up the machine with a kit I knew would work, manually change the voltages and timings, then swap back. After that, the PC booted fine. It goes without saying that this is not an ideal solution for most people, especially if you only have one DDR3 kit on hand. Nor is it much fun having to tweak every-single timing setting in order to have absolute stability.

If money isn’t a huge issue (and assuming you’re upgrading to i7, it probably isn’t), you may be better off opting for a special kit designed exclusively for the platform. That way, you can avoid any potential headaches, and know that you’ll be installing a kit designed with this specific platform in mind.

How Much and How Fast?

In this brief article, we hope to answer that exact question. The answer will of course depend on personal needs, but I think for most people, what will be “required” is going to be about the same. If you run a workstation PC or a server, then you obviously want more memory than the average consumer, while the average consumer would likely prefer overall speed than density.

Because Core i7 brings a triple-channel memory controller with it, purchasing a kit of RAM for the platform is going to be a very different experience compared to previous builds. The reason is simple… kits will include three sticks of memory, not two. This might seem like an odd-ball way of changing things, but as evidenced in last weeks article, triple-channel can mean huge bandwidth. 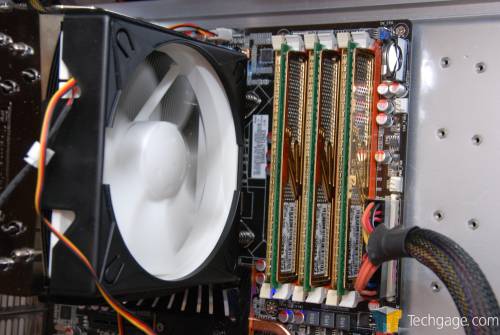 Because recent PCs utilize a dual-channel memory controller, common practice was to purchase either a 2GB or 4GB kit, as odd numbers aren’t possible with an even number of sticks (at least if you are dealing with even densities and are not mixing and matching), but that changes with i7. Instead of 2GB, 4GB or even 8GB kits, we’ll be dealing with 3GB, 6GB and 12GB.

The question comes down to “how much do I need?”, and for the most part, this is actually quite easy to answer. The reason is because for most enthusiasts, the choice of 3GB is going to be eliminated right away. At this point in time, 3GB isn’t a substantial amount of RAM, and most people have been using 4GB in their machines for the past year at least… so to actually downgrade would be an odd step to take. The major increase in bandwidth doesn’t exactly counteract the lack of density, sadly.

With today’s games and high-end machines, 3GB can become very limiting, especially if you want to run Windows Vista alongside games at a resolution of above 1680×1050. Today, 4GB is almost a minimum, and even 3GB isn’t going to be good enough. On i7 though, it’s either 3GB or 6GB if you want your memory to be optimized… there’s no in-between.

The other option is to take the outrageous route and pick up 12GB, but that’s going to be overkill for the vast majority of people. If you need that much RAM, then you’d likely know it without reading this article. Even intensive render jobs won’t usually take advantage of more than 6GB, so I think that will be the most common configuration for most people.

Memory frequencies also come into play, and this article will aim to figure out whether or not faster RAM is actually needed. After all, if Core i7 enables great latencies and insane bandwidth on lower-end kits, is there any reason to go with a “high-end” model? In previous generations, the benefits of having faster RAM was to both increase bandwidth and decrease latencies, and really, things don’t change much with i7.

Even before jumping into our results, it’s safe to say that the lower latencies will make a far more important difference than increased bandwidth. Under no real circumstance can I see application performance differences on a PC with 20,000MB/s bandwidth compared to another with 30,000MB/s. Lower latencies equal faster transactions, and that’s what’s going to be important in real-world situations. Things could change in the server market, but this article is designed to take care of our number one type of visitor, the enthusiast.

On the next page, we’ll give a brief overview of our configurations and testing methodology, then jump right into benchmarking to see if that high-end kit you’ve had your eye on is really worth the money.