by Rob Williams on November 3, 2008 in Processors

With Core i7’s launch due in just a few weeks, there’s no better time than right now to take a hard look at its performance, which is what we’re taking care of today. In addition to our usual performance comparisons with last-gen CPUs, we’re also taking an in-depth look at both QPI and HyperThreading performance, and some of our results may surprise you.

Due to a couple different factors, I’m not going to spend a lot of time in this article talking about overclocking, and I’ll explain all of the reasons why by the end of this page. Rumors have had it for a while that Core i7 wasn’t going to be as overclockable as Core 2, and for the most part, that’s true, but as usual, it depends on a few different things.

Like previous generations, the Extreme 965 processor has an unlocked multiplier that’s capable of hitting 40x. That in itself tells us that the skies the limit, because with a stock Base Clock and that multiplier, the result would be a 5.32GHz overclock. Something tells me that’s not going to be too common. Bump the BCLK to a reasonable 166MHz, and things get even more unlikely, with a core clock of 6.64GHz.

The same cannot be said for non-Extreme models, though. Both the 920 and 940 have capped multipliers, which are equal to their stock multiplier. For example, the 940 is a 22 x 133MHz processor, so 22x is the limit as far as multipliers go. The only way to increase the CPU clock is to increase the Base Clock, eg: 166MHz.

From that standpoint alone, Core i7 processors are much more difficult to overclock because the Base Clock is far harder to bump up than the Front-Side Bus ever was. To put it into an easier perspective, picture that a 166MHz Base Clock was possible on your particular motherboard. Using a 920 with its stock multiplier of 20x, the best possible overclock would be 3.32GHz. 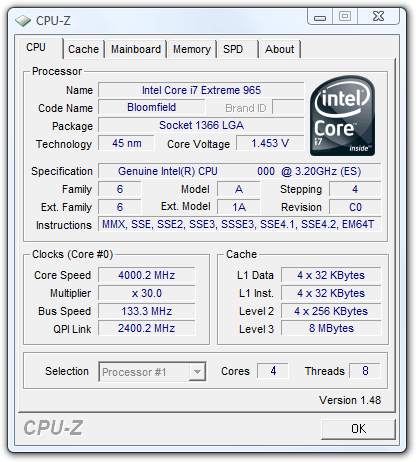 That fact can be a little upsetting at a time when we are so used to seeing current-gen Quad-Cores hit 3.6GHz stable with modest voltages. On Core i7, that’s not going to happen with a budget CPU too easily, unless you manage to bump the Base Clock to a nice level and have it remain stable. Due to my current lack of overclocking experience on i7/X58, I cannot make a reasonable guess as to what the max BCLK will be for most motherboards.

To make matters a little worse though, I’m not even sure what to expect in terms of overclocking-ability on the Extreme edition, although there are a few things that are holding be back from concluding on anything. Throughout all overclocking and testing in general, Intel’s own DX58SO motherboard was used, which, if history proves itself again, other enthusiast motherboards will offer greater potential.

However, 4.0GHz wasn’t supposed to be too much of an issue on the DX58SO board, but I found that to be the furthest thing from my own experience. While I did manage to hit 4.0GHz (133×30), it in no way was stable, and most times I couldn’t even pass a single Cinebench R10 run.

That’s one issue I was speaking about, because I know for a fact that 4.0GHz is possible on this CPU and that it can run Cinebench runs over and over, so I’m led to believe either our copy of the CPU is less-than-stellar, or I need to toss it into another motherboard and spend a lot more time there.

The reasons I have doubts about my own overclocks is that I’ve been seeing 4.0GHz on this processor since earlier this year, and that was on even earlier silicon than this. In addition, during a visit with Intel this past June, they had this exact model CPU running at 4.0GHz on an air cooler, and it was running just fine.

It’s for those reasons that I know more time needs to be spent with overclocking, and hopefully my eventual outcome will be far better than my outlook right now. Likewise, I look forward to seeing what other editor’s have accomplished with their own overclocks, as that will about prove whether or not our particular CPU has issues.

It goes without saying though, that overclocking on Core i7 is a lot more complicated than overclocking on Core 2, and that’s too bad, but is understandable given the major architectural changes. Overclocking will be a subject in particular that I will be tackling more this coming week, so please keep an eye on the site as I plan to talk about it in far greater detail, and hopefully at that time, I’ll be able to report my stable overclocks as well.