by Rory Buszka on September 29, 2008 in Motherboards

We’re taking a look at Intel’s first attempt at a full-featured media center motherboard, the DG45ID. It’s also our first look at their new G45 Express chipset, which promises to finally bring DX 10 support and hardware-accelerated HD video playback to their integrated graphics offerings. Can the DG45ID prove itself a worthy choice for your HTPC?

With value-level integrated-graphics motherboards like the Intel DG45ID, we don’t often expect to see much in the way of BIOS tweaking-ability, especially when it comes to overclocking features. Inexpensive motherboards often leave out voltage adjustments for the CPU, chipset northbridge, and memory, and some that we’ve tested have even left out the ability to adjust the CPU’s frequency or system bus speed.

Since most people who purchase this motherboard will seek to pair it with low-power CPUs and fairly ordinary RAM, and use it for recording video or accelerating HD-resolution video playback, BIOS tweaks and overclocking do not figure as heavily into our conclusions for these motherboards. With that, let’s take an in-depth look at the DG45ID’s BIOS menu, and see what tweaks are actually on offer. 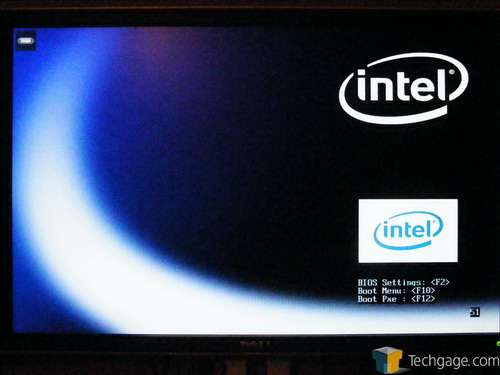 Upon booting the system, this is what you’ll see. The Intel DG45ID provides a full splash screen, with keystroke hints for accessing the BIOS and viewing the boot screen. 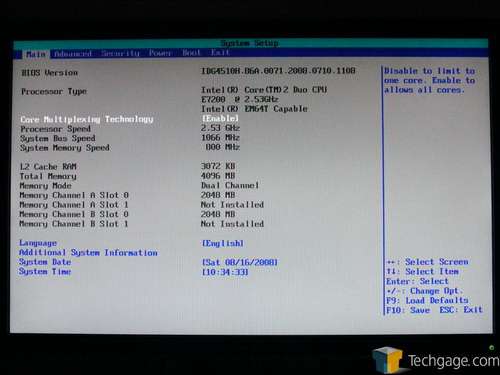 The DG45ID’s main BIOS screen is more informative than most that I’ve encountered at this price point, with detailed processor, memory, and system bus information. Other low-priced motherboards I’ve seen have cluttered this page with relatively meaningless information about the installed storage configuration. However, the DG45ID BIOS presents information that’s more of interest to enthusiasts and system builders. 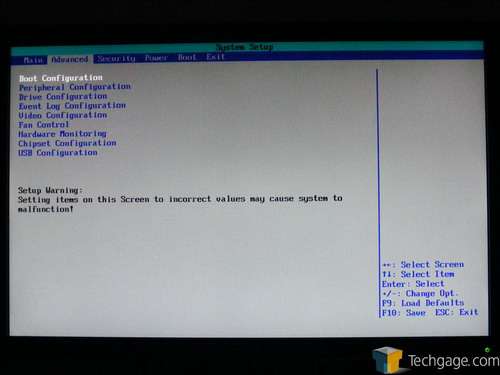 The ‘Advanced’ section of the DG45ID’s BIOS is your gateway to the adjustments that will unlock more of the DG45ID motherboard’s performance. While the DG45ID (like most newer motherboards) does a decent job on its own of discerning the appropriate settings for ‘stock’ performance, there are a few settings you’ll want to make sure you adjust manually to get the most out of the DG45ID. 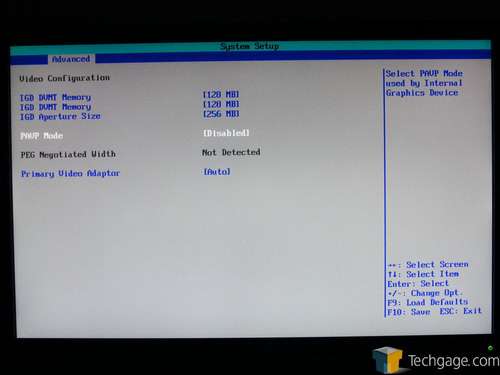 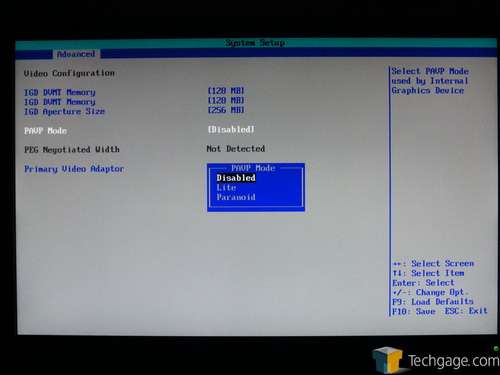 The Video Configuration screen of the DG45ID’s BIOS allows manual setting of the frame buffer and aperture size used by the onboard GMA X4500HD graphics core, as well as a setting called “PAVP” – which stands for Protected Audio Video Path, a scheme for encrypting protected content as it passes from a software application to a hardware component, in this case the X4500HD graphics core.

The default setting for PAVP is “Disabled”, but a setting of ‘Lite’ or ‘Paranoid’ is required for the G45 chipset’s hardware acceleration of HD video to operate properly. Why this isn’t set by default to ‘Lite’, I’ve got no earthly idea, since not every user will think to check this setting in the BIOS to enable hardware-based HD video decoding functionality. (On a side note, ‘Paranoid’ is an extremely appropriate term to describe the PAVP scheme itself. But you didn’t come here to read a content-protection rant, so I’ll move on.) 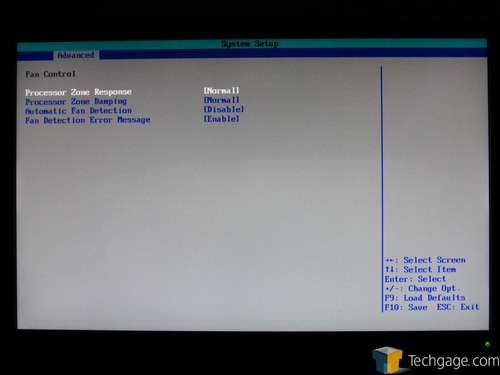 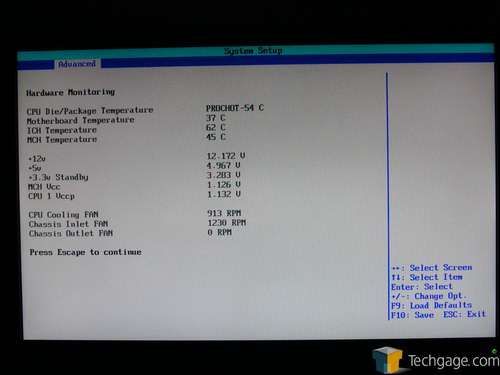 The DG45ID doesn’t offer quite as broad of a range of thermal management options for its fan headers, but it does offer plenty of sensors, including a temperature sensor in both the northbridge and southbridge. (Unfortunately, I couldn’t get Speedfan to recognize either of them.) The voltage readings are carried to three decimal places (that is, millivolts), and they update continuously, so the numbers appear to jump around quite a bit more than they actually do. You’ll see a core voltage reading for the G45 GMCH (northbridge), but don’t get too excited – you can’t actually adjust it, or overclock the X4500HD graphics core.

The DG45ID’s fan speed control settings allow you to set how quickly the processor fan responds to CPU temperature variations, and how often the fan speed varies as it keeps the CPU at a constant temperature (the ‘Damping’ parameter). However, there’s no setting to completely disable the speed control function entirely, which might be a turnoff for some. An even bigger bummer is the omission of an option to disable Intel’s “SpeedStep” functionality, which throttles the CPU when its entire throughput capability is not being used. 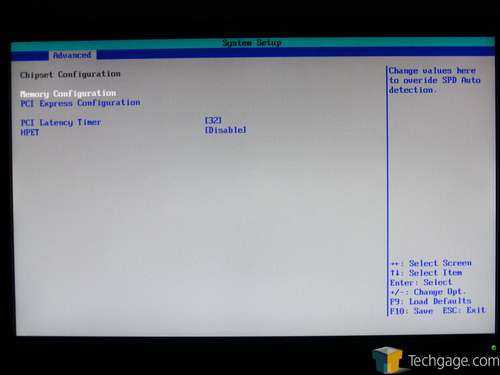 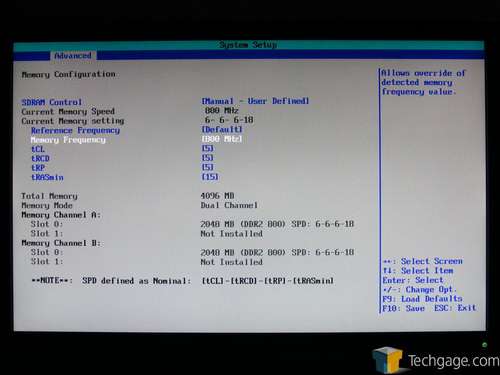 The Chipset Configuration screen is sparsely populated – the only linked page that offers anything of interest is the Memory Configuration page. Here, you can set the reference and operating frequency for your memory, as well as the typical set of four timing values that most RAM manufacturers specify. That’s it – no voltage adjustments or additional timing values.

At first glance, these options seem fairly meager. But then again, the target audience for the DG45ID motherboard likely won’t care much for tweaking the system to its maximum performance; they’ll be much more concerned with building a power-efficient home theater PC. Let’s move on to our performance testing and see what kind of performance you’ll be able to expect from the DG45ID.