by Rob Williams on November 30, 2009 in Motherboards

For most consumers, Intel might not be the first name to come to mind when building a new PC, but the company offers a rather robust line-up of boards for each chipset it releases. We’re looking at the $140 “mainstream” DP55WG, which has an simple overall feature-set, but includes support for IR and also NVIDIA’s SLI.

Here at Techgage, we’ve taken a look at numerous motherboards from the likes of ASUS, Gigabyte, EVGA and others, but there’s one vendor I’ve never dedicated a full review to, Intel. In truth, we do need to work on expanding our motherboard reviews to include other vendors more often, so let’s use this Intel review as our kick-off.

The DP55WG mainstream board from Intel is not the first board I’ve spent a fair amount of testing time with, and over the years, I’ve become quite familiar with its offerings. Each time our friends at the company send along a processor based on a new architecture, they’ll usually toss a board into the mix, and if possible, its those boards that I perform all of our initial testing with. Intel’s boards might not be packed with mind-blowing features like some of the others on the market, but it’s nice to have confidence knowing that the company spent a lot of time and effort making sure its board is as stable as can be.

Unlike most of the “launch” boards we receive from Intel, this one was sent to us long after it launched its Lynnfield architecture (which we took an in-depth look at here). It noted that as a mainstream board, it’d be worth a look, and at around $140, I had to agree. So, I had high hopes.

Were those hopes fulfilled? Would I really answer that at the beginning of the article? I don’t think so! Let’s first get our tour of the board out of the way, and then move into our test results, to see how the DP55WG stands up against the competition.

When Intel told me that this board was built for a mainstream audience, I pictured what the $140 board would look like. Although most of the motherboards we take a look at range between $150 – $200, I had assumed that what I’d see with this board was something similar at the $150 range, meaning a good amount of features for most any regular consumer or enthusiast, along with a smart design, and decent overclocking features. I admit, what I pulled out of the box surprised me.

Most of the boards we take a look at here weigh a ton, because they have heatsinks, sometimes large, scattered around the board, in addition to numerous power phases, ports of various technologies all over the place, and more. The DP55WG, on the other hand, keeps things much more modest, and to most people, it’d be considered a “simple” board, and in all honesty, at first glance, this isn’t what I expected a $140 board to look like. 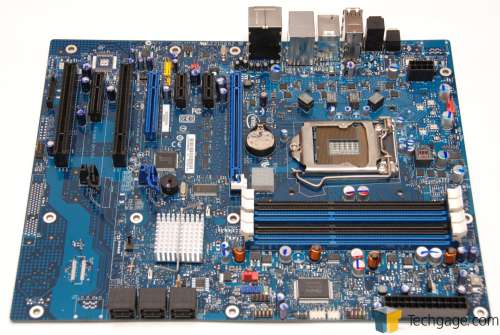 To be fair, Intel doesn’t release lackluster boards, despite the lack of fancy features that the more common vendors push out. Intel focuses on stability first and foremost, and that’s what its reputation for its motherboards is based on. Even its highest-end boards aren’t ideal for overclocking, and that right there explains its target audience. Not overclockers, not enthusiasts… but rather consumers who want a no-nonsense board that’s guaranteed to be built with stability, and reliability, in mind.

With that said, the board is kept simple, with not a single heatsink except on the southbridge, and even that is simple (that’s all it needs to be, though). There are a total of three fan connectors, all located at the most commonly-required places. There’s a four phase power solution, which is sufficient for light overclocking. Combined with that fact, though, and the absolute lack of heatsinks, I wouldn’t advise on overclocking a CPU too hard with this board. 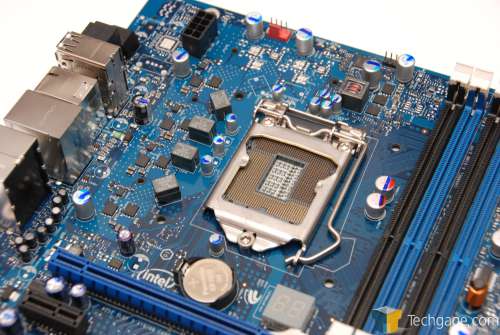 Like most other P55 boards, this one supports up to 16GB of RAM, in a dual-channel configuration. Both the motherboard power connector and ATX chassis connectors are located right here also. The ATX connectors are located in a far different area than on most boards, which locate it at the bottom, and while I’d prefer it there, I can’t complain too much about the location here. This is because most chassis’ I’ve dealt with in recent memory have had all the ATX cables tucked away right beside where this location is on the motherboard. Love it or hate it, I think the opinion of this will vary from person to person.

Also note the LED for BIOS codes… a nice touch (and if you don’t know why, then you’ve likely been very lucky with the reliability of your PC’s). 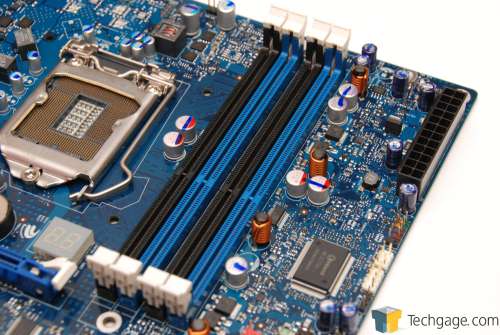 In the bottom right-hand corner, also known as the barest part of the motherboard, there are six S-ATA ports available, with the BIOS reset switch located right behind them. To the right are two internal headers for USB, and one for FireWire. 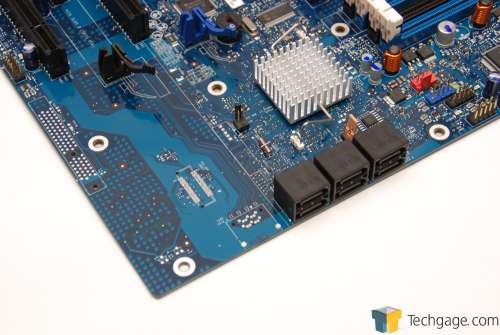 In way of expansion ports, Intel has opted to include 3x PCI-E slots for graphics cards (tri-GPU CrossFireX would run at 8x, 8x, 4x, while dual-GPU would be 8x, 8x). Also here are two PCI-E 1x slots, in addition to a single legacy PCI slot. 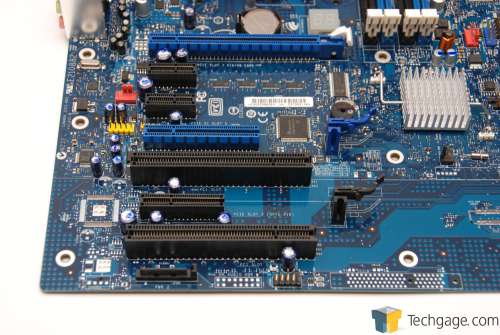 On the back I/O port there is 8x USB ports, a LAN port, FireWire port, S/PDIF in and out, audio ports and also a “Back to BIOS” button – one that forces the BIOS into maintenance mode on the next boot, in case of a failed oveclock. 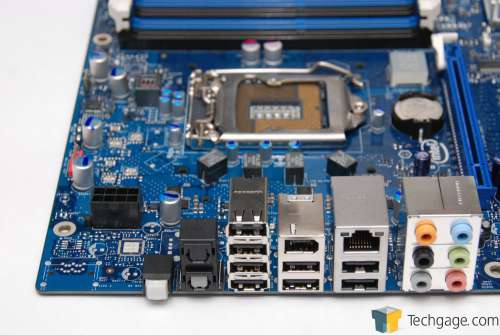 The DP55WG is without question the simplest board I’ve dealt with in a while, at least where physical components and design is concerned. But it does offer two things most other boards don’t in this price-range or form-factor… an IR receiver for media purposes, and also NVIDIA SLI support. These are two great additions depending on what you’d like to do with the board. If a dual purpose media / heavy gaming machine is in your sights, then the DP55WG is hard to beat.