When the time comes to write a “Final Thoughts” page for an Intel motherboard, I admit it’s a bit of a chore. The simple reason is that Intel’s enthusiast motherboards are rarely competitively-priced, so as much as I might have enjoyed using one, it’d be difficult to recommend based on price alone.

I don’t like weighing pricing into a conclusion for the simple fact that price sometimes doesn’t matter when a product is a knock-out. But in a saturated market like this one, where competition is often fierce, consumers have lots of choice. As such, it’s not easy to recommend a motherboard like this one, which retails for $220, over one that costs $70 less and offers a similar featureset.

That argument is senseless without a highlight of the pros and cons, so let’s tackle those. Intel’s become well-known for offering some of the most stable boards on the planet, so if ultimate stability is your first and foremost goal, you can never go wrong with an Intel motherboard. 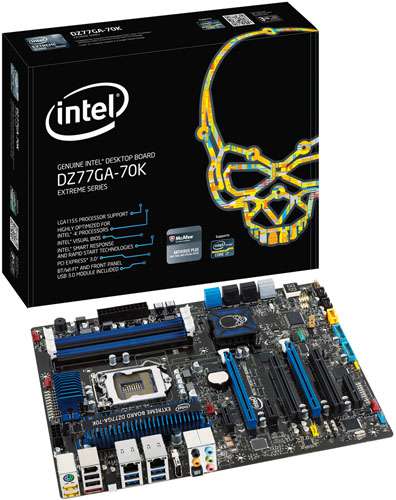 Compared to most boards at around the same price-point, the DZ77GA-70K offers the same amount of SATA ports and fan headers, though doesn’t offer a third x16 PCIe slot. While that might not matter to a lot of people right at this moment, it comes at the expense of including dual PCI legacy slots which is… strange for an enthusiast product. I could understand one maybe, but not two.

Another inclusion I find a bit odd is the dual USB 3.0 internal headers. I might expect that on a $300+ board, since those tend to go “all out”, but not on a board at this pricepoint. While USB 3.0 is clearly better than 2.0, with four such ports at the back and then two in the front, it’s doubtful most people are going to saturate half of those. These additions tack on $$ and won’t be used by many.

On the upside, Intel’s board does feature the best EFI I’ve ever seen, at least in terms of aesthetics. I’ve had brutal luck overclocking our Core i7-3770K on any board, so I can’t comment there. Intel does claim that its boards are designed for overclocking, however, much like we talked about with our editorial last spring.

For its $220 price-tag, I’m just not sure how I could tell you that Intel’s DZ77GA-70K deserves its. MSI’s Z77A-GD55 retails for $70 less, and while it does shave off two SATA ports and two USB 3.0 ports at the back, these are cuts that will sit well with most people. Most people don’t need more than 5 hard drives and an ODD, and most people are going to have just one or two USB 3.0 peripherals – certainly not 6. Intel does toss in a mousepad, but I’m willing to bet less than 10% of purchasers will ever touch it. Past that, it’s hard to ignore the fact that Intel’s board lags behind all the others in almost every-single test.

I guess in the end, I’d love to see Intel become more price-competitive in the future. If its boards are going to be priced at over $200, people should be able to look at them and immediately know that they’re worth it. Intel’s DZ77GA-70K does nail it when it comes to aesthetics, stability factor, and of course its EFI, but with some of its odd design choices coupled with its higher price, it’s impossible for us to outright recommend.