Intel has now officially released their P35 and G33 chipsets, so we are going to take a look at what they offer to the consumer. In addition to DDR3 support, there are a few other features to take note of, such as increased bandwidth and Intel Fast Memory Support which effectively lowers latency.

Intel today is taking the covers off their P35 and G33 chipsets, and we are going to take a look at what’s new and what you should expect. Due to tight timing, we are not giving our performance reports today, but will be later this week. Before we finish the article, we will also take a look at two other new chipsets due out later this year, X38 and G35.

The chipset many of our visitors will be most interested in is P35, which is placed in Intel’s extreme lineup and is the successor to P965. At first glance, it offers a few notable features over P965, such as DDR3 support. Saying that, it natively supports DDR2 as well, so this won’t be a full scale transition. This, is a good thing, as DDR3 will be far too pricey for most people, without a huge performance gain.

Also in addition is the support for 12 USB ports as opposed to 10 USB ports with P965. Another feature that I personally appreciate is the SATA port disable, which essentially allows you to disable an installed hard drive if you wish to have it invisible. This would be useful if you are trying to install an OS on each hard drive, but want an individual boot loader on each, instead of one boot loader that covers both drives.

To keep things simple, here is a chart that we have put together showing the direct differences between P965 and P35:

On the surface, not much has changed, although the addition of extra USB ports and eSATA might be welcomed by some. The memory bandwidth has been greatly increased if you choose to use DDR3. I believe they are using the reference of a 1333FSB CPU and DDR3-1066 memory, compared to a 1066FSB CPU and DDR2-800 memory on P965. The incredible differences in bandwidth make sense when that’s the case.

G33 is another chipset that Intel is unveiling which is targeted towards the mainstream consumer, or those with HTPCs. Performance wise, it’s positioned right beside P35 although has a few additional specific features that this particular crowd is looking for. Allow me to give another quick comparison:

New on the 3 series chipsets is Intel Fast Memory Access, which optimizes the available memory bandwidth and reduces latency. Although they don’t stress it, memory latency is likely a big issue for Intel considering the fact that they haven’t been able to touch AMD for a while, thanks to their integrated memory controllers. On the Intel side of things, that is something we will see with Nehalem.

To combat latency in the near-term, the new tweaks should provide better latency overall, providing better performance in memory intensive applications. In an example given, memory usage under the 3 series chipset proved 6% better in PC Mark 05 and 20% better in 3D Mark 06. How these scores were tabulated, I have no idea.

DDR3 is the biggest memory “advantage” to come along with P35 and G33, although it will not be for everyone up front. Prices are not going to be settled until memory kits are readily available, but you can expect to pay far more for a DDR3 kit of ram at launch. Anything less than $300 per 1GB would be considered a deal.

At this point in time, the benefits to DDR3 are just not there, given the price. Although it packs in a lot more bandwidth, it will not be noticeable by many, at least not until 1333FSB CPUs are finally launched. If you are an overclocker, you have likely surpassed the base DDR3 speeds of DDR3-1066 already anyway.

However, DDR3 speeds will greatly overshadow DDR2 over time, with DDR3-1333 kits sure to be available at launch. I know of pre-overclocked kits that are ready for sale that exceed even those speeds. Once DDR3 is settled in, we should be seeing DDR3-1600 (800MHz) kits, which may very well become the enthusiast “standard” soon enough. In the future, DDR3-2133 kits are expected, which may or may not be the top speed we will see from this architecture.

One benefit to DDR3 is that stock speeds will require less voltage than DDR2, 1.5v to be exact. This will be for all stock speeds based on the JEDEC standard. Yes, even DDR3-1333 will be stable on 1.5v, although at loose timings (CL=9/10). Bear in mind though, simply because DDR3 runs with less voltage, it does not mean that the chips will run cooler. In fact, that’s the exact opposite of the situation, as they often run noticeably hotter.

P35 will not be the only new chipset launched this year, as X38 and G35 will be making their appearances in Q3. Though similar to the chipsets discussed today, it will bring PCI Express 2.0 to the table in addition to dual x16 PCI-E graphics capabilities. G35 specifically will be coinciding with the launch of new integrated graphics, the X3500 which will offer DX10 and SM 4.0 support. 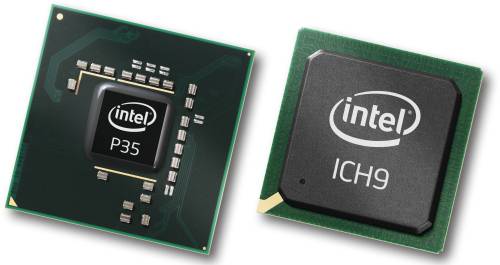 Although P35 information is publicly available today, most of the motherboards may not be available right away. The same goes for DDR3, if you wish to go that route. We will see an influx of availability once Computex begins in early June.

Should you jump on P35 right away? Reading around the web at performance articles should answer that question for you, but as it stands, there is no immediate reason to jump ship from your current setup. If you have a direct need for DDR3, or simply want it to say you have it, then by all means pick up a P35 board.

This will not be our last P35 article, and you can expect one later this week. We will also be regularly adding DDR3 reviews to our arsenal, although DDR2 is still sure to be the prominent seller for quite a while. Stay tuned for more in-depth looks later this week.