It wasn’t too long ago that we were all asking the question, “Should I go dual core?” Times have proven that dual core is the future and has clear benefits, which turned that question into, “Which dual core should I get?” Even if you are buying the lowest dual core on the scale, you are essentially getting twice the computing power than from a single chip. As more and more applications take advantage of dual cores, it makes the buying decision easier. Of course, the ability to multi-task without slowing your OS down is another huge benefit.

Intel and AMD both have a great selection of dual core chips, for all wallet sizes. Intel dual cores almost always cost less than AMD’s, which makes them look more attractive. Generally speaking though, tests have proven AMD dual cores better for gaming on high-end systems. But, if you are looking for a cheap solution to get yourself a dual core rig built, then Intels offerings are worth looking at.

Today’s processor in question is the 820 D. It was the bottom of the barrel when it came to Intel DC’s, until the lower clocked 805 D came out. But before we get into specifics and feature comparisons, let’s delve a bit deeper into why dual cores are beneficial to you.

PCs that have two CPU cores are not necessarily new, although it is for the consumer market. A few years ago, you would need two separate CPU’s in the same machine. You can now have the same benefit but with only one CPU. There was a lot of speculation when dual cores came to be, but there’s no denying just how beneficial they can be. Because you essentially have two CPU cores under the same IHS, multitasking proves less groggy with larger applications. As you open new instances of applications, the CPU will decide which core to use. The goal is to allow you to do more on your PC than with a single core, without having a sluggish experience.

Even though you have a dual core, things can still slow down your PC, but that primarily only happens with multiple intensive applications that are stressing the same components at once, such as ram or your hard drive. As a great example though, you could play a game and convert a video file at the same time and feel virtually no lag or slowdown. Try doing that on a single core and it will not be a fun experience. Because of these possibilities, it’s no wonder why dual cores are growing in popularity. 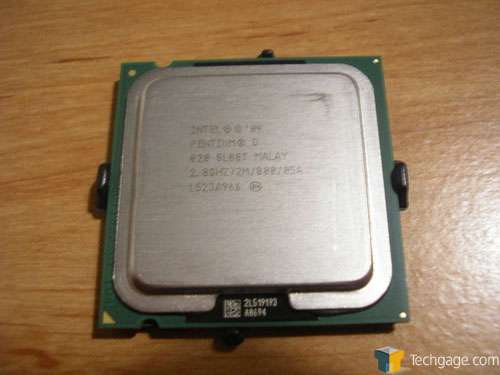 If we compare our 820 D to Intels other dual cores, we immediately see it’s missing a few key features. Considering this is a budget processor, it does not include EIST, or Enhanced Intel SpeedStep Technology. Also missing is the Intel Virtualization Technology. That specific feature is not available on any of the 8** series however, rather only the 9**.

At this point in time, when compared to Intels other dual cores, the 820 D seems like an unwise choice. If you were to consider the 805 D instead of the 820 D, there are a few things to consider. Most notably, the 805 D only has a 533FSB and is clocked 140MHz slower than the 820 D. Though the clock speed won’t necessarily make a huge difference, the FSB speed will.

The 920 D though, and the 9** series in general, has some larger differences. While the 820 D has only a 2*1MB level 2 cache, the 920 D has 2*2MB. This would not likely make a huge difference in most everyday tasks, but it should be evident through synthetic benchmarks. The largest different though, is the process the cpu is based on. The 820 D is built on the ‘last-gen’ 90nm while the 920 D is based on 65nm. What this generally results in is better overclocking ability, and cooler temperatures. Besides these points though, both the 820 D and 920 D share the same clock speed and FSB.

Below is a quick sum-up of all the Intel Pentium D’s currently on the market. Celeron D and EE Dual Cores are also available, but we won’t be getting into comparisons with them today.