Because the 820 D carries a ‘budget’ moniker, overclocking was going to be interesting. If you buy a high-end chip, you already know to expect good overclocking ability. When you take the low road though, it’s always hit or miss. My goal originally was to achieve a 4.0GHz, as unlikely as that may seem. Up until last month, the CPU was cooled using Corsairs Nautilus 500. That setup is how I acquired all my found overclocks. However, I have since moved the N500 into another PC, so the Zalman 9500AT is the current cooling in place.

I chose to skip overclocking using the stock cooler, because temps were far too high. Of course if you do plan on doing any overclocking, you should almost always upgrade to an aftermarket cooler.

Using the water cooling, the max overclock I have achieved was 4.2GHz. Though this was rather unstable, and put me in an odd predicament. After some troubleshooting, I had found that one of the cores was not as overclocking friendly as the other. I came to this conclusion because Windows would not boot at 4.2GHz, but if I changed it to 4.2GHz when Windows was already loaded I would have no problems. While in Windows at 4.2GHz, the CPU proved 10 hours Prime95 stable. 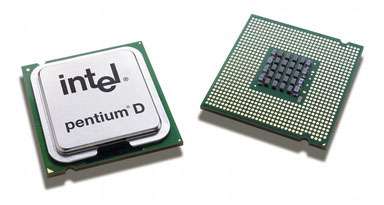 Here’s another oddity. When I ran that 10 hour prime run, it was only on the single core. The second core was left completely alone, because I wanted to first see if 4.2GHz was stable using the CPU as a single core. Once that passed fine, I opened up another instance to run on the second core, to which I immediately had errors. Stranger still, is that if I chose either core to stress test, one at a time, I would run into no errors. It was only when I stressed them both at the same time that the second core would error. The first core has never failed in any of my overclocking tests.

After some more investigation, I came to the conclusion that the main problem had to do with the 64-bit part of the second core. At 4.0GHz, Windows x32 booted no problem, over and over. But, trying to boot into Windows x64 at the same clock would fail everytime. It would either give an abrupt BSOD or restart during the Windows boot screen.

3.92GHZ seemed to be the ultimate stable overclock, for both versions of Windows. I will consider that my top overclock, although yours may vary if you get a CPU with two friendly cores. Regardless of the 4.0GHz+ problems, I will gladly take 3.92GHz on a sub $200 dual core any day.

Here are the overclocked settings I will be benching with. All of these have proved 100% stable. Of course this could have been eight separate overclocks, but there was no need. 3.36GHz was completely stable using the stock cooler, however I didn’t go beyond that until I had the better cooling solution. Using the Zalman 9500AT, the CPU was completely stable up to 3.74GHz. 3.92GHz is hit and miss though, in a couple regards. First, at that clock speed, Rosetta had run for 44 straight hours without a single issue. That was with the CPU at 73°C for almost two days straight. However, when it came to a couple benchmarks, we will see that the increasing heat on the CPU held back from some great scores.

The primary reason that the CPU could reach 73°C to begin with is due to my rooms ambient heat. Even on a cool day, the room hovers between 80°F and 90°F. It doesn’t prove to be the ideal testing environment, but it could not be helped. That said, if you have a computer room that’s kept at comfortable temperatures, your results may prove better than mine.

Throughout all of our benchmarks, regardless of what we are reviewing, testing is done in a clean, stand-alone version of Windows XP Professional with SP2. Prior to testing, these conditions are met:

Since this is the first Intel chip that we’ve reviewed, we don’t have any means to compare to other similar CPU’s.