Sandra is an extensive benchmarking tool used to stress and test multiple components in your system. The Arithmetic test is a hardcore math test that Intels always prove to be great at. The Multimedia test is another one that usually sways in Intels direction due to the better SSE units, and is primarily based on how fast your CPU will render multimedia data.

There are not that many applications that will use both of your CPU cores at once, but many benchmarking tools do. Such as Sandra, these scores are almost twice as high as my single core AMD can pull off. At 3.92GHz, the air cooler is having a hard time keeping the CPU at a normal temperature, which results in lower scores.. namely in the multimedia test. The 3.74GHz scores are superb though, for not even being on water. 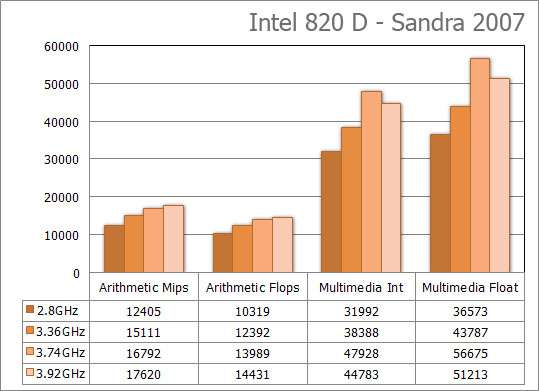 Everest takes similar tests as Sandras, but work quite differently. CPU Queen is a large computation using a virtual chessboard. It uses the CPU power to calculate an outcome. PhotoWorxx is just as you’d expect… a photo processor. Of course you don’t see anything that’s going on, because it’s just calculating, not outputting. Julia and Mandel both measure single precision FP’s, and is based on the Assembly coding language. What sets them apart is that Julia calculates in 32-bit while Mandel is 64-bit.

The CPU tests in Everest also heavily benefit from dual cores. The Queen and PhotoWorxx scores are as you would expect for these speeds, but the Julia and Mandel are actually far higher than I had thought they would be. Intels math processor to the rescue. 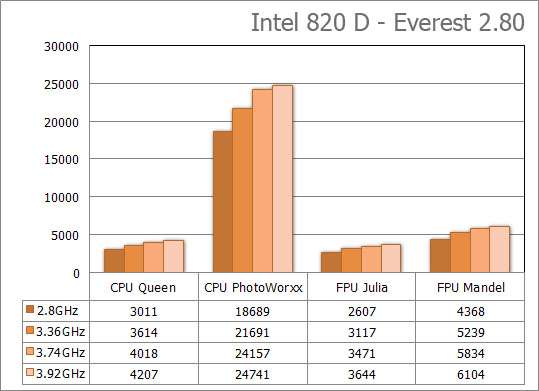