Both of the following programs are great for stressing your CPU. Usually if your CPU is borderline stable, PC Mark will end up crashing your computer. Needless to say, it’s one of the tools I use to assure myself that I have a steady overclock.

3D Mark 2006s CPU test is far different than PC Marks, because it’s more gaming specific. While the 3D action is held back to 2FPS, it will compute the entire scene using your CPU. Obviously, the better the CPU you have, the better the score. Like our Sandra score, the 3D Mark 06 score at the max overclock was found slower than 3.74GHz, due to the heat. 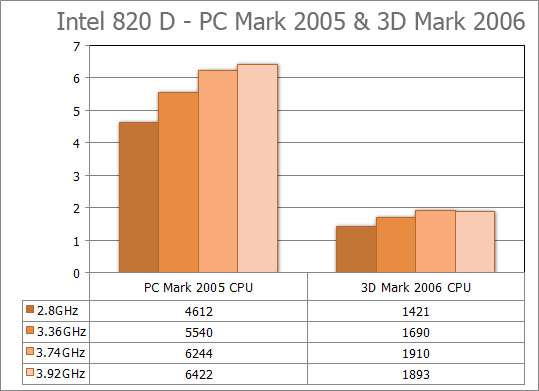 So it’s 2006, but I am using a program from 2001? 3D Mark 2001 proves to be an enthusiast favorite for benchmarking your CPU, because it’s amazingly CPU dependent. Since our video cards are far better today than they were back in 2001, the test benefits clearly from more CPU power, rather than GPU power. Yet again, the max overclock proved a lower score. With proper water cooling, this would not happen. 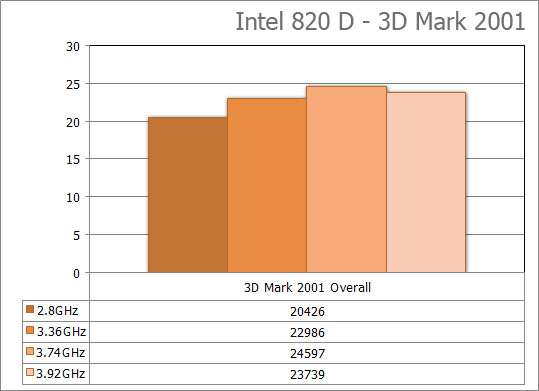 For our gaming benchmarks, I chose to use Half-Life 2 and Battlefield 2. While Half-Life 2 is incredibly CPU dependant, BFII is more GPU dependant. To test, I used each successful overclock, and then played the game for 5 straight minutes. The average FPS information was recorded using FRAPS. For HL2, I used the level d1_canals_08, and maxed out settings at 1280*1024. For BF2, I used the FuShe Pass level with default settings at 1024*768. While it could prove to make more sense to play through the game at the lowest resolution possible, I am more interested in seeing if there is any benefit at standard settings.

All of the runs were manually played, not time demos. Because of this, each run could prove different with varying instances of action on the screen. 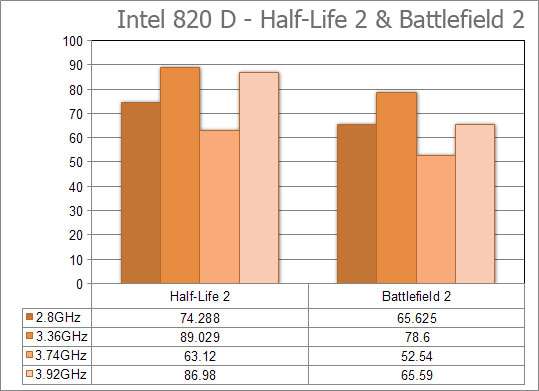