This may seem like an odd bout, and it is. The 820 D is a dual core Intel and the 3200+ Venice is a single core AMD. Obviously, these results should not be used to see which is better, because obviously the dual core should win most of everything. Since the Venice is the only other chip I have on hand, it is still interesting to see how they will compare.

Since 3.92GHz was the max stable overclock I could do with the 820 D on air, I used my previous max air overclock with the Venice also, which was 2.7GHz. Here are those system specs. Both of these overclocks, though different architectures, are pretty close to one another.

I split all the results onto two separate graphs for easier reading. As mentioned earlier, you can easily see the benefits that dual core can offer. We can also see Intel specific benefits with the math processor in the Julia and Mandel tests. They are more than double what the AMD could muster. 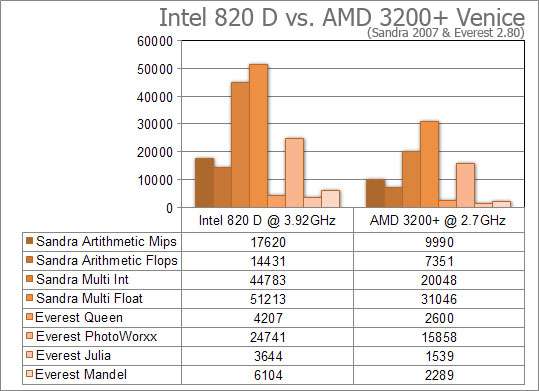 Things start to get interesting with even more benchmarks. While the Intel beat out the AMD chip in the Moldyn test, it was vice versa for the Cipher. Since the AMD is single core, it could not do a 2x test in Cinebench, but even as a Single core, it beat out the Intel here. The AMD proved faster in each and every Super Pi test also. 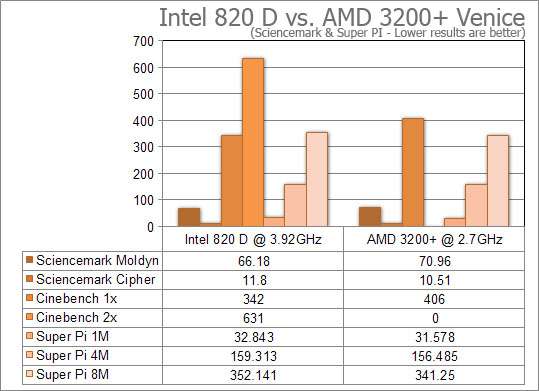 Once again, these tests should not be taken -that- seriously. A more fair comparison would be comparing a single core equivalent to the 820 D, or even comparing the 820 D to an AMD X2 in the same price bracket. Still, the results proved interesting for what they are worth.

The 820 D proved to be a great CPU, especially given it’s cost. For $175US, you can have a great dual core cpu in your rig. I compared the 820 D to my Venice 3200+, which cost $270 when it was new. Just a year later, you get twice the power for less money. That being said though, it’s hard to justify a recommendation. Let’s take a look at the current price list once again.

If you were very budget conscious, then the 805 D may be a good choice for you. At $120US, it lacks some of the power that that 820 D provides, but has been known to overclock to 3.8GHz with water cooling. If you were to step up and purchase the next step up, you would have to check out some of the better options. While the 820 D currently retails for $175, the 930 D retails for $200.

For the extra $25 it would cost you, you get a faster chip with more cache, and based on a 65nm process. If you are planning to pick up the chip for overclocking and plan to use water, it would be almost foolish to not spend the extra for the substantially better CPU. One thing to also bear in mind, is that not all new Intel boards will support the 820 D. The ones that do, usually cost a little more. Generally, I have found that the less expensive motherboards support the bigger dual cores. So you will really want to shop around, because getting a board to support a 820 D will probably cost more than a 930 D and a supportive motherboard.

Times are good though. With Conroe right around the corner, we will be seeing the prices drop even further. In fact, rumor says that we should be seeing some drops in the coming days. But then the next question would be, should we just wait until then? With the Conroe performance benchmarks around the web, it’s hard to know for sure. If you are in need of a PC now, then I wouldn’t hesitate to pick up the 820 D or 930 D or anything in that general area. If you are able to wait, then do it. If Conroe lives up to the hype, it should be well worth the wait.

If you would like to discuss this review, feel free to head on into our related thread to throw your comment. You do not need to register in order to reply to our content threads.