by Rob Williams on December 29, 2008 in Processors

Need to upgrade or build a brand-new PC, but are on a very limited budget? If you don’t mind making some small sacrifices, Intel’s Wolfdale-based Pentium Dual-Core E5200 is worthy of serious consideration. Despite retailing for only $80, it offers solid performance and some incredible overclocking headroom.

Intel’s Core i7 processors have now been available for close to a month-and-a-half, but for those looking to spend as little as possible for a new rig, i7 shouldn’t be the first choice for reasons we laid out in our launch article early last month. Though i7 offers stellar performance, it requires a new motherboard, RAM and CPU cooler. While most people who pick up the E5200 might be in the same situation, the parts are much more affordable all-around.

While browsing an e-tailer a few weeks ago, I stumbled on Intel’s Pentium E5200, a dual-core offering that I had forgotten all about. It was launched this past August to virtually no fanfare, and thanks to a few things that were going on at the time (IDF, NVISION), I never thought about it since. I did want to get one in though, because although it carries a few caveats, it’s still a Wolfdale chip, and at under $100, I figured it might very-well be a steal.

Intel currently offers two Pentium models based on the 45nm process, the E5300 and E5200. The differences between them are a mere $2 (per 1,000) and 100MHz. We chose to bring the E5200 in for the simple fact that it’s the least expensive model out there from Intel, at least of which uses their latest technologies, such as 45nm.

The Pentium Dual-Core chips do have two primary drawbacks, though, which include 2MB of L2 Cache and absolutely no part of Intel’s SSE4.x instruction set. What that means is that more expensive chips (even the E7200), will have the ability to recode video that utilizes these instructions much, much faster. For those who don’t encode video all-too-often, the loss won’t be noticed. 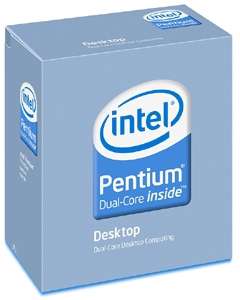 Another drawback could be the low Front-Side Bus speed of 800MHz. That equates to a raw value of 200MHz, which means the maximum memory speed supported at stock is DDR3-800. Considering that no memory manufacturer produces kits with only that speed supported, it goes to show just how lacking that is. As we’ll see later, overclocking is a super-quick fix to this issue.

The least-expensive Quad-Core to purchase right now is $193, and that’s at lower frequencies than the Pentium we’re looking at here, but with the same cache. The FSB is higher, but our E5200 is looking like a great value from these specs alone. The Pentium Dual-Core models are both well under $100, with the next-step up being the E7200, at $113 (per 1,000). That chip has the advantage of being 30MHz faster, inclusion of the SSE4 instructions and also an extra dash of cache.

There isn’t too much more that can be said about this chip, but that’s a good thing. It’s quite similar overall to previous Wolfdale chips. It lacks the SSE4 instructions, but to some, that might not matter. It also lacks as much cache as the next-step-up, but again, that might not matter to those who don’t use multi-media applications often.

Even without looking at the benchmarks, for $80, it’s likely hard to go wrong with this CPU, as long as your needs aren’t too intensive. Even if they are, overclocking might provide the extra boost you will need, and as we’ll see later, this chip is pretty-much begging to be overclocked, thanks to it’s 12.5x multiplier.

So let’s get right to finding out this chip’s weaknesses and strengths! But first, a quick review of our testing methodology is in order, and then we’ll jump right into our results, starting off with SYSmark 2007.